We oppose the jailing of journalist and blogger Craig Murray and demand the overturning of his conviction and immediate release. His sentence is massively disproportionate and a chilling attack on journalists, freedom of speech and democratic rights. 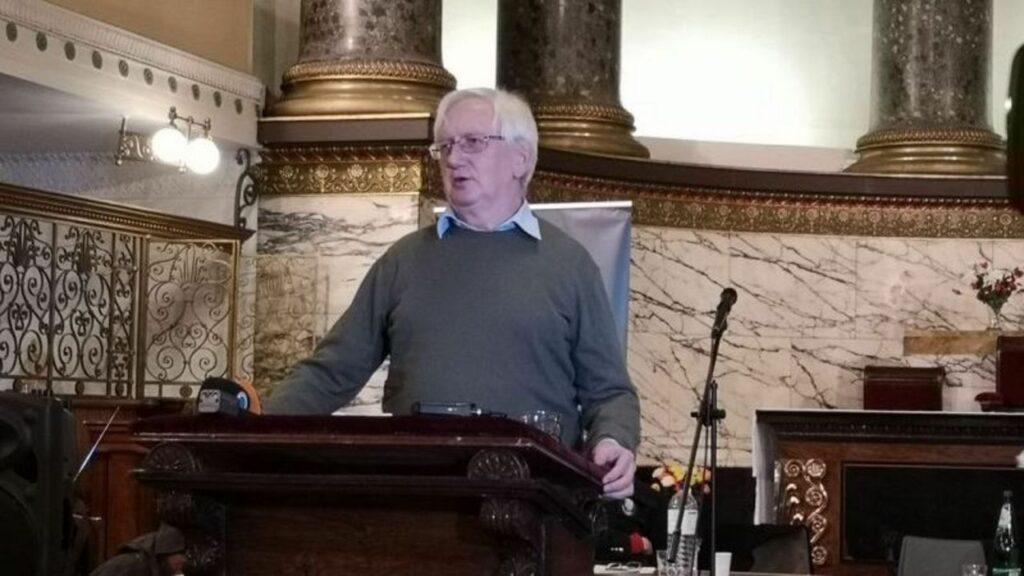 30 Jul 2021 – Yesterday, Murray was informed that the UK’s Supreme Court refused to hear his appeal against his sentencing for a punitive eight months by a Scottish court.

Murray, a 62-year-old former British diplomat to Uzbekistan who is in poor health, will start his sentence imminently. His defence campaign said in a statement Thursday evening that he would “surrender himself to police shortly and begin to serve the custodial sentence handed to him”.

“This blog will be going dark for a few months… I am well aware that the last few weeks I have posted very little, because the constant worry of having a jail sentence hanging imminently over my head, which became very oppressive. For the last several Friday afternoons I was watching the clock until the time came when I was confident no warrant would come and I could have another weekend with my children.”

One of Murray’s children is aged 12 and the other just five months.

Last month, Murray’s wife, Nadira, blogged that his health situation meant that he is “not suitable for prison”. He has “pulmonary hypertension, APS and atrial fibrillation, among other illnesses”.

Upon finding out that her husband was being jailed, Nadira wrote Thursday, “Today is the most heartbreaking day. My husband whose health has been found to not be suitable for prison must hand himself in for detention within hours following the UK Supreme Court’s decision not to hear his appeal… This is not a just punishment, this is a deliberate attempt to break the spirit of anyone brave enough to make use of free speech.”

Murray was found guilty in March for his reporting on the 2020 trial of former Scottish First Minister Alex Salmond. Murray was found to have published articles which “seriously impeded or prejudiced” Salmond’s trial by breaching contempt of court legislation “preventing the publication of the names and identity and any information likely to disclose the identity of the complainers” against Salmond. Salmond was acquitted on all 13 charges of sex offences, including attempted rape.

Murray is an advocate of Scottish independence and a supporter of Salmond. His blog stated that the case against Salmond was the outcome of bitter factional warfare raging between the Scottish National Party (SNP) leadership, the top echelons of the Scottish state and Salmond himself.

As the WSWS noted,

“In his blog, Murray attempted to draw attention to the closeness of the complainants to [SNP First minister Nicola] Sturgeon, and to indicate the orchestrated nature of the moves against Salmond, without naming names. He repeatedly made clear he supported the legal right of anonymity in sex cases and in his articles sought to stay within legal boundaries.”

He was sentenced the day after the Scottish election, on May 7, with the final decision announced by Lord Justice Clerk, Lady Leeona Dorrian—Scotland’s second-most senior judge. Dorrian had been the judge in Salmond’s trial. Dorrian and two other judges, Lord Menzies and Lord Turnbull, ruled that articles by Murray, read along with other material in the public domain, would allow a “jigsaw” identification of a number of the complainants in the Salmond trial.

Murray would have been in jail soon after the May sentencing as he was told to hand himself in to a police station within 48 hours. His lawyer managed to extend this timeframe to three weeks to allow Murray time to prepare an appeal.

Dorrian refused permission to allow the case to go to the UK Supreme Court. However, Murray used a mechanism in law allowing potential appellants to appeal directly to the Supreme Court.

Murray appealed to the Supreme Court on the basis of his right to report being denied through an “extraordinary, impossibly strict application of ‘jigsaw identification’” and of “fair process having not been observed”.

The appeal was thrown out by the Supreme Court with no explanation, with a spokeswoman saying only, “We can confirm that the application has been refused.”

The Craig Murray Justice campaign noted the grave implications of his jailing. “Legal precedent will be set tomorrow as Craig Murray will be the first person imprisoned on the charge of jigsaw identification in the UK, and indeed in the entire world.” It noted that “Murray is the first person to be imprisoned in the UK for a media contempt for over 50 years, and in Scotland for over 70 years.”

“I go to jail with a clean conscience after a Kafkaesque trial. I genuinely don’t know who I am supposed to have identified or which phrases I published are said to have identified them, in combination with what other information in the public domain. This judgement will have a chilling effect on reporting of the defence case at trials, to the detriment of justice, and the different treatment of blogs and approved media is sinister.

“I carefully protect the identities of the accusers in my report.”

The Scottish appeal judges claimed that Murray’s articles were not in the public interest, and that he had to be treated differently as a “journalist in new media”. Their ruling insisted, “it is relevant to distinguish his position from that of the mainstream press, which is regulated, and subject to codes of practice and ethics in a way in which those writing as the applicant does are not.”

Several mainstream reporters of the Salmond case published information that could, along with other items, also have contributed to complainants being identified, yet only Murray was accused of contempt.

Murray is serving an eight-month sentence despite identifying no-one in the Salmond case in his writings. Yet, in February, Scottish independence activist Clive Thomson was given a shorter sentence of six months for twice publishing the names of women who gave evidence at the Salmond trial on his Twitter account.

The railroading of Murray into prison is the culmination of a politically motivated witch-hunt. For well over a decade, he has been outspoken in defence of human rights and has opposed torture sanctioned by the intelligence agencies. Based on his first-hand knowledge of the criminal inner-workings of the British state, Murray said, in an internal report leaked to the Financial Times in 2004, that Uzbek officials tortured prisoners to extract information. Murray alleged that the intelligence was used by MI6 after being passed on by the CIA.

For the last decade, Murray has been a trenchant defender of jailed journalist and WikiLeaks founder Julian Assange. Murray’s defence campaign statement notes that he “had recently been called as a witness in a case brought by Spanish state prosecutors against UC Global for allegedly acting on behalf of the CIA in covertly spying on Julian Assange in the Ecuadorian Embassy. Material before the Spanish court includes several hours of covert surveillance video of Murray in private conversation with Assange on the future of Assange and Wikileaks. The Scottish court removed Murray’s passport expressly to prevent him traveling to Spain to testify.”

Murray said of his own persecution, “I believe this is actually the state’s long sought revenge for my whistleblowing on security service collusion with torture and my long term collaboration with WikiLeaks and other whistleblowers.”

Murray’s defence campaign will appeal his sentence and jailing at the European Court of Human Rights “via all routes required”.