The Media Yawns at the Israeli Army’s Death Squads

Israeli terror is at it again. The Israel Defense Forces’ death squads chalked up another successful week: four bodies of innocent Palestinians piled up between the two Fridays. There doesn’t seem to be a connection between the four incidents in which four sons were killed, but the link cannot be broken.

In all these cases, soldiers chose shooting to kill as the preferred option. In all four cases another way could have been chosen: Arrest them, aim for the legs, don’t do anything or simply don’t be there at all. But the soldiers chose to kill. It’s probably easier for them that way. 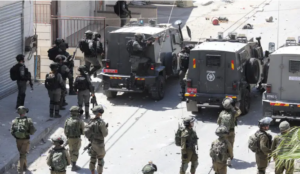 They killed a 12-year-old boy and a 41-year-old plumber. They killed a 17-year-old youth and a 20-year-old young man attending a funeral, all in one week. An Israeli slogan during the 1948 war went “To arms, every good man,” leading later to the concept of the IDF’s “purity of arms.” Four in one week, for no reason, with no hesitation, with no terrorist facing them. Four executions of young men with dreams, families, plans and loves.

None of the four endangered the soldiers, certainly not in a way that justified lethal fire. Thirteen bullets at a car driving by innocently, carrying a father and his three small children. Shooting a plumber holding a wrench and claiming that he was “moving rapidly toward the soldiers.” Three bullets at the stomach of a 17-year-old who was on his way to take his brother home.

It could be less horrific if the Israeli media bothered to report on it, possibly shocking Israelis. It could be much less horrific if IDF commanders took the necessary steps given their army’s murderous recklessness. But most of the media believed that the killing of a child interests no one or is unimportant, or both, so this shocking incident wasn’t reported on.

If the soldiers had shot a dog – also a shocking act, of course – it would have attracted more attention. But a dead Palestinian child? What happened? Why should it interest anyone, why is it important?

Let’s leave aside the media of trivia and nonsense that was busy to the hilt with the modeling agent suspected of sexual misconduct and with lists of pedophiles – what does the media have to do with the killing of children? The question is: Where are the military commanders and the political leaders?

Their disgraceful silence leads to only one conclusion: They believe that this killing is acceptable. It’s exactly what they expect of soldiers: the killing of innocents. There is no other way to explain everyone’s silence without even a semblance of condemnation.

If the killers of the boy Mohammed al-Alami are still not in custody, then the IDF under Chief of Staff Aviv Kochavi – a person known to speak in lofty terms about values – is saying that the soldiers acted correctly. If the paratroopers who killed Mohammed Tamimi by firing three bullets into his body from their armored jeep are still walking around freely in the West Bank, this means the army salutes them.

And if the IDF salutes them, we really are talking about death squads, just like in the most dreadful regimes.

This article is reproduced in its entirety