Twitter Will Allow You to Deny the Genocide of Palestinians, but Not a ‘Uighur Genocide’, So I’ve Been Banned 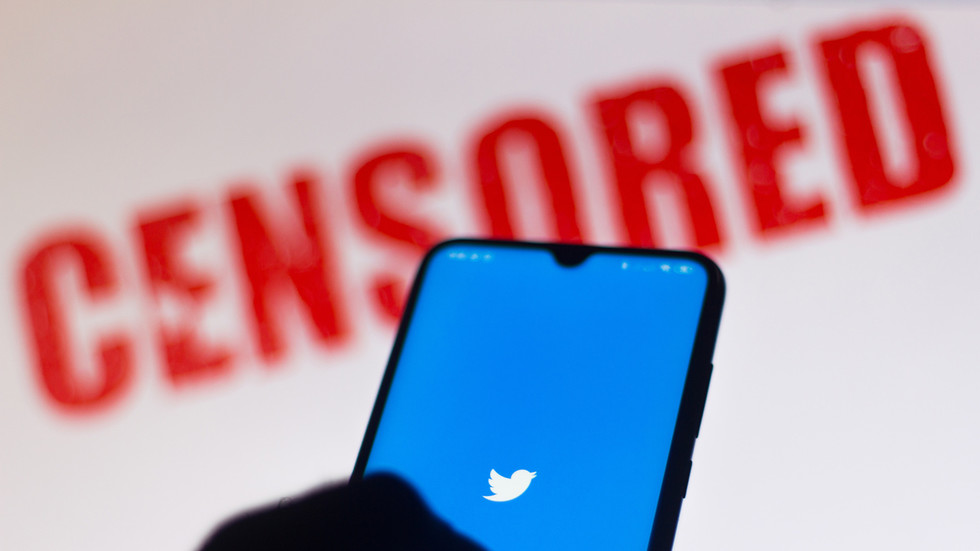 7 Aug 2021 – Big Tech censors are shutting down voices like mine, because they don’t like me exposing the truth of what’s going on in Palestine. But they’re happy with tweets about killings in Xinjiang, even when there’s no evidence for it.

Twitter has a bizarre new policy of censoring political discourse around ‘violent events’. On the 21st of July, I woke up to find my account was locked for supposedly violating “rules against abuse and harassment”. I have had my account for 10 years and amassed a following of 150,000. I use it, or rather used to, to share my articles and interviews. The flagged tweet stated:

“There is a genocide against Palestinians. But there’s no Uighur genocide. There is evidence for one but not the other. We can see Palestinians being slaughtered. On top of which Israeli leaders have admitted they want to exterminate Palestinians. The truth shall set you free”.

The only thing that was wrong in this tweet was that “the truth shall set you free”. Turns out, the truth shall send you to Twitter jail. I do not believe my tweet violated Twitter’s terms and conditions, which makes this scenario all the more insidious. It means that any tweet in the future, no matter how innocuous, could get you censored. Rather than accept Twitter’s demand to delete the tweet and get back my Twitter after 12 hours, I decided to take a stand by appealing the decision. 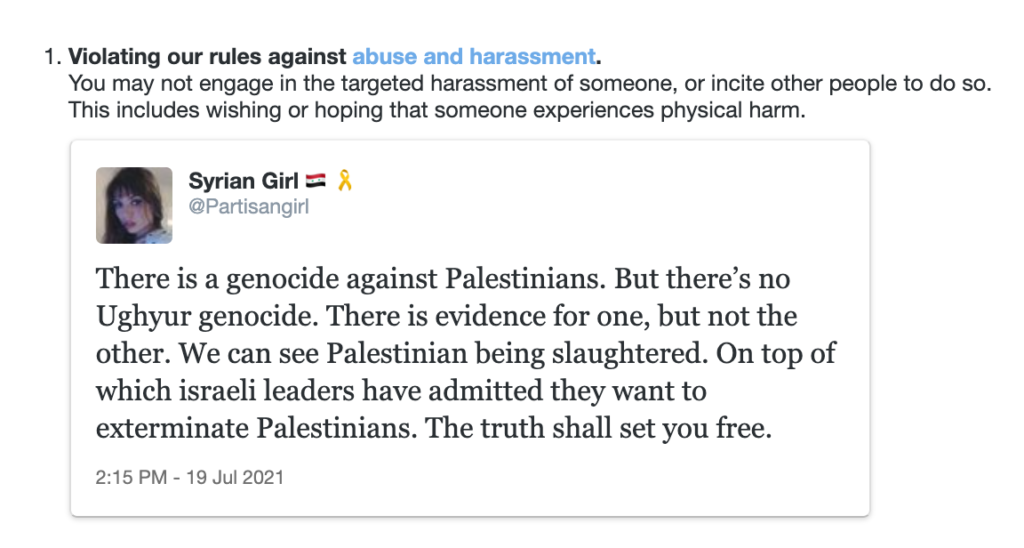 I’m no stranger to censorship by Big Tech. In 2018, I woke up to find that my Facebook account of 40,000 followers had vanished alongside a slew of headlines that the British government had deemed me a “Russian bot”. After a series of videos and interviews which proved that I am, in fact, human, my account was restored without any acknowledgement of, or apology for, what had occurred.

I’m not unique in my experience of such censorship. I am one of many people who have been unceremoniously silenced on social media, sometimes without a reason given. The demand for censorship by special interest groups has increased to the point that Big Tech have had to relegate the job to artificial intelligence, which gets things wrong about half the time.

This is what I had initially assumed had occurred with my tweet, that it was all a mistake that would quickly be rectified once a human moderator reviewed it. Wrong. That was almost two weeks ago, and my tweet is still, apparently, under appeal. A quick Google search revealed that many people have waited months without any human oversight over the appeals process. I decided to email Twitter support. But what I heard back was even more shocking.

“We’re writing to let you know that your account features will remain limited for the allotted time due to violations of the Twitter Rules, specifically our rules against abusive behaviour and denial of violent events.”

It appears Twitter has now deemed questioning the lack of evidence for a “Uighur genocide” as a “denial of violent events” and hence a thought crime. Yet there is currently no United Nations body which has concluded that there’s such a Uighur genocide going on. Even journalists writing in The Economist and the Council of Foreign Relations (CFR) have questioned whether the genocide label is the right fit for what is happening to Uighurs in China’s Xinjiang province.

In fact, no one is even accusing China of conducting mass killings of Uighurs, or a ‘violent event’ in Twitter’s terms. What has been claimed is that China is putting Uighurs in a prison camp. China says the men are being put in “vocational education and training centers”, and says they have terrorist sympathies; the US contends that they are being put into the camps simply for being Muslim.

I am originally from Syria, so I know all about war and genocide. I also know that up to 5,000 Uighur fighters joined Al Qaeda to fight against Syria and that terrorism has been a real threat faced by both Syria and China. Regardless, a prison camp does not constitute a genocide; if it did, the US would be charged with genocide for having put Uighurs in Guantanamo Bay for the last 20 years. Let alone the mass incarceration of its own peoples, many of them disportionately black, in ordinary jails.

Wayne Dupree: The Biden administration using Big Tech to censor our questions and concerns over vaccines is a slippery slope

This goes to show the hypocrisy of how Twitter selectively implements its rules. You will not be censored off Twitter for denying the genocide of Palestinians. Even though there is decades of undeniable evidence of systematic massacres and ethnic cleansing of Palestinians by the state of Israel. Palestinians are kicked out of their homes, thrown in jail or killed simply for the ‘crime’ of being Palestinian. They’re not allowed to raise their own flag, retain their identity or even move freely in their own land. In contrast, there is no evidence nor even an accusation of massacres against Uighurs. Ironically, it is the existence of this double standard that my tweet tried to highlight, and Twitter’s censorship has proved my point.

The narrative of the ‘Uighur genocide’ is the latest humanitarian crisis thought up by Washington to justify the next war, and Twitter is selectively censoring anyone who dares question that narrative. Lest we forget how many millions have died across the Middle East thanks to the US, based on exactly such lies. The babies in incubators that sold the first Gulf War. The non-existent WMDs that sold the war in Iraq. The lies about Gaddafi using black mercenaries in Libya. The lies about Syria’s chemical attacks which were used to justify multiple bombing campaigns and the current occupation of that country by the US and its stooges. An occupation that, along with sanctions, is starving 17 millions Syrians of bread and fuel. These lies, that Twitter is denying us the right to question, are what cause real violence. By selectively choosing which claims of violence can and cannot be denied, Twitter has become an echo chamber of the US State department.

It would be remiss not to mention the pro-Israel lobby’s involvement in this. It’s possible the reason for my censorship has more to do with the declaration of a Palestinian genocide than the lack of evidence for a Uighur genocide. My Twitter account was recently mentioned in the Israeli media for defending former Senator Cynthia Mckinney’s right to free speech. It cannot be a coincidence that my Facebook account was also recently locked twice for posting a video that compared Israel to ISIS. I’m also a frequent target of the infamous pro-Israel wikipedia editor “Philip Cross”, who attempts to defame me and many other prominent anti-war voices. It’s possible we are being targeted for our pro-Palestine stance, and any excuse will do to silence us.

What’s the solution to this censorship? It is inevitable that we must migrate to social media alternatives to Big Tech. Twitter alternatives such as PanQuake and GAB, and YouTube alternatives such as Bitchute and Odysee, could eventually overtake the giants. In the meantime, we must take a stand for free speech wherever possible. I reached out to Twitter to give them a chance to comment, but I have not heard back. If you’d like to question them on their censorship, please feel free to tweet this article at @Twittersupport.

Maram Susli is a Syrian-Australian political analyst and commentator. She has written for Journal New East Outlook and Sputnik UK as well as being interviewed by France24 and Sky News, among others. Follow her on Twitter @partisangirl (when she’s not banned) and YouTube SyrianGirlPartisan