And the least secret agent of all . . . Agent Orange!

On August 10, 1961, the United States, several years before it actually sent troops, started poisoning the forests and crops of Vietnam with herbicides. The purpose: to deprive our declared enemy, the commies of Ho Chi Minh, of food and ground cover that allowed them to trek from North to South. It was called, innocuously, Operation Ranch Hand.

Agent Orange, the most powerful of the herbicides used in Operation Ranch Hand, contained dioxin, one of the most toxic substances on the planet. We dropped 20 million gallons of this and other herbicides on Vietnam, contaminating 7,000 square miles of its forests. Half a century later, we are fully aware of the consequences of this strategic decision, not just for the Vietnamese, the Laotians, the Cambodians, but also for many American troops: hundreds of thousands of deaths and debilitating illnesses, horrific birth defects, unending hell.

History, in all its moral primness, has relegated our use of Agent Orange to the status of “controversial.”

Much to my amazement, I learned the other day that August 10 is now a day with official status. Numerous international organizations, many of them Vietnamese, have declared it Agent Orange Awareness Day. 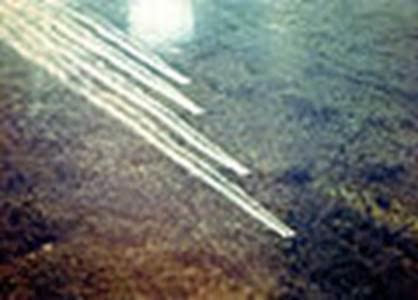 I say, let’s keep this awareness alive and evolving at least for the next decade, which is how long the United States continued to wage its chemical warfare on Vietnam, Laos and Cambodia. And they didn’t wage it in ignorant innocence. Top military leaders, whose personal lives, of course, were unaffected by Agent Orange, were fully aware of its toxicity.

This raises what I choose to call The Question from Hell: How is it possible to make such a decision — to place short-term military strategy ahead of moral restraint and compassion for civilians? And this leads to a second, larger question: Why are military and political leaders so unwilling or unable to envision the long-term consequences of their decisions, that is to say, the consequences that utterly transcend the significance of the war they’re trying to win? Why are they so indifferent? Why are they so . . . stupid? 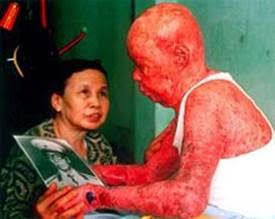 A Vietnamese victim of Agent Orange, dramatically demonstrating one of the dermatological expressions of the disease.

Pondering these questions was how I spent Agent Orange Awareness Day. Whether the U.S. won or lost the war, stopped or failed to stop the communist dominoes from tipping, the landscape would still be ravaged, the infected would still be dying, newborns would still have shocking birth defects (missing limbs, extra limbs, misplaced organs and so much more).

As the War Legacies Project notes on its website, the U.S. was trying to fight an “invisible enemy” who was hiding in the jungle, living off the land, by — what’s the big deal? — killing the jungle itself. As a result: “Ever since the war’s ending, the people of Vietnam, Laos and Cambodia have been saddled with an invisible enemy of their own.”

To sum it up as simply as possible, war is insane — and growing ever more so. The military establishment isn’t just brutal and cruel. It is so advanced in the technology of lethality that its capable of destroying the world. Hasn’t the time come to defund war — completely! — and rethink how we deal with conflict?

Well yes, of course, but we all know this isn’t going to happen. Nonetheless, the creation of Agent Orange Awareness Day could well be a moment of human awakening, a chance for there to be a collective focus on that Question from Hell: Why?

Here’s a starting place, thanks to psychologist Albert Bandura, as quoted by Russell P. Johnson in an essay published by the University of Chicago Divinity School. In essence, Bandura has sought an answer to the Question. What gives political leaders the wherewithal to violate basic human values — established moral standards — and perpetrate the inhumanity of war?

He calls the phenomenon of doing so “moral disengagement” and posits four forms that this behavior takes:

Agent Orange Awareness Day, as I noted, was Aug. 10. I think we should spend the rest of the year honoring War and Dehumanization Awareness Day.

One Response to “War, Herbicides and Moral Disengagement”