Amazon: In the World’s Largest Reservoir of Biodiversity, Two-Thirds of Species Have Lost Habitat to Fire and Deforestation

A new report finds that up to 85 percent of threatened animal and plant species have had their habitat damaged by mining, agriculture or logging. 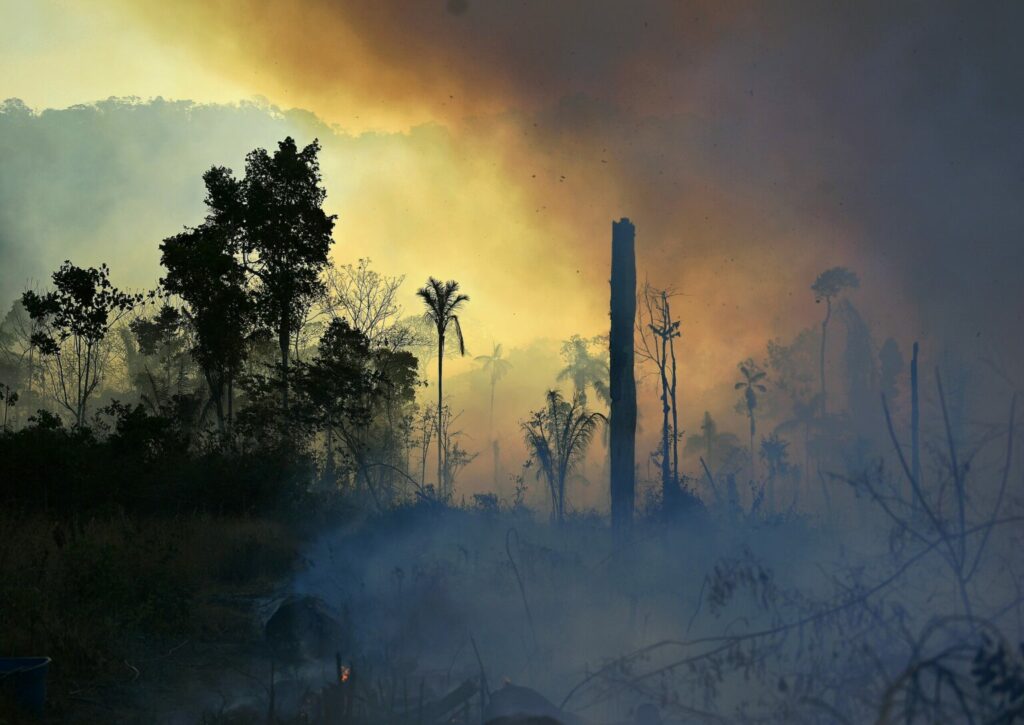 1 Sep 2021 – As industrial agriculture, mining and logging have barreled across the Amazon rainforest in recent decades, fires and deforestation have dramatically reduced the habitat of tens of thousands of plant and animal species, damaging not just the rainforest’s ability to act as a climate stabilizer but its role as the world’s greatest reservoir of biodiversity.

In a study published today in the journal Nature, a large collaboration of researchers from the United States and China found that up to 85 percent of species listed as threatened by the International Union for the Conservation of Nature have lost habitat because of fires and deforestation since 2001. Overall, fires have damaged the habitat of as many as two-thirds of the species in the Amazon basin.

“The Amazon ecosystem is not adapted to fires, but deforestation and fires have been and are still continuously impacting the Amazonia biodiversity,” said Xiao Feng, a geographer with Florida State University and one of the paper’s lead authors. “Literature suggests a tipping point that when the Amazon loses a certain portion of the forest, the whole ecosystem will transition to another type. If this happens, it will be a tragedy for the Amazon, and for the global ecosystem given the important role the Amazon plays.”

Feng and her colleagues looked at fire data collected from satellites and then mapped that data onto the ranges of thousands of species—a remarkable accomplishment, given the sheer numbers of plants and animals in the region. The Amazon is home to 10 percent of the planet’s known species.

“The Brazilian Amazon is absolutely massive. There are so many species it’s hard to model,” said Thomas Gillespie, a geography professor at the University of California, Los Angeles, who wrote a companion piece to the study, also published Wednesday.

Yet the study’s authors, Gillespie wrote, were able to “develop the most comprehensive collection of range maps available so far of Amazonian plant and vertebrate species.”

The authors of the study then go a step further by comparing the habitat damaged by fires and deforestation to environmental policies in place at the time. They found that, from the early 2000s to 2008, deforestation rates began to rise. But then rates began to slow from 2009 to 2018, when the government removed incentives to burn forest for soy and cattle, created more protected areas and began to better police environmental policies.

In 2019, shortly after Brazilian President Jair Bolsonaro took office, rates again began to rise. In Brazil, home to the largest swath of the Amazon basin, “policies that were initiated in the mid-2000s corresponded to reduced rates of burning,” the authors wrote. “However, relaxed enforcement of these policies in 2019 has seemingly begun to reverse this trend.”

Nearly 4,000 square miles of forest have been damaged since 2019, the authors noted, “leading to some of the most severe potential impacts on biodiversity since 2009.”

The study comes as the Bolsonaro administration and its allies in the Brazilian legislature push a handful of laws aimed at reducing protection for the Amazon and for Indigenous peoples. Last week, thousands of protesters from Indigenous and environmental advocacy groups marched in the streets of Brasilia, the country’s capital, demanding that Brazil’s Supreme Court uphold a land claim by the Xokleng people. Bolsonaro and the country’s powerful agricultural lobby have argued that Indigenous claims on land should be rejected if the Indigenous group did not inhabit that land prior to the 1988 enactment of the country’s constitution.

Under the Bolsonaro administration, mining, logging and industrial agriculture operations have been given carte blanche to make inroads into the Amazon. Incursions into Indigenous lands have risen since Bolsonaro was elected, largely on the promise of opening up the Amazon for business.

“There are many attempts to weaken the environmental policies and those related to the Indigenous peoples rights,” said Nurit Bensusan, a biologist with Socioambiental, a Brazilian environmental and Indigenous rights advocacy group. “Indigenous lands are about 23 percent of the Brazilian Amazon, and those are the most well-conserved areas. But since the beginning of Bolsonaro’s government, those lands have been invaded and destroyed.”

Evidence is mounting that much of that business is illegal. In another study, published last week, researchers from the Federal University of Minas Gerais (UFMG), in collaboration with Brazilian federal prosecutors, found that illegal gold mining is soaring and that it has caused the deforestation of nearly 52,000 acres of the Brazilian Amazon.

“There’s so much illegality in the gold supply chain,” said Raoni Rajão, an associate professor at UFMG and one of the report’s authors. “Bolsonaro was a wildcat miner, and he has this perception that wildcat miners are entrepreneurs and heroes.”

Bensusan said the Nature study’s findings were not surprising, given the rise in forest destruction under Bolsonaro.

“The article’s conclusions offer another proof that forest policy regulations are related to biodiversity conservation, because it is clearer each day that fire, deforestation, forest degradation and drought are destroying species and ecosystems,” she said. “Since Bolsonaro took office in 2019, the situation is getting worse.”

Georgina Gustin covers agriculture for Inside Climate News, and has her work has won numerous awards, including the John B. Oakes Award for Distinguished Environmental Journalism and the Glenn Cunningham Agricultural Journalist of the Year. She has worked as a reporter for The Day in New London, Conn., the St. Louis Post-Dispatch and CQ Roll Call, and her stories have appeared in The New York Times, Washington Post and National Geographic’s The Plate, among others.