31 Aug 2021 – Over the weekend [28 Aug], the New York Times published an editorial entitled “Repression Without Borders,” which presented China as the world’s leading purveyor of “transnational repression.”

There is one source quoted in the 1,500-word editorial, a report by Freedom House, an organization the Times says nothing about. Based on this report, the editorial concludes:

The worst offender, Freedom House reported, is China. “China conducts the most sophisticated, global and comprehensive campaign of transnational repression in the world,” the report said, describing how Beijing marshals its technological prowess, geopolitical clout and vast security apparatus to hound not only the many Chinese people living abroad but also entire ethnic and religious groups, such as Uyghurs, Tibetans and followers of Falun Gong. “The sheer breadth and global scale of the campaign is unparalleled,” Freedom House declared.

If the Times followed the most basic rules of journalism, it would explain what “Freedom House” is, its pedigree and reliability, and whether it has any conflicts of interest. It would write a paragraph along the following lines:

Freedom House receives 90 percent of its funding from the US government. Its current chairman is Michael Chertoff, who served as US Secretary of Homeland Security under President George W. Bush, and co-authored the USA Patriot Act, which justified mass illegal surveillance, torture, and the assassination of American citizens. Chertoff has been accused of war crimes.

But no such information appears, because the editorial is deliberately misleading. The problem for the Times editorial board is that, whatever the US accuses China of doing, the US has done on an incomparably greater scale.

Worse, the man under whose imprimatur the report was published was a leading architect of the most sweeping acts of domestic repression and criminality in American history. If the Times were the slightest bit serious about opposing “transnational repression,” it would demand the immediate arrest of Michael Chertoff.

As head of the Justice Department’s criminal division in 2002-2003, Chertoff was directly involved in planning and implementing the Central Intelligence Agency’s torture program. 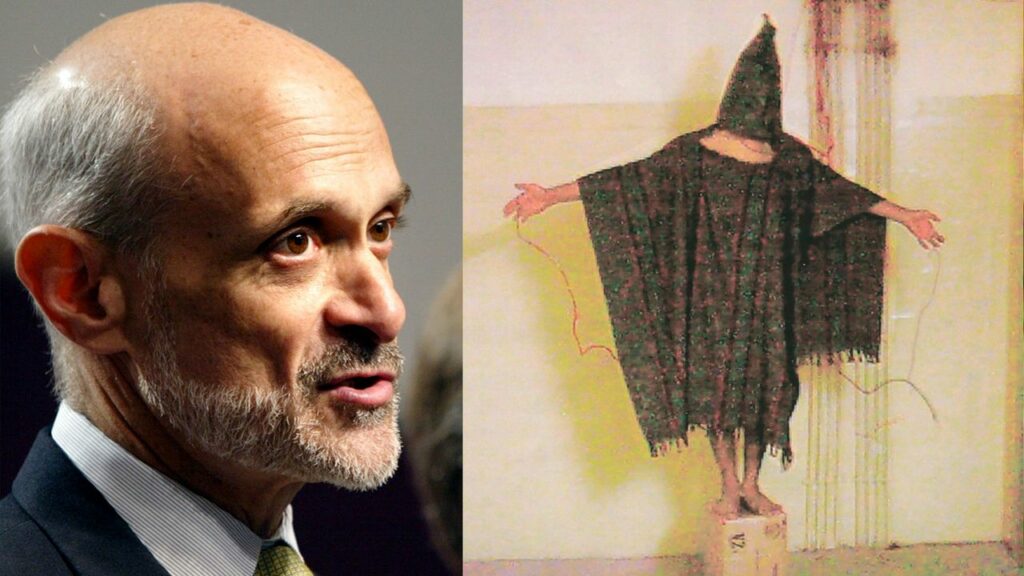 Michael Chertoff (left); Prisoner connected to dummy electrical wires under threat that stepping down from the box would cause his electrocution (right).

According to an article published by the Times in 2005, Chertoff “advised the Central Intelligence Agency on the legality of coercive interrogation methods,” telling them torture “could be legal.”

With Chertoff’s blessing, the CIA abducted and tortured people around the globe, sexually assaulted and grievously beat men, women, and children for months and years, in some cases to the point of death. According to a report by the Open Society’s Justice Initiative, the CIA illegally detained and tortured 136 individuals, with the complicity of “as many as 54 foreign governments.”

Following the terrorist attacks of September 11, 2001, the U.S. Central Intelligence Agency (CIA) commenced a secret detention program under which suspected terrorists were held in CIA prisons, also known as “black sites,” outside the United States, where they were subjected to “enhanced interrogation techniques” that involved torture and other abuse. At about the same time, the CIA gained expansive authority to engage in “extraordinary rendition,” defined here as the transfer— without legal process—of a detainee to the custody of a foreign government for purposes of detention and interrogation.

Today, more than a decade after September 11, there is no doubt that high-ranking Bush administration officials bear responsibility for authorizing human rights violations associated with secret detention and extraordinary rendition, and the impunity that they have enjoyed to date remains a matter of significant concern.

The CIA’s treatment of the wrongly-accused German national Khaled El-Masri is just one example of the crimes that Chertoff helped perpetrate.

The CIA stripped, hooded, shackled, and sodomized El-Masri with a suppository as Macedonian officials stood by at the airport. The CIA then drugged him and flew him to Kabul to be locked up in a secret CIA prison known as the “Salt Pit,” where he was slammed into walls, kicked, beaten, and subjected to other forms of abuse.

Hersh, horrified by what he had seen, described women being forced to witness the rape of their male children, in footage that has to this date never been released. “Those women who were arrested with young boys, children in cases that have been recorded. The boys were sodomized with the cameras rolling. And the worst above all of that is the soundtrack of the boys shrieking that your government has. They are in total terror.”

It is difficult for many people to understand the degree to which the American media functions as a conduit for state propaganda, with all other considerations taking a back seat.

But the publication of an editorial like this, with its jaw-dropping omissions and contradictions, is impossible outside of the exclusive aim of state propaganda: the manipulation of public sentiment to demonize an entire country and create the constituency for economic and military conflict.

The people who staff the Times editorial board are shameless as a professional obligation. They do not see lying as moral or immoral, they see it as part of their job, as an element of tradecraft. They have fully imbibed the mantra of the US intelligence services, once inscribed on baseball caps sent to the Nicaraguan Contras: “Admit Nothing – Deny Everything – Make Counter-Accusations.”

In reality, the logic is reversed. The aim is to demonize China, and the means—alleged violations of democratic rights—is concocted to justify this aim.

The Freedom House report calls for countries to “Deploy a robust strategy for the use of targeted sanctions against perpetrators of transnational repression and those facilitating such acts.”

Freedom House then writes the following passage, which is totally ignored in the New York Times article:

Looming over the issue of transnational repression are the US government’s renditions and targeted killings as part of the “global war on terror” that followed the September 11, 2001, terrorist attacks, and the Israeli government’s extensive use of targeted killings outside its territory. All over the world, states engaged in transnational repression apply the label of terrorism to exiles whom they pursue, in some cases overtly citing the examples of the United States and Israel.

If Freedom House calls for “targeted sanctions against perpetrators of transnational repression,” and the world’s leading practitioner of “renditions and targeted killings” is the United States, should the US be sanctioned? Is Freedom House calling for its own chairman to be hauled off in handcuffs before the international criminal court?

Of course not. Because the point isn’t to oppose violations of democratic rights. The point is to demonize a whole country, paper over the crimes of American imperialism, and create a constituency for war.

An entire book could be written on all the crimes omitted or distorted in the New York Times’ editorial. It says nothing about Julian Assange, the world’s leading political prisoner, who is hounded and persecuted by the US government for exposing its crimes. It is silent on Washington’s mass warrantless surveillance program. It vastly downplays the US drone murders. It presents the US as a hapless bystander to the murder of journalist Jamal Khashoggi, when in fact Washington likely had advanced knowledge of the plot to kill him.

But it is enough to recall the role of Michael Chertoff in the systematic rape and torture of countless men, women, and children to prove that everyone who had a hand in writing this editorial is a shameless liar.

Note: This article intentionally excludes explicit photos of torture and sexual violence perpetrated by US forces in order to comply with Twitter and Facebook policies. Readers who wish to view images we would have included may do so on Wikimedia Commons. Extreme discretion is advised.