Praise Be to Those Who Refused to Kill

Two 2021 books take a fresh look at the unheralded heroes of the Vietnam War.

7 Sep 2021 – It would have been good to have books like these in our hands a half-century ago, when the defeat of the United States in Vietnam had become clear, and the political right (but also the center, hawkish Republicans and Democrats alike) branded peaceniks as traitors to the troops and the nation. That the troops themselves had turned against the war was the best— or, rather, worst—kept secret of the day. 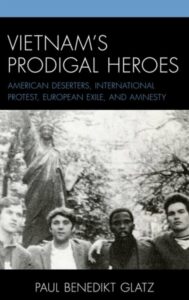 Potential draftees, including this reviewer, had three obvious choices: accept induction; refuse and be threatened with prison; or go abroad, most likely to Canada. Those who found themselves in an impossible situation and needed to flee from the military most often received help in parts of Europe, where the war was highly unpopular. But another category existed: prisoners of war in Vietnam who realized that the war was plainly wrong, and wanted to make their realization known in the media, whether they dared to do so or not.

This last category is especially fascinating, no doubt because the right has created flags and posters, pseudo-patriotic events, political campaigns, and much else in the name of the issue of POWs and MIAs. The orchestrated heroic status of the late Senator John McCain epitomized this cause. Even critics of the war, at least within Congress, felt compelled to call McCain a “national hero,” when some of his fellow military companions were more likely to think of him as a “hot dog” and showboat craving thrills and rewards against the logic of safety.

Jerry Lembke, who co-wrote Dissenting POWs with Tom Wilbur, is well-known for debunking the myth of the “spitting protesters” greeting returning GIs in airports or other public places with phlegm-filled contempt. These events never took place, and could not be documented. Wilbur, his collaborator, is the son of a POW, who has worked as a scholar and an NGO staffer in Vietnam.

The authors note that the story of anti-war POWs has been largely, if not entirely, overlooked. Some of the dramatic and comically undramatic episodes include a failed U.S. raid on the Son Tây in North Vietnam. Like the imagined success, the imagined heroes there, like John McCain, were heavily mythologized.

Interestingly, as the war went on and campus or community protests heightened, captured pilots and others were more likely to have long hair and sympathy for the peaceniks (i.e., they doubted their assignments). Visits of leftwing and liberal U.S. delegates to Vietnam heightened the sense of disbelief. But so did the medical care to the prisoners—when it became known—which was excellent by the standards of what could be done in the circumstances.

“If a third to a half of the POWs were disillusioned with the war by 1971,” the authors say, then official explanations—widely seen in the media—had to ascribe changed attitudes to “brain washing,” a term first publicized during the Korean War. Actually, the war between officers and enlisted men had overwhelmed the conflict between the prisoners and their keepers, according to many accounts.

Much of the book examines a handful of these disillusioned men carefully, one by one, as the Pentagon tried to shut them up in one way or another. The military brass’s cravings for court martials fell apart because they would inspire the wrong kind of publicity. In the end, those who spoke from their conscience had a noble and notable role in history.

Amnesia set in, with Hollywood almost fully aboard. What the authors call “POW-rescue and MIA-recovery” films like the Rambo series, were spun from whole cloth, the same cloth as the notorious POW-MIA flag and the heavy merchandising of various other money making projects. At the end of the book, the authors cite such heroic figures as Ann Wright and Pat Tilman as successors to the brave dissenters, raising objections openly from the experience of their own military lives.

Vietnam’s Prodigal Heroes covers a lot of space, from the first appearance of deserters to their long-awaited vindication. It is, like Dissenting POWs, a book of memory, both lost and restored. 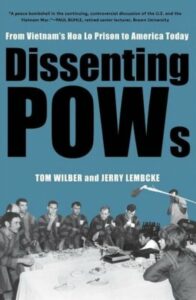 It is unusual for its close examination of the European press, where the State Department propaganda machine weakened and nearly broke down under the reality of desertion. At least a half-million cases of “unauthorized absences” were recorded, and by 1971, a rate of 73.5 “absences” per thousand soldiers hinted at the mass disillusionment in the ranks.

Compared to the Korean War, which was actually unpopular but in the midst of the Cold War unresisted by draftees, the “deserter phenomenon” arose against the background of the civil rights movement’s challenges to racism, the new popular culture of permissiveness and peaceniks, and above all the sheer unpopularity of the U.S. invasion of Vietnam.

It is downright exciting to read about the sanctuary that was afforded to soldiers in France and Sweden, likewise the organizing work of French activists and Americans abroad to encourage them and others, with everything from information to housing. Elsewhere, as in Germany, popular opposition to the U.S. effort also became a major strategy of the left, pushing back against the NATO-loyalty of the mainstream political parties. The “Intrepid Four,” deserters who showed up in the Soviet Union made headlines, often in the form of attack headlines from The New York Times and other U.S. outlets seeking to discredit them.

The role of the deserter naturally grew along with the unpopularity of the war. The State Department and the CIA concocted ways to undermine the security of deserters and draft resisters. Frantic attempts were made to divide them into “confused” and “disloyal” categories. Legal support activists in the United States sought to help, and new groups were formed like the National Black Antiwar Antidraft Union. On the European political front, the Swedish Social Democrats swept to an election victory thanks very much to the young voters drawn to the party’s antiwar stance.

“Deserter Activism” rattled U.S. officials who sought to use every means of retribution. On the other hand, the deserters themselves found it hard to adjust to life in exile, especially in those years when English was not so readily spoken by the natives. New helping institutions including the American Exile Project sought to fill the gap, and in the long run helped to lay the basis for a reconciliation of sorts, allowing most Americans to return home without threat of arrest.

In the end, the Amnesty Project found a way forward. Eugene McCarthy and George McGovern had given amnesty their blessings, but Hubert Humphrey faithfully represented the liberal mainstream in rejecting this solution. Gerald Ford’s pardon of President Nixon may have turned the tide of public opinion, or perhaps it was the passage of time that brought Jimmy Carter to issue the blanket pardon.

This pardon unfortunately denied veterans benefits to offenders aka deserters, limiting their opportunities in many ways. By focusing on a distinction between draft offenders (who received the full pardon) and military offenders (who did not), Carter reinforced the class and color lines that had always been at the heart of the Cold War.

This last element makes for an unhappy ending to a story that involves not only great personal courage, but also the dedicated work of thousands of peace activists.