We Need Open and Honest Discussion about the Pros and Cons of Vaccine Mandates, Not the Hysterical Shouting Match We Have Now 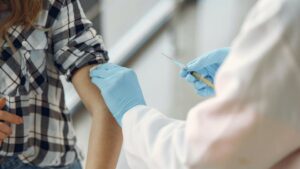 6 Sep 2021 – Vaccines are a medical miracle. Vaccine mandates are also a massive infringement on personal choice. We need a proper and public cost benefit analysis to work out the best way forward; instead, we just have tribal yelling.

Vaccines are one of the greatest scientific inventions in history, and without them we would be living in a different world.

Inoculations have been at the forefront of stopping the spread of deadly diseases throughout recent history. Polio, which leaves people with paralysis, stunted growth, decaying limbs, and life-threatening disabilities, is now a thing of the past in most countries. Without vaccines, scientists could not have developed a successful polio eradication initiative and, since its launch, the annual number of wild poliovirus cases has declined by more than 99.9% worldwide.

In 2021, polio has been eliminated in most of the world for more than 30 years, and this could not be possible without groundbreaking medicine and vaccines. However, in Pakistan and Afghanistan polio is still classified as endemic. Pakistan, in particular, has been named by the Global Polio Eradication Initiative as the only country in the world with consistent barriers preventing vaccination.

In fact, a large proportion of the general population in Pakistan and Afghanistan have a distrust of vaccinations against polio. Many of the reasons are rooted in senseless conspiracy theories. According to reports, some Afghans literally believe that polio vaccines contain questionable ingredients and are used in order to spy on them.

As a doctor, here’s my message to anyone who thinks it’s OK to deny medical treatment to those unvaccinated against Covid

In Pakistan, religious extremism and indoctrination have been cited by the Global Polio Eradication initiative as barriers preventing vaccination.

If all of this seems familiar, it’s because we are witnessing a similar phenomenon with the distrust against coronavirus vaccines by anti-vaxxers who are spreading conspiracy theories, such as the jab being ‘experimental’, and that the vaccines are a ploy to connect people to 5G networks.

Contrary to the lunatic quackery of anti-vaxxers, I’m double vaccinated, as are many of my family and friends. When asked about my opinion on vaccines, I encourage others to get the jab as, after looking at the history, I believe in the efficacy of vaccines.

However, my choice is entirely mine, and the choices of others are theirs alone.

Some people refuse to get vaccinated for understandable reasons, such as medical conditions, or because they perceive the jab to infringe on their bodily autonomy.

But the debate around vaccines is now becoming extremely polarised, with the UK introducing vaccine mandates for nightclubs and bars, setting a concerning precedent. And, across the pond, the American Civil Liberties Union has said, “In fact, far from compromising civil liberties, vaccine mandates actually further civil liberties.”

That statement understandably sent waves through social media, as suggesting that the state forcing citizens to inject their bodies with a medicine they don’t want is a win for civil liberties appears, at the very least, a little incongruous.

We now have an uncertain future; how do we protect our freedoms and civil liberties in order to overcome this pandemic?

We know that vaccines are good – even though they don’t prevent the spread of Covid-19, they make the odds of serious hospitalisation or death very low. London-based Public Health England reported that the Pfizer-BioNTech and Oxford-AstraZeneca vaccines are both 85-90% effective in preventing symptomatic disease after two doses.

However, vaccine mandates are indeed a slippery slope and many, including myself, have been struggling to get our heads around the central question of whether this pandemic is a circumstance where we should allow our civil liberties to be overridden to such an extent.

When analyzed from a humanitarian perspective, it could be argued vaccine mandates are needed to let people return back to normal life, and they save lives. On the other hand, have we ever before in history advocated for mass medical intervention for entire populations at this scale? How will this affect the way the state relates to the personal choices of its citizens in the future? Once this Rubicon is crossed, can we ever row back to the other side?

As a society, we do not know the consequences of this choice being taken out of the hands of its citizens. These are all important questions which are not yet addressed. Nor do we have answers as to why the drive to get people vaccinated is becoming so coercive.

It could be that this coercion will only further entrench the beliefs of people already skeptical of the vaccine; it could even spark more skepticism among those on the fence. These are psychological consequences of the pandemic which are still not being discussed.

Furthermore, if there is a group of people who are refusing the vaccine based on misinformation, it should be asked why our bureaucracy has become so inefficient that it is unable to win public trust in unvaccinated groups.

During the polio outbreak, according to historic reports, there was enough trust in most governments, therefore vaccines by coercion or force did not happen. In many countries during the polio outbreak, attitudes towards vaccines were positive, as polio left people devastated worldwide before the vaccine became available. Everyone knew someone who had been crippled by polio, and people understood that vaccinations were needed to protect people.

Currently, the debate over vaccines goes against the culture of what our traditional society once was. With increasing coercion to get the vaccine, resistance to the jabs is only getting more intense. This is a backlash against a value system which fails to answer important questions about the balance between public health and civil liberties.

WATCH tens of thousands march against vaccine passports in Amsterdam

Stories such as the polio outbreak should speak to us with lessons to learn from both sides of the spectrum. Those who are pro- or anti-vaccine should look to disasters of the past to answer the dilemmas of this current public health crisis.

Covid is never going away, and as the debate is only becoming more polarised, dividing family, friends, and society at large, it is high time that an ethical analysis of mandatory vaccinations and vaccine passports should be freely discussed in public.

Open and fair discussion could prove useful in shaping public policy, whilst also winning public support from both sides of the debate.

Ramsha Afridi is a writer and a journalist based in the UK, she has written for publications such as the Telegraph and the Daily Express amongst others.