Whitewashed: Canada Is Shackled by Its History of Denial 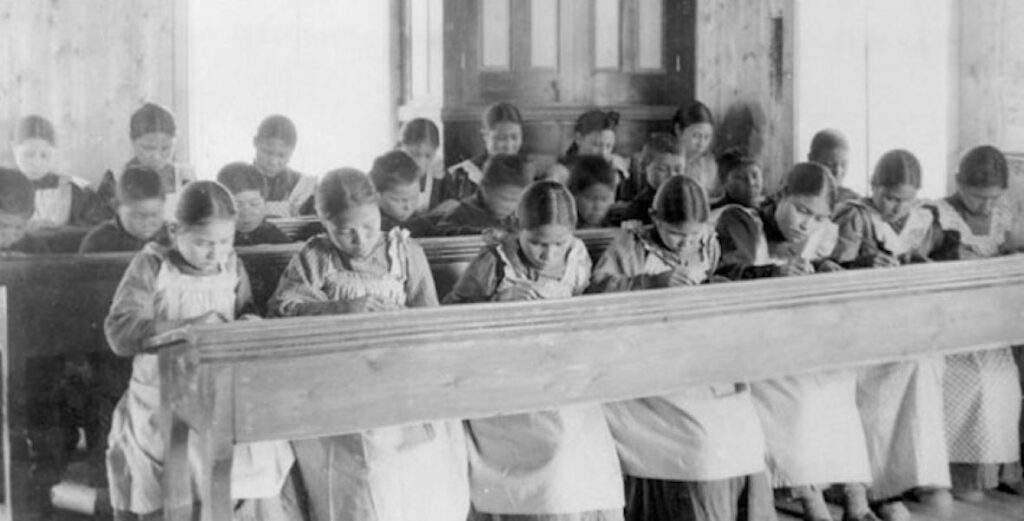 Content warning: The content of this story is potentially triggering for survivors of residential schools and family members. The Indian Residential School Survivor Society runs a 24 crisis line for anyone experiencing pain or distress as a result of their residential school experience. You can reach the line at 1-866-925-4419.
Image: Library Archives/Flickr

When colonizers write history, their greatest device is their control over what to leave out, undermine, or alter. Thus, generations of Canadians have not learned what was deliberately left out of their history and know very little about what European explorers did to the indigenous peoples who first lived on this land.

School children in Canada learn about its founding from a colonial perspective. They are taught that 36 white men, known as the Fathers of Confederation, mostly lawyers and businessmen — white supremacists — founded and wrote a constitution, and enshrined the birth of a nation into law, under which we continue to live. The history of the residential schools and the collusion between the state and the Roman Catholic Church in their joint attempt to exterminate “the Indian in the child” has, for the vast majority of Canadian students, been omitted from their education.

Canadian schoolchildren do not learn that Indigenous peoples were deliberately targeted to be wiped out via various methods, including infecting blankets with smallpox, forced sterilizations of Indigenous women, and the ongoing separation of children from their families, communities, and homes.

Our schoolchildren do not learn about the intentional deprivation and the underfunding of essential amenities such as housing, clean water, sewers and sanitation for Indigenous communities that sits in stark contrast to the quality of public services other Canadians receive.

They are not taught about the relocation of Indigenous communities from resource rich areas to swamplands and confinement to reserves where the law once prevented them from leaving, nor do they learn about how treaties were designed to benefit the colonizers.

Our schoolchildren do not learn about the assimilatory and racist Indian Act, a registry intended to perpetually reduce the number of “status Indians” so as to further diminish Indigenous communities. They are not told about the racist and sexist policy of denying status to children of Indigenous women who married non-Indigenous men.

Residential schools had a clearly stated purpose: destroy language, culture, traditions, and ways of life; to “kill the Indian in the child.” They did this through forced conversion, assimilation and extermination to eradicate Indigenous cultures, communities and lives in Canada. Whereas other countries’ constitutions necessitate the separation of church and state, ours does not. The Canadian government and the Roman Catholic Church colluded in the history of the residential schools.

If schoolchildren were taught the hidden history, they would have learned that the actions of the Canadian government constituted genocide, as defined by the United Nation’s 1948 Convention on the Prevention and Punishment of the Crime of Genocide, passed after the Holocaust. This convention stipulates that genocide is a crime under international law, whether committed during a time of peace or war. The convention defines genocide as act(s) committed with the intent to destroy, in whole or in part, a national, ethnic, racial, or religious group. While the definition does not require that the entire group be eliminated, the discovery of more than 1000 unmarked graves of children, some as young as three years old, makes it evident that elimination was the intent. To add to this, Indigenous women and girls continue to go missing and be murdered at disproportionate rates; the police and RCMP continue to enact undue violence upon Indigenous people; and systemic, legal and economic racism continues to run deep.

Countries built by colonization readily acknowledge atrocities and genocides in other countries such as Cambodia, Rwanda, or Bosnia, to name a few. The Holocaust is acknowledged in mainstream history within Germany and around the world. Yet, the world’s most powerful nations are slow to acknowledge politically inconvenient genocides, such as in Armenia.

Canada continues to rewrite its history by suppressing information while speaking of truth and reconciliation, and reading land-acknowledgments while dismissing the continued crimes against humanity committed against Indigenous peoples, and fighting survivors in court.

Canadian identity is inherently shackled to its ongoing denial of its own history of violent white supremacy.

Anything short of an uncompromising apology by the Pope is nothing but a cover up and continued complicity. Anything short of prosecution of all living collaborators of the residential school system for their inhumane crimes, regardless of their age, is an abdication of duty by the government. Anything less than a multi-billion-dollar fund from the church towards reconciliation, restoration, and revitalization of Indigenous languages and cultures, is a sin.

Indigenous people have a right to overcome the intergenerational trauma inflicted upon them by settlers. The children of Canada and the population at large have the right to know the truth.

Summer Mahmud is a recent graduate of McGill University’s department of English, drama and theatre studies.