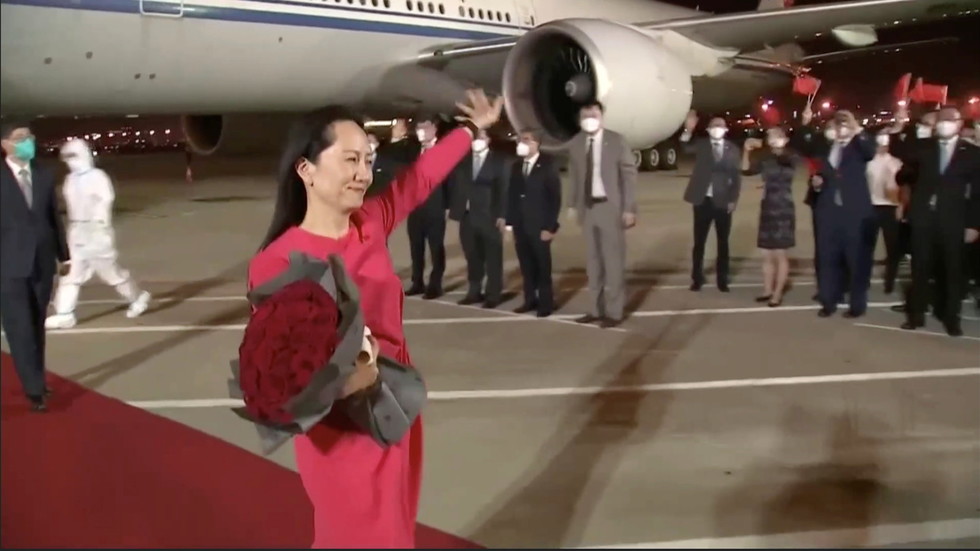 27 Sep 2021 – Big crowds greeted Huawei senior executive Meng Wanzhou’s arrival back in China, which believes its show of strength against the USA forced Washington to back down in this three-year standoff.

The biggest story of the weekend saw Meng released from house detention in Canada and returned to China, while Beijing subsequently released two Canadian prisoners it had accused of spying. The development brought an end to a horrific three-year saga for all involved.

On arrival in Shenzhen, Meng, the company’s chief financial officer, was greeted with a hero’s welcome, including thousands who gathered at the airport to meet her, while millions watched it online amid a chorus of euphoria from Chinese media.

Huawei or the West’s way: Which kind of spying comes with your phone?

The West quickly spun this euphoric reception as a state propaganda effort, but this completely misses the point and deliberately takes it out of context. Meng’s glorification into quasi-hero status was not something superficial, but tapped into a sentiment that saw her release as a political and diplomatic win for China, a show of resolve and national strength and a break from the “legacy of humiliation” which the country has suffered in the past.

This is especially important in light of the Trump administration’s bid to try and humiliate Huawei and China by seizing her in the first place, an aspect not a single Western mainstream media outlet discussed. This makes it an important psychological victory in Beijing’s favour, even if it does subtly admit the counter-detention of two Canadians had political motivations, which critics have branded “hostage diplomacy.”

The political identity of the People’s Republic of China (PRC) is built upon the dual premise of humiliation and revival. Contemporary Chinese history is narrated in the decline of the Confucian Empire, which was subjugated and “humiliated” by European colonial empires, who forced open its markets, pushed unequal treaties on it and seized territories such as Hong Kong. The political forces unleashed by the deterioration of the Qing Dynasty in the midst of this upheaval fermented a political and ideological shift within China, and led to soul-searching for new ways of thought, in the dream that the country’s glory could one day be restored again as a modern and powerful nation.

This sentiment peaked following the 1919 Treaty of Versailles, when German-held land in Shandong was not returned to China, but given to Japan. The collective outrage this spurned created the “May 4th movement” and soon the Communist Party of China, which saw its revolutionary ideology as instrumental to modernizing and pulling China out of its poverty and backwardness.

Hence when Mao declared the PRC in October 1949, he is popularly attributed to having said, “The Chinese people have stood up” – and it was the hope of the new state that the misery of the past would never be repeated. Whilst Western ideological thinking popularly likes to claim that China’s communist party has no true legitimacy, in reality the party finds its power through how it has bound itself to revivalist Chinese nationalism, which President Xi Jinping has described as “the rejuvenation of the great Chinese nation”.

With China’s recent rise, there have inevitably come attempts by the West to humiliate and politically dominate it again like in times of old. The Meng Wanzhou saga is a perfect symbolism of this. In 2018, the Trump administration unleashed an all-embracing campaign to destroy the highly successful Chinese technology firm, Huawei. This involved forcing other countries to blacklist it from their 5G networks, weaponizing supply chains against it to cut off the export of key components to it, and the pursuit of politicized charges to persecute one of its senior executives, the founder’s daughter, Meng.

The mainstream media have painted the Meng situation negatively in light of China’s retaliatory “hostage diplomacy,” but have declined to mention that her arrest was political in nature, involving the alleged violation of US unilateral sanctions against Iran (which are illegitimate themselves), and not least that Donald Trump himself hinted she was a bargaining chip (this seems to be conveniently forgotten).

Because of this, and also considering Trump’s broader effort against China including the trade war, the Meng saga was inevitably understood by China as an attempt by the US to “humiliate” it; to subjugate and break the country like in times of old, by having a leading figure from one of its major companies shamed and tried in a US court on charges which were quite obviously bogus. In complying with this, Canada frequently insisted it was only “abiding the rule of law” in following the US request to extradite her, and to this day refuses to be honest by admitting the US’s bad faith behaviour.

China responded to the situation with the detention of two Canadian businessmen, and it is not unreasonable to describe this as an act of harsh realpolitik. The cold truth is that it allowed Beijing to gain the upper hand against the US and Canada, and eventually secure Meng’s release on its terms. As a result, China sees this as a big win: it conceives this as having overcome an attempt to humiliate the country again, and therefore a display of national resolve. This is why Meng has received such a preferential reception.

It has been weaved by state media into a broader commentary that China has stood up for its own interests and forced the other countries to reason with it. While the political dynamic of this is obvious, it is the West at large which refuses to admit the politicised nature of Meng’s arrest or Trump’s callous campaign against Huawei. However, it was nonetheless forced to come to reason with China’s position. As a result, it may be said that the Canadian prisoner row also reveals the realist and Hobbesian sentiment which drives China’s own foreign policy, which has been constructed from these historical experiences with the West.

Ultimately, China believes that the only answer to a West which does not respect it on equal terms is strength. Just like when the US and its allies sanctioned China in March over Xinjiang, Beijing hit back harder, a move which shocked the West. As a passage in Machiavelli’s ‘The Prince’ says, “It is better to be feared than to be loved, if you cannot be both.”

China believes that in upholding its interests, force is “the only language the West will understand,” not least when the US and its allies believe they have a God-given right to change China in their image. Whilst this creates frequent accusations that China is “aggressive” or “coercive” (even though the US is the real aggressor and does far worse), the message for Beijing is that such shows of strength ultimately work.

Meng has become a symbol of how China has thwarted Anglo America’s actions and humiliated the US and Canada. This is why it has created such a meltdown in the media that so-called “hostage diplomacy” has worked.

It also demonstrates that China is willing to respond to challenges against it with resolve, and that if the USA chooses to take brutal actions against it as Trump’s administration did with Meng, it won’t always end well for them. This is why one woman’s release may be a psychological turning point in US-China tensions.