“Activism” and the Demonization of Political Action 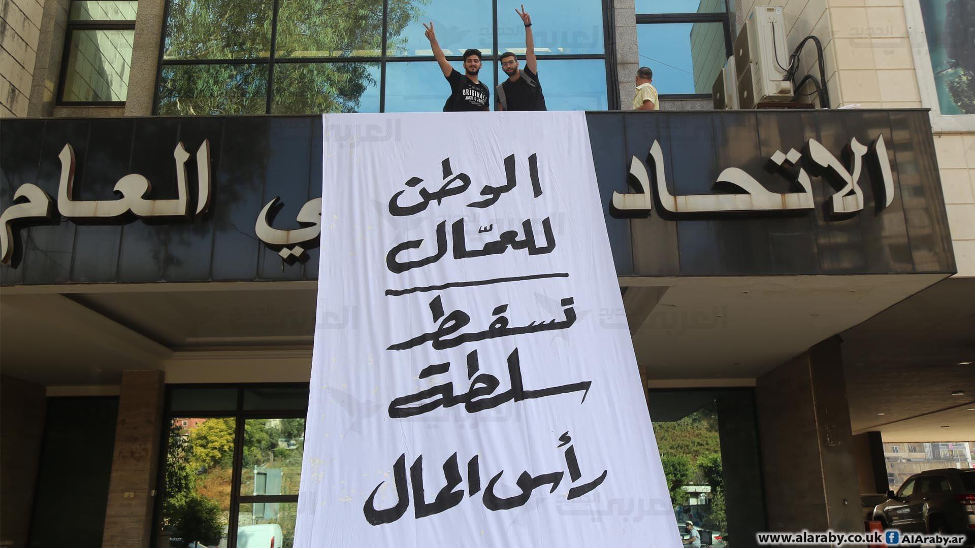 A collective action with an accompanying slogan that “activism” was not able to outpower: “Homeland is for workers, down with the capitalist system.” It was raised by a group organized under “The Youth and Students’ Sector of the Lebanese Communist Party” after they had stormed into the General Confederation of Lebanese Workers to remind it of “its mission and duty of acting as a weapon at the service of the workers.”
(October 2019, Photography by Hussein Beidoun “Al Arabi Al Jadid”)

Fall 2021 – On the occasion of the 100th anniversary of the end of the first world war, I sat in a hall with more than 20 young men and women in the course of a workshop in Germany. The workshop aimed at gathering youth from different countries to come up with proposals “for building peace and resolving conflicts worldwide.” After a series of workshops, the suggestions that the participants came up with were to be sent to the German and French presidents as “proposals to be implemented contributing or leading to world peace.”

The pinnacle of “activism” – white activism in particular – is exported to the ends of the earth. It is embodied in conferences and workshops that lull the youth into believing that their voices are heard and that their opinions are effective when it comes to “peacebuilding,” to the extent that most of the participants go out of these workshops with a sense of self-fulfillment, thinking: We did what we have to do to make the world a better place.

The objective “peacebuilding and resolving conflicts” did not need all those proposals, and it most certainly did not require the solution suggested by a European participant, which was to “strengthen the North Atlantic Treaty Organization (NATO).” What do we need to build world peace? Stopping wars, imperialism, capitalism? Putting an end to colonial and postcolonial policies, and all that has emanated out of the neoliberal system’s hegemony over our societies with their political and economic dictates over poor/weak states? Supporting repressive regimes, multinational companies, and non-governmental organizations are only some features of that hegemonizing dynamic. Nongovernmental organizations predominantly impose their agendas on societies, rooting the voyeuristic donor standpoint on their “clients.”i Most dangerously, their work devises a hegemony of individualistic neoliberal “activism” and poses it as an alternative to collective struggle, making you believe that every time you donate a dollar to a particular charity, you will be actively “changing a child’s life in Africa.”

Lebanon is no exception. The 17th of October 2019 uprising, featured a dominating rhetoric against political action in addition to a prevalence of practices that demonize and scorn politics. For a while, this uprising represented a turning point in political awareness for many; it also enhanced a shallow understanding of revolutionary action that made many repeat the slogan “I am the leader of the revolution.” 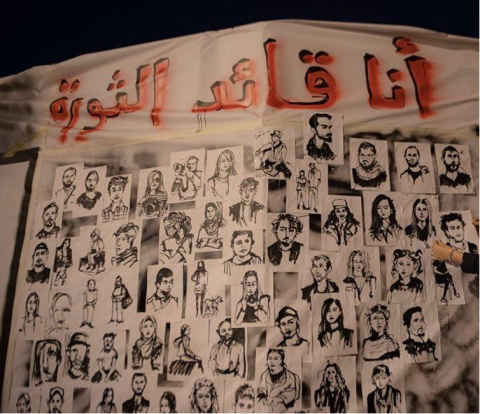 1 In addition to distorting the logic of political action, the demonization of the act of political organization is also at the heart of liberal culture. The individual is displayed as an independent manufacturer of change through charity donation, volunteering, or even through sharing a post on Facebook. Accordingly, the romanticized view towards revolutions and change is enhanced as a simplistic selfish act, as opposed to it being a cumulative, and dedicated collective struggle.

1. A mural reading the slogan “I am the leader of the revolution”. Some were used during the 17th of October movements, with sketches of a group of people who adopt this slogan. (November 2019, Photography by Nabil Ismail)

2 Political action which encompasses negotiation, organization, and leadership was systematically distinguished from the political movement (the uprising itself). A reduced meaning of the political was popularized, invigorating individuals to delegate themselves as representatives of the people. This reductionist distinction generates political slogans void of the jest of organized political action.ii

2. A sign with the slogan “No leadership for the revolution, the people demand – not negotiate” featured in a march in Tripoli. (October 2019, Photography by Ibrahim Chalhoub, “A.F.P”) 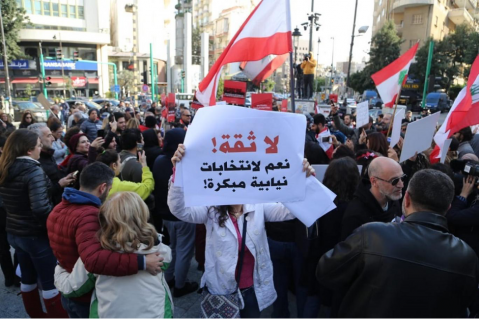 3 Even political demands are tainted with a reformist discourse that regenerates the same system under the illusion of change and the sham of bourgeois democracy.

3. A sign with the slogan “No confidence! Yes to an early parliamentary election.” Featured during a movement in Sassin Square in Achrafieh. (March 2020, National News Agency) 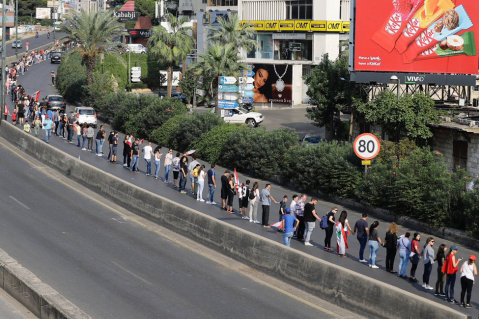 4 Apolitics is accompanied by nonviolence in terms of devising means of opposition – or rather summoning it from the West – and celebrating it as a “civilized image” of the revolution. But who instills the criteria of “civility” and what does that phrase even mean? Isn’t demanding nonviolence in the face of political authority an inescapably losing bet?

4. A segment of “a human chain” that was organized, extending from Lebanon’s north to its south as part of the 17th of October movements (October 2019, from the web) 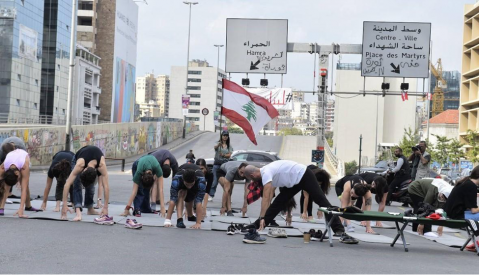 5 Liberal culture puts these practices in the scope of serious efforts toward change, when in fact, they are merely a facade that aims at averting our understanding of the nature and essence of the struggle – as a class struggle. It also provides the people with a false alternative.

5. Peaceful demonstrations through “yoga” training on the Ring bridge in Beirut. (October 2019, from the web) 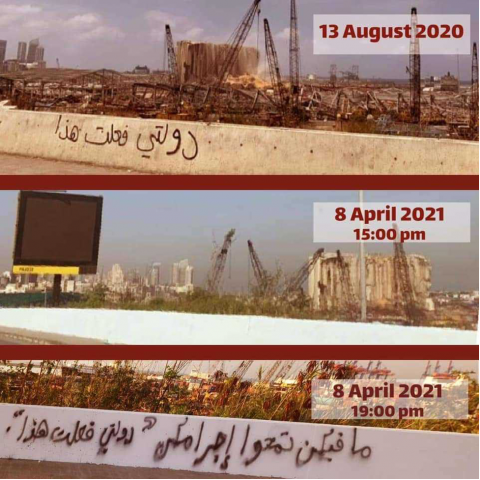 6 In addition, “non-violence” or pacifism intentionally ignores the position of the parties to the conflict, frequently equating between the aggressor and the victim under the alibi of peace. This assumes the victim begging for the aggressor to achieve justice under the pretext of the ultimate goal of peace. Under these terms, peace mostly comes to the aggressor’s benefit and on their terms. The pacifist demands reduce, calculatedly or ignorantly, the nature and essence of the conflict, thus transforming the achievement of justice into a mere individualistic objective.

6. The slogan “My government did this” was written on a wall overlooking Beirut Port after the August 4 explosion 2020. It was later erased with white paint by one member of the “non-violent communication” association as a prelude to an activity called for by the association, where the parents of the victims of the explosion draw on the wall in a manner that doesn’t contradict with the principle of non-violent communication”. (Here is the association member’s clarification, April 2021) 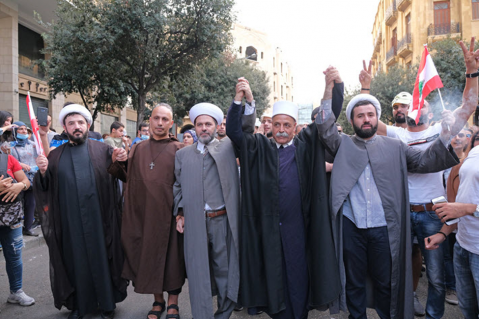 7 In liberal culture everything is possible. It can, for example, reintroduce the sources of repression – the likes of religious authorities – in the context of accomplishments and expressions of pride and celebration. It is similar to instances where men from religious establishments were celebrated as symbols of “coexistence” in what is assumingly called a “revolution.” Because, if an actual revolution had occurred, it would’ve sheared off the religious institution from its roots, as it is a pillar of the repressive patriarchal regime that governs society and guarantees the continuity of the ruling system and all that feeds off of it. 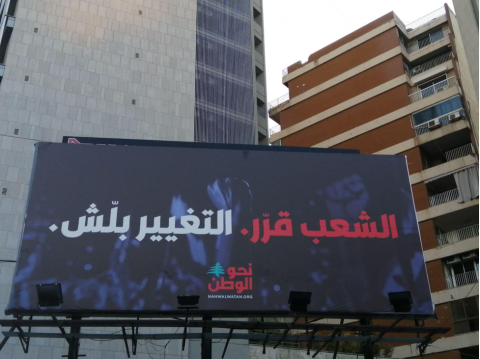 8 Liberal “activism” thrives on selling illusion and ascribes to others’ personal/individual guilt because they didn’t donate a dollar to stop famine or they didn’t revolt or participate in elections to change their realities. The saying “what are they waiting for to revolt?!” propagated all throughout Lebanon, and held the reality of the bourgeoisie. In other words, it was waiting for the working class to revolt on its behalf and accomplish reforms that suit its (bourgeois) class position and further enhance it (i.e more neoliberal policies, such as privatization).

8. A sign with the slogan “the people decide; change has begun” was among a series of other banners in the context of campaigns for the coming parliamentary election of 2022. (October 2021, Photography by Rim Trad) 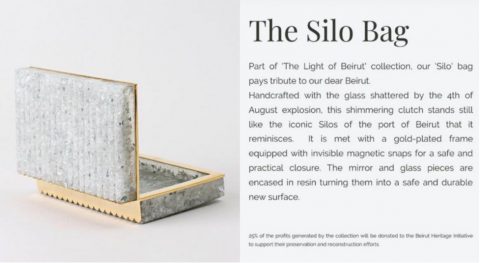 9 This is how capitalism crushes struggles/causes: by transforming them into profit-making commodities, through media, the market, and/or elections. It transforms lived tragedy into a means of accumulation. It maliciously exonerates the aggressor by incriminating and blaming the victim. It is exactly like how liberal environmentalists/vegans act and speak, showcasing climate change as being a result of “human greed” and “increased consumerism” rather than it being the product of the policies of large companies manipulating markets, accumulating profits through exploiting labor, and appropriating natural and animal resources.

9. An advertisement for a handbag among a collection of other bags made from the glass of the Beirut Port explosion. The handbag was later withdrawn from sale after the controversies it sparked. (December 2020) 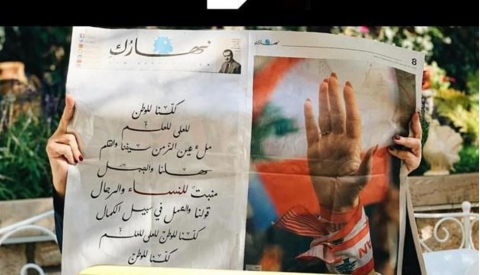 10 One of the most prominent tools of “activism” and non-governmental organizations is the fragmentation of struggles, and dismissing the relation of different issues with the capitalist regime, despite the latter holding the determining factors that shape all other issues arising within its orbit. Women’s rights issues or queer issues or climate issues, to name a few, become independent causes existing in and of themselves, not intersecting with one another, hence rapidly drifting into the path of commodification and the trap of representation without any pursuit towards a real change.

10. The cover of a Lebanese newspaper “Annahar” that published a modified lyric of the Lebanese National Anthem by adding the word “for women” in one of its verses making it “a birthplace for women and men”, as part of a collaborative campaign with a famous advertisement agency “honoring the female contribution in the revolution, life and everyday human experience since the onset of humanity” as described by the newspaper. (October 2019) 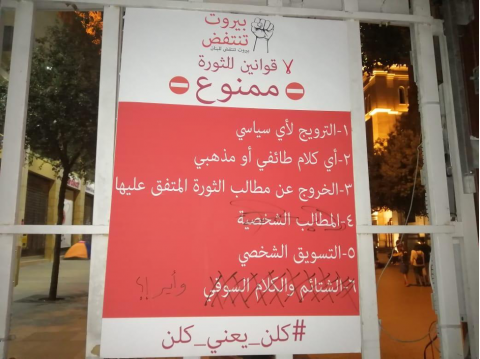 11 Commodifying struggle creates icons like “the revolution grip”iii and forcefully imposes terminology such as “revolution” on movements. It burdens them (movements/struggles) with expectations that surpass their actual capacity for the purpose of pleasing the media, and utilizing it politically and in service of the ego. This is in and of itself one trap of the system’s many traps, that makes us think yet again that “we did what we are supposed to do to make this world a better place.

i. Clients/زبائن meaning the constantly altering strata of state-society which the NGOs and their donors frame and define as beneficiaries, and for whom they then tailor socio-educational, relief, and/or aid projects and programs over varying timeframes through clientelist, reformist, and business/market-based structures (Translation manager).

ii. Taking into consideration the delicate and much important nuance in the introduced political concepts of political work – action – occurrence and the alienating reductionist definition of who is a political actor and what is the action that may be deemed political, necessitated a reinterpretation rather than a translation of the paragraph (Translation manager).

Rim Trad –A graduate of the faculty of media studies at the Lebanese University, Rim worked in written and digital press in Lebanon. She is interested in anti-hegemonic narratives, and feminist and labor issues.