‘Nicaragua Presents a Challenge to the International Left’ (Video)

11 Nov 2021 – With the US leading an international chorus rejecting the legitimacy of Nicaragua’s general elections, the anti-imperialist left ‘is walking a tightrope’ between opposing foreign intervention while still condemning the abuses of the Ortega-Murillo government. 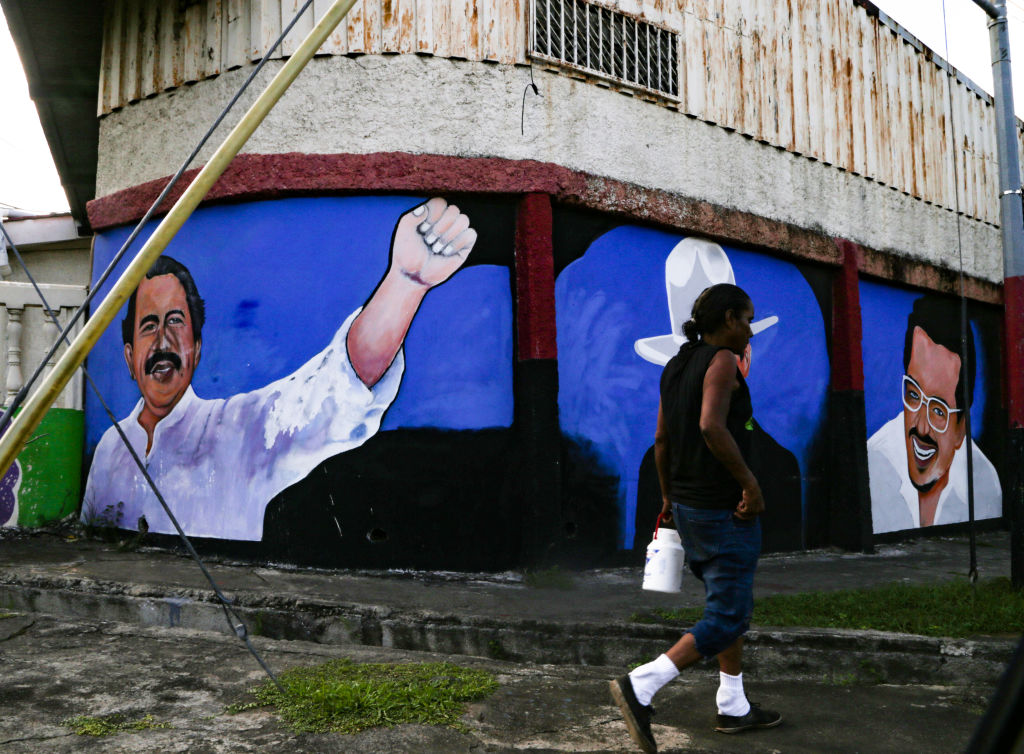 A woman walks past a mural with the image of Daniel Ortega, president of Nicaragua, in Managua, Nicaragua, on 7 Nov 2021. Ortega secured a fourth consecutive presidential term in this week’s general elections, but faces accusations of authoritarianism after arresting opposition members, including seven presidential candidates, in the months before the election.
Photo by Orlando Valenzuela/Getty Images. Americas Quarterly

On 7 Nov, Nicaraguan President Daniel Ortega secured a fourth consecutive term in the country’s latest round of national elections with Rosario Murillo, Ortega’s wife, serving as Vice President. Prior to his current run as President, which began in 2007, Ortega had headed the government throughout the 1980s, first through the Junta of National Reconstruction after the Sandinista National Liberation Front ousted the right-wing Somoza dictatorship in 1979, and then as President from 1985 to 1990. Nicaragua’s electoral authority has said that voter turnout in this week’s elections reached 65% and that Ortega’s Sandinista alliance secured about 75% of votes cast.

The United States is currently leading an international chorus rejecting the legitimacy of the elections and condemning the Ortega-Murillo government, with President Joe Biden threatening action against Nicaragua.

“What Nicaraguan President Daniel Ortega and his wife, Vice President Rosario Murillo, orchestrated today was a pantomime election that was neither free nor fair, and most certainly not democratic,” Biden’s official statement says. The “United States, in close coordination with other members of the international community, will use all diplomatic and economic tools at our disposal to support the people of Nicaragua and hold accountable the Ortega-Murillo government and those that facilitate its abuses.”

The aggressive posture and threats of sanctions (or worse) from President Biden follow a well-worn path of flexed imperialist might, political and even military intervention, and self-serving definitions of democracy that the US has often deployed against left-wing governments throughout Latin America. In response, leftists of different stripes in North America and beyond have denounced President Biden’s threat while also claiming that accusations of rigged elections in Nicaragua or doubts about the leftist bonafides of Ortega’s government are entirely unfounded.

But there is a lot more context that needs to be unpacked here, and doing so from a historically honest and anti-imperialist perspective is vital to understanding the very real political crisis in Nicaragua. In this interview, TRNN Editor-in-Chief Maximillian Alvarez speaks with professor and Latin American specialist William I. Robinson about the deeper historical context surrounding Nicaragua’s elections, the very real political crisis that many are not seeing, and the need for the internationalist left to oppose US imperialism while soberly assessing the abuses of the Ortega-Murillo government.

William I. Robinson is Distinguished Professor of Sociology, Global, and Latin American Studies at the University of California at Santa Barbara. He worked in Managua with the Nicaragua News Agency and the Nicaragua Foreign Ministry in the 1980s and was affiliated faculty with the Central American University in Managua until 2001. Along with authoring a series of analyses of the 2021 Nicaraguan elections for the North American Congress on Latin America, Robinson has authored, co-authored, and edited numerous books, including Global Capitalism and the Crisis of Humanity; David and Goliath: The U.S. War Against Nicaragua; The Global Police State; and A Faustian Bargain: U.S. Intervention in the Nicaraguan Elections and American Foreign Policy in the post-Cold War Era.