Snowden Calls Assange ‘Political Criminal’ Ahead of Extradition Hearing, Where the Pressure Might Now Be on Biden’s Legal Team 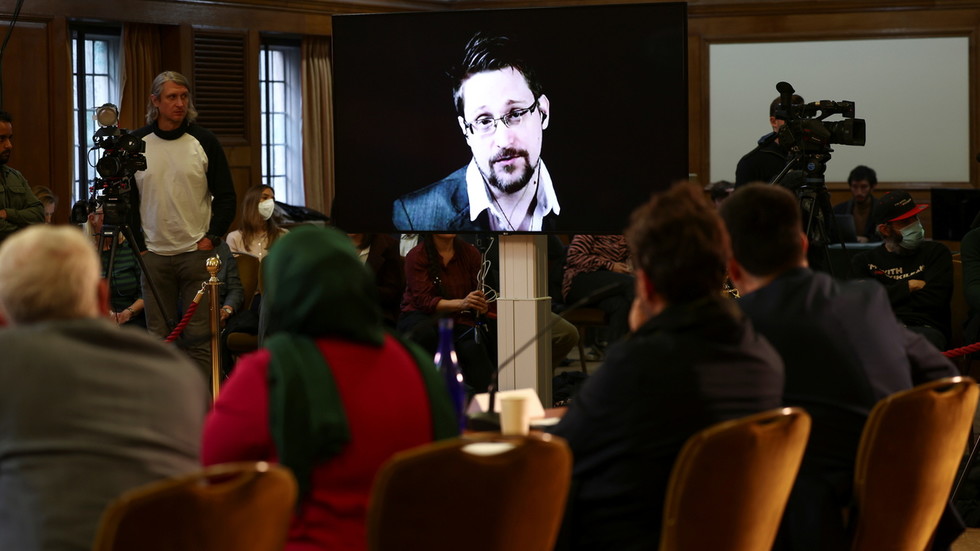 American whistleblower Edward Snowden appears remotely during the ‘The Belmarsh Tribunal’, which is calling for the release of WikiLeaks founder Julian Assange from prison in London, 22 Oct 2021. © Reuters / Henry Nicholls

25 Oct 2021 – Whistleblower Edward Snowden went on the attack against the US and UK and he appealed for the freedom of his pal, WikiLeaks’ Julian Assange, who faces the US’ attempt to overturn a UK court decision to deny his extradition.

Assange has a big week coming up. He should learn this week just how far the US government is prepared to go in its bid to extradite him so they can punish him for revealing secrets they’d rather have kept private.

And while the future is uncertain for the lanky Australian activist still banged up after two years in Belmarsh Prison, the public groundswell is building and might just be enough to make a British judge think twice about sending a man who has devoted his life to uncovering the truth, to almost certain death in a US supermax prison.

Helping raise awareness in the lead-up to that appeal is former US National Security Agency contractor-turned whistleblower Edward Snowden, who launched a strident defence of Assange on Friday at an event in London where speaker after speaker made the case for his freedom.

Snowden, something of a hero in whistleblower circles, fled to Hong Kong in 2013 with a massive trove of classified materials, among which it was revealed that the US government was illegally spying on Americans. WikiLeaks duly published the damning documents.

Speaking in exile from Moscow to the audience of the Belmarsh Tribunal, Snowden said of Assange’s case: “What were are witnessing is a murder that passes without comment.” He said the charges against the Australian had been reduced to “an allegation of journalism in the first degree.”

“I want to say that it is difficult for me to comprehend the spectacle of the press of a nation in the ‘developed’ world aiding and abetting, with full knowledge, a crime not only against this man but against our public interest,” Snowden said. “However, at this moment, we all see this, we all feel it, it’s no less familiar than the shoes on my feet.”

“The charges are absolutely an unadorned legal fiction,” he said.

“We are told to believe that the state has these powers over what can be said and what can’t be said, but what happens if we permit that? Where does that lead? What are we? Can we be said to be free?”

As the views on the streamed event racked up past 2,500, the online audience went crazy in the comments as Snowden spoke – even though ‘Pongo Pigpen’ continued off-piste with a rant about Dr. Fauci. His message was going down so well, people stopped eulogising Jeremy Corbyn’s turn.

“Do we still have that right? Do we have any rights? Today we see someone who has stood up to defend that right who has aggressively championed that right at an extreme cost and it’s time for us to defend his rights.”

It was powerful stuff delivered in a thoughtful, understated way and underscored the comments from Assange’s fiancée, Stella Morris, who said,

“His rights that are being violated are your rights too. If he loses this, we all lose.”

This event had been billed as an effort to put the ‘War on Terror’ on trial, and no doubt high hopes were held for a full condemnation of the US and its allies, of which the UK was only too complicit.

It was nothing of the sort in the end. After all, give a left-leaning politician or academic a microphone, and somehow, they’ll shoehorn their specialist subject into their allotted speaking time. That’s what happened, and so while most drifted off-topic, the international flavour of the ‘tribunal’ made it clear that support for Assange and calls for his freedom came from as far away as his homeland of Oz, from Ecuador, the nation that afforded him sanctuary for a time, from the US, and throughout Europe.

All eyes will be on the Royal Courts of Justice this Wednesday when the US government launches a full appeal in a hearing expected to last two days. This clamour might ensure that nothing untoward will pass. That enough people are keeping a close watch so the pressure is not on Assange, or the bench, but on President Joe Biden’s legal team. It won’t be comfortable for them.

The Americans want Assange to face a US court, and the potential sentence of 175 years in prison for allegedly helping former US Army analyst Chelsea Manning break into a classified computer network and conspiring to obtain and publish classified documents in violation of the Espionage Act.

In fact, so desperate were they to punish Assange that plans were even discussed among the top spooks of the CIA about abducting or even assassinating the WikiLeaks founder while he was holed up in Ecuador’s London embassy. Most British people would probably balk at that idea.

And that could be enough to secure Assange his freedom and a chance to bid farewell to his cell in Belmarsh. We should know this week if the British courts have the guts, and the inclination, to reject the American appeal.

If the court fails Julian Assange, the UK’s complicity in what Snowden and others are certain will be his murder, will not pass unnoticed. The world is watching.