22 Nov 2021 – Israeli State-sponsored terrorism and incitement against the Palestinians are not new. The intensity that we currently see, particularly since the uprising of May 2021, is a serious cause for concern. A reporter stands in front of a bulldozer digging up rocks during the building of Israel’s apartheid wall in Al-Walaja, West Bank near Bethlehem. Photo | Activestills

The Naqab–Zionist incitement against Palestinians–is at an all-time high but you wouldn’t know it by reading the international press because it is all done in Hebrew. The violent, racist-supremacist discourse that takes place in the Israeli media and among Israeli politicians is also done in Hebrew and so it gets little or no attention. And so, as the world remains comfortably numb, the Zionist apartheid state is wiping Palestine — or what remains of it — off the face of the earth. The intent is to push Palestinians out of their homes, to take their land, to erase their history, and eventually, to come to the moment Israelis have all been waiting for: the final, glorious destruction of Al-Aqsa and the building of a so-called third Jewish temple in its place.

Wadi Ara is a valley in Northern Palestine that connects the coastal plain to Marj Ibn Amr. In 1948, heavy fighting took place in the area and it was eventually occupied and became part of the State of Israel. While there were villages that were destroyed and subjected to ethnic cleansing, many Palestinians did remain steadfast and, to this day, the area is home to Palestinian towns and villages with a combined population of close to 120,000. This reality is one that Zionists, in general, find troubling.

From the outset, Israel has been obsessed with demographics, and particularly what they refer to as the “demographic threat,” wherein Palestinians outnumber Israelis. There have been many open discussions about how to deal with the large Palestinian population that still resides in this very strategic area of northern Palestine. Talk of transferring the people — with or without the land — outside of the state of Israel is not uncommon, and the term “Judaizing the Galilee,” which means boosting Israeli presence in the area so as to create a “Jewish majority,” is not uncommon either. 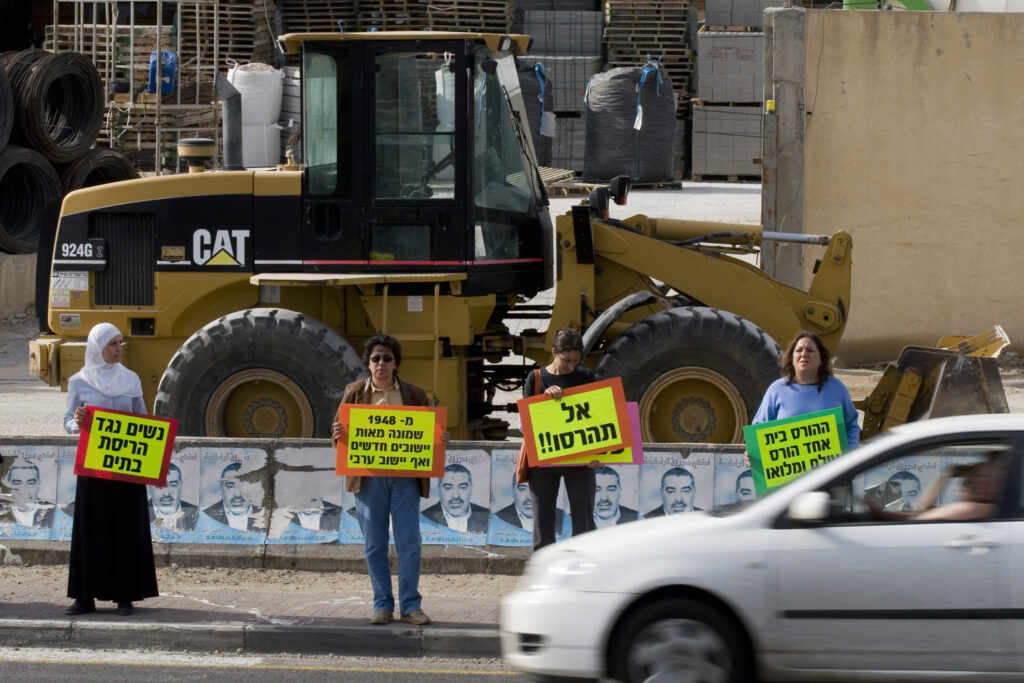 However, in a recent interview with the Israeli daily Ma’ariv, retiring Israeli Army General Yitzhak Turgeman took the incitement against the Palestinian citizens of Wadi Ara to a whole new level. He warned that in a future war, military convoys going north will have to avoid driving through Wadi Ara. This, he said, is one of the conclusions the Israeli top brass reached as a result of the Palestinian uprising that took place in May of 2021, in which all of Palestine resisted the Zionist oppression, the desecration of the Al-Aqsa mosque, and the brutal bombing of the Gaza Strip.

According to a piece in The Times of Israel, General Turgeman is quoted as saying,

What I’m really concerned about… is the impact of violent disturbances on internal security and movement of IDF’s transport convoys… It is a factor that I foresee as having significant potential to delay the ability to maneuver IDF troops.”

A piece in the Hebrew news outlet Mako reports about an event that “raised serious concerns in Israeli military circles.” It was during the funeral of former Palestinian Minister for Prisoner Affairs Wasfi Qabha. According to the report, written in Hebrew, there was a large turnout of armed Hamas fighters during the procession. Qabha was a Hamas leader and, the report claims, this not only worried the Israeli military but also presented a serious problem for the Palestinian Authority.

“Armed members of Qassam Brigades were marching in the street during the procession,” the report states, and it continues, “This is not Gaza but Jenin,” which, the readers are reminded, is near the northern Israeli city of Afula. Jenin does in fact sit in the very northern boundary of the West Bank which means it is close to many Israeli settlements in 1948 Palestine.

Hardly a day goes by that Israeli politicians and the Israeli media do not incite against the Palestinian Bedouin of the Naqab. They are portrayed as violent, armed gangs who take over “Jewish-owned” land or “state-owned” land, and as a community that presents a threat to the law-abiding good Jewish citizens of the Naqab, and there is a constant demand that the state use harsher, more punitive measures to control them.

As it is, over the last several years more than 2,000 homes were demolished per year in the Naqab alone. Some of Israel’s most affluent communities and highest standards of living can be found among the Israeli settlements and cities in the Naqab, while the Palestinian Bedouin live in abject poverty as they see their lands being taken and cultivated by their occupiers.

The Hebrew news outlet Walla reports from the occupied city of Bir El-Saba, known as the capital of the Naqab, about a recent outbreak of violence between two Bedouin clans. The Zionist mayor of the city used every codeword in the Hebrew language to call on the government to come down hard on the Palestinian Bedouin community. While the State of Israel ignores and even encourages violent crime within the communities of its Palestinian citizens, Israeli politicians ignore the pleas of the community to disarm the gangs but never miss an opportunity to blame the violence on the community itself. 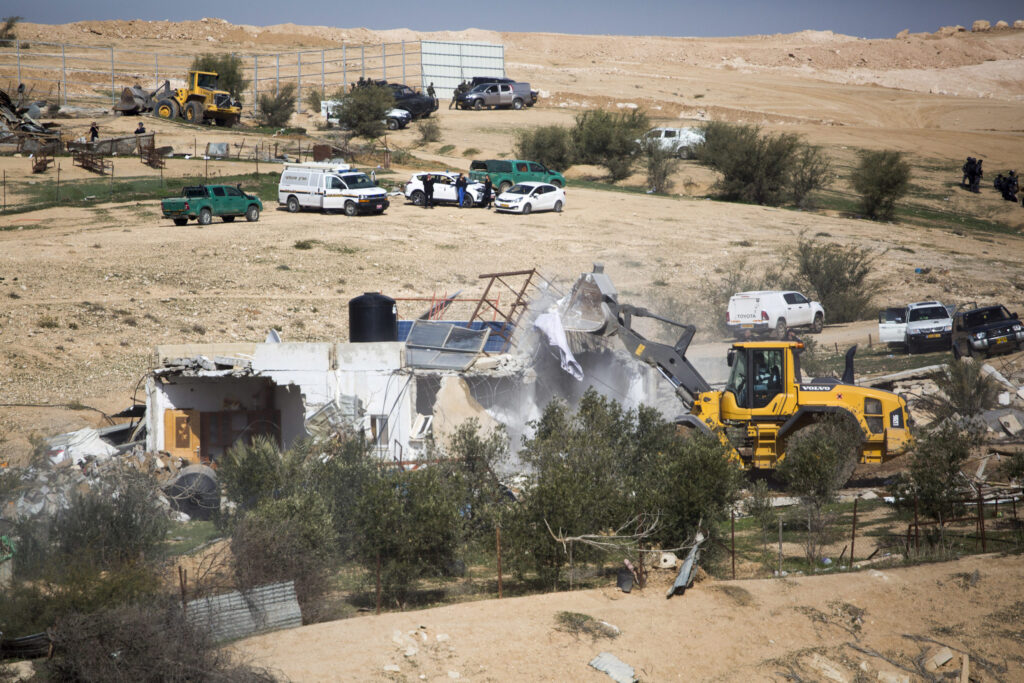 Israeli bulldozers demolish a house in a Bedouin village of Umm Al-Hiran, in the Naqab. Photo | Activestills

Mayor Ruvik Danilovitch said that, “the State has lost all control,” and that “the militias must be dismantled. He also referred to the Bedouin as terrorists, saying that, “the State needs to fight the internal terrorism.” He called on the government to make use of the Shabak, the Israeli secret police, which detains and tortures Palestinians regularly. It should be noted that Palestinians in the Naqab are already governed by a separate government agency over which they have no control and in which they have no say, while the Shabak regularly detains and tortures young activists from the Naqab.

Known as “The Israeli Agency for Bedouin Development,” the agency has its own policing unit called “Yoav,” which is a highly militarized, commando-like unit that is used primarily against the Bedouin community in the Naqab. The agency, and the Yoav units that are attached to it, are not the only ones working to make life impossible for the Palestinian community in the Naqab. The Israeli NGO Regavim conducts nationwide campaigns of smear and incitement against Palestinians in general and against the Palestinian Bedouin of the Naqab in particular.

The Israeli State-sponsored terrorism and incitement against the Palestinians are not new. The intensity that we currently see, particularly since the uprising of May 2021, is a serious cause for concern.

Miko Peled is MintPress News contributing writer, published author and human rights activist born in Jerusalem. His latest books are The General’s Son: Journey of an Israeli in Palestine and Injustice, the Story of the Holy Land Foundation Five.