Who Has the Most Delegates at the COP26 Summit? The Fossil Fuel Industry

But while top oil executives are feeling unwelcome, many in the industry are in Glasgow to talk about carbon trading. 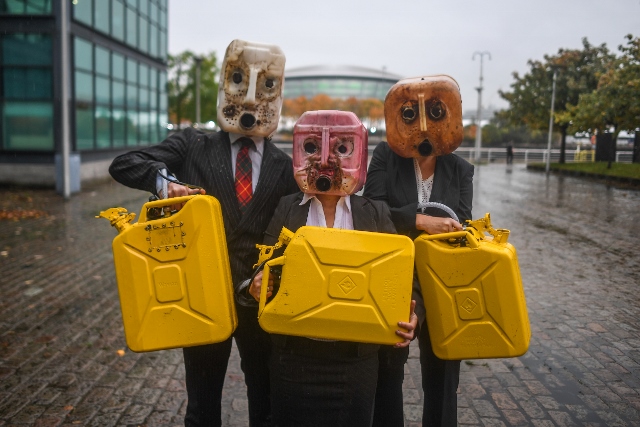 8 Nov 2021 – The largest delegation at the COP26 climate summit does not belong to the United States, which is trying hard to reinstate itself as a climate leader, or to the United Kingdom, the host nation that pulled out the stops by adding Prince William and David Attenborough to its list of delegates.

The prize for largest delegation went to the fossil fuel industry, which, as a whole, sent more delegates than any single country, according to the advocacy group Global Witness.

Climate activist Greta Thunberg was not impressed. The Swedish teen tweeted, “I don’t know about you, but I sure am not comfortable with having some of the world’s biggest villains influencing & dictating the fate of the world.”

Conference arithmetic can be difficult. Almost 40,000 delegates registered for COP26 in Glasgow, making it the biggest COP in history, though the list doesn’t say how many actually showed up. And while Brazil sent 479 delegates to Glasgow, the largest team of negotiators at the summit, Global Witness and others analyzed a provisional delegate list published by the United Nations and found that 503 people linked, directly and indirectly, to the fossil fuel industry have been accredited for COP26.

This is larger than the combined total of delegates from Myanmar, Haiti, the Philippines, Mozambique, the Bahamas, Bangladesh and Pakistan, the regions and countries worst affected by climate change, the group said.

The United States sent 165 delegates, including former president Barack Obama, who was attending events on Monday. The United Kingdom sent 230.

Murray Worthy, the gas campaign leader at Global Witness, said the “presence of hundreds of those being paid to push the toxic interests of polluting fossil fuel companies will only increase the skepticism of climate activists who see these talks as more evidence of global leaders’ dithering and delaying.”

The group said its analysis found that some of the delegates with links to fossil fuel interests were parts of official country designations from Canada, Russia and Brazil. The researchers said that over 100 fossil fuel companies were represented at COP26, including Royal Dutch Shell, Gazprom and BP, as well as 30 trade associations and membership organizations. Last month, Royal Dutch Shell announced that it wouldn’t be attending the summit.

“We were told that we were not welcome, so we will not be there,” said Ben van Beurden, the company’s chief executive, when answering questions on its third quarter earnings results.

His remarks came after he was confronted at a pre-COP26 event in Edinburgh by activists who walked on stage during his speech and said that Shell had no place speaking at the event.

Shell on Monday said that the company didn’t send any executive-level people, and that it didn’t sponsor a pavilion or host any events. The company did have a few climate specialists who were attending events at the margins of the conference.

According to the U.N. list, Shell sent six people and BP sent seven. Shell’s slate included a vice president for carbon capture, utilization and storage, and the head of climate policy and advocacy.

Van Beurden’s well-publicized comments sparked a debate about the role of fossil fuel companies in tackling climate change and the extent to which they should be included in climate talks.

Big oil and gas firms were effectively banned from sponsoring events at COP26 after organizers laid out their criteria. Sponsors had to not only set net-zero targets, which Shell and BP have done, they also had to show a “credible action plan to achieve this, independently verified through the science-based targets initiative.”

Some of those identified as fossil fuel lobbyists rejected claims that their presence would obstruct talks, arguing that they are working on finding market-based ways to reduce emissions. The biggest bloc identified by Global Witness was from the International Emissions Trading Association (IETA), which promotes markets for trading credits. They have 103 delegates in attendance.

Harry Stevens is a graphics reporter at The Washington Post. He was part of a team that won the 2020 Pulitzer Prize for Explanatory Reporting for the series “2C: Beyond the Limit.”