Breaking Down the State

For Edward Snowden and Thousands more Whistleblowers like Him

This text concentrates on interactions between protestors and the various players who comprise the state, from courts to police, legislators to bureaucrats. Again, some remarkable contributors are helping to develop a new language for describing political interaction. 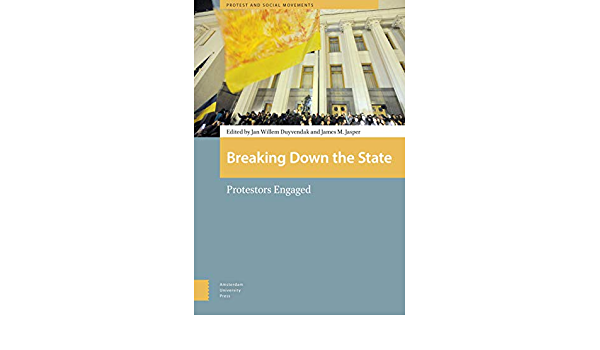 “The State … does not exist in the phenomenal world; it is a fiction of the philosophers. What does exist is an organization, i.e., a collection of individual human beings connected by a complex system of relations. Within that organization different individuals have different roles, and some are in possession of special power or authority, as chiefs or elders capable of giving commands which will be obeyed, as legislators or judges, and so on. There is no such thing as the power of the State; there are only, in reality, powers of individuals – kings, prime ministers, magistrates, policemen, party bosses, and voters.”
— A.R. Radcliffe-Brown

Players and Arenas Formerly Known as the State

Those who study protest and social movements recently emerged from a period of paradigm wars (Goodwin and Jasper, 2004). Structuralists began to incorporate culture and to develop more dynamic models (McAdam et al., 2001; Tilly, 2008). Culturalists began to add emotions to the frames, identities, and narratives that were their major tools (Gould, 2009).

Both historical (Marxist and Tourainian) theories and rational-choice theories faded from the landscapes in both the United States and Europe (Accornero and Fillieule, 2015). This should open the way to theoretical synthesis, but instead there has been more of a retreat from theory altogether (Rucht, 2015). Yet from the rubble a new synthesis has recently begun to emerge. It is more micro than macro, but more cultural than the traditional micro approaches of rational-choice and game theories (Jasper, 2010; 2012a).

Its focus is on strategic interactions, in which players emerge and engage one another in structured arenas. Although it revives elements of the Chicago School of Robert Park and Erving Goffman, the new paradigm – if we can apply such a grand label to a collection of middle-range theories – is not directly related to any of the grand paradigms of the past (Cefaï, 2006). It can incorporate emotions, leaders, and creativity – concepts neglected in many older theories – without abandoning structures, culture, and other traditional concepts. It also acknowledges the decisions at the heart of rational-choice theory and the expectations from game theory.

Breaking Down the State aims to elaborate on this strategic perspective, also developed in the companion book, Players and Arenas. That volume examined other major players: internal factions, foundations, corporations, professions, unions, intellectuals, scientists, the media, religious groups, and bystanders.

This book looks at official state arenas plus the United Nations. Both volumes are concerned with the interactions between protestors and these other prominent players. Here are some components of this strategic interactionist view, developed more thoroughly in the introduction to Players and Arenas (also Jasper, 2004; 2006).

Jan Willem Duyvendak is professor of Sociology at the University of Amsterdam.

James M. Jasper teaches at the Graduate Center of the City University of New York.