How to Counter the Growing Threat of Agent Provocateurs

Those who want movements to fail will try to lure them into violence. A new handbook shows how to reduce that risk. 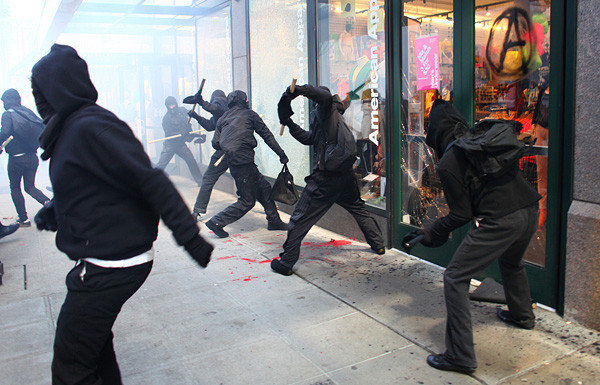 It’s easy, however, to overlook a key activist vulnerability that accompanies these moments of increased passion and determination — namely, the increased chance that our opponents will try to lure us into violence by secretly using “agent provocateurs.” Such individuals are planted among us to masquerade as activists, but are actually paid to coax us into using violence.

This is a good time to be wary of that possibility.

As a young activist, I was eager to learn the lessons available from previous movement experience as quickly as possible — I didn’t want to learn the hard way by making all the mistakes myself. Whenever Martin Luther King Jr.’s senior advisor Bayard Rustin came to town, I could be found sitting at his feet. That went for Bayard’s own mentor A.J. Muste, too — and one of Muste’s stories seems particularly relevant in this moment.

At one point Muste found himself chairing the strike committee for a militant trade union, and he became curious about a member of the committee who persistently argued for violent tactics to defend against the violence that was escalating against the workers. Muste did some sleuthing, and discovered that the man was being paid to incite the workers to turn to violent tactics. So he “outed” the man, and the union remained nonviolent in response to the violence against them — which ultimately led their strike to victory.

That story was eye-opening: those who want our struggles to fail may want us to turn to violence, figuring then we’re more likely to lose. It’s useful for them to persuade or hire an “agent provocateur” (a French phrase because this is international phenomenon) to turn a just movement to violence. 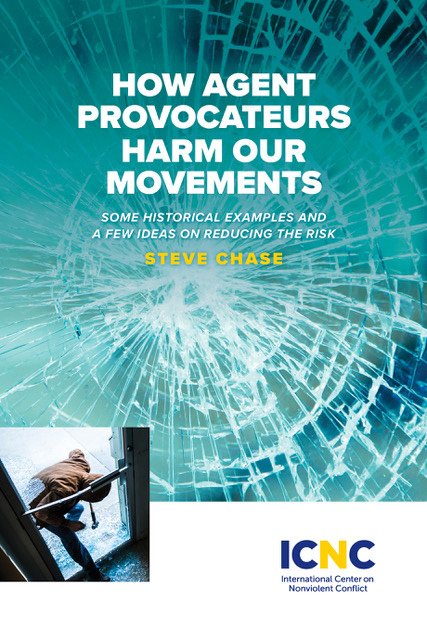 At this moment in U.S. history there’s a rapid growth of social movements clamoring for change. The guardians of the status quo are bound to feel threatened, and as they lose ground they’re likely to be tempted to use agent provocateurs to turn us violent. Just in time, nonviolent researcher Steve Chase has produced a short handbook for us that responds to this problem: “How Agent Provocateurs Harm Our Movements: Some Historical Examples and a Few Ideas on Reducing the Risk.” Steve tells stories from the United States, Central America, Thailand, Syria, Sudan, Poland, China, the United Kingdom and Canada — all countries where agent provocateurs have tried (sometimes successfully) to turn nonviolent movements violent.

During the war in Vietnam, I led a Quaker peace group, Friends Peace Committee, that frequently organized the largest antiwar demonstrations in Philadelphia. One day, on my desk, I found a large manila envelope with no return address. Inside were photocopied FBI documents showing that one of our staff had been reporting the group’s plans for upcoming demonstrations. I was active in the civil rights movement and heard stories of FBI meddling, but here was our staff member actually enabling the FBI — if they so chose — to plan operations that could spoil the demonstrations with violence appearing to come from protesters.

In our case, their ploy didn’t work because we always had trained peacekeepers with identifiable armbands primed and ready to diffuse any trouble, but in other places in the country it did work. In his handbook, Chase tells the story of “Tommy the traveler” who posed as an organizer for the antiwar Students for a Democratic Society, offering members guns, bombs and training in “guerrilla tactics.” He succeeded with at least two members, and boasted that “there’s a thousand guys in the field like me.” Our war-making government very much wanted the antiwar movement to turn violent.

During that period, the FBI and police paid extra attention to the Black liberation movement — something Chase covers in his handbook. Reading that chapter reminded me of an experience in Philly, when a group of young white people decided to serve as allies of the Black liberation movement. Although the white group’s tactics were strictly nonviolent, they didn’t promote themselves as such, fearing they might be seen as breaking solidarity with the gun-carrying Black Panthers. As it turned out, their reluctance to be open about their nonviolence made the white allies more vulnerable.

The police exploited that vulnerability by, one night, breaking into an apartment where some of the group leaders lived — pinning them in the living room while allegedly placing dynamite in their kitchen refrigerator. A few moments later, the police “found” the explosives and charged the organization with intention to use violence. That raid virtually destroyed the white ally organization. (A few years later, a couple members of Philly’s Black Panther movement sat on the sofa in my living room and admitted to a group of us that, by embracing guns, they had made “a militarist error.”)

The problem with saying movements must be ‘totally nonviolent’ to succeed

Bringing the threat of the agent provocateur into the Trump era, Chase’s new handbook incorporates the most recent research on the success-rate of movements that have high nonviolent discipline and movements that don’t. (Spoiler alert: movements that attempt to defend participants violently, or use “diversity of tactics,” are less likely to win their objectives.)

In the section on practical measures to prevent agent provocateurs from undermining us, Chase helpfully describes the downside of security culture and shares multiple options that together are more effective, like affinity groups and training. The booklet is available as a free download from the International Center for Nonviolent Conflict.

As someone who remembers listening to wisdom from the hard-won experience of elders, I rejoice that so much knowledge is now so easily accessible.

George Lakey has been active in direct action campaigns for over six decades. Recently retired from Swarthmore College, he was first arrested in the civil rights movement and most recently in the climate justice movement. He has facilitated 1,500 workshops on five continents and led activist projects on local, national and international levels. His 10 books and many articles reflect his social research into change on community and societal levels. His newest books are Viking Economics: How the Scandinavians Got It Right and How We Can, Too (2016), and How We Win: A Guide to Nonviolent Direct Action Campaigning (2018).