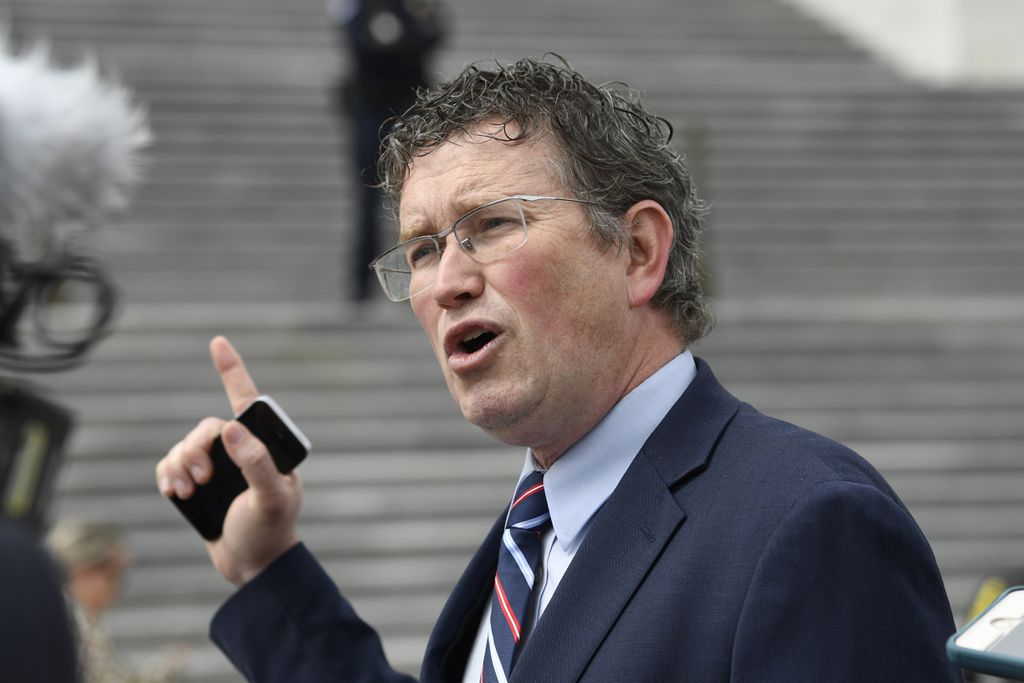 4 Dec 2021 – Republican US Representative Thomas Massie of Kentucky received swift condemnation for posting a Christmas-themed photo of him and his family holding firearms on Saturday afternoon.

The post has been called out as being insensitive given Tuesday’s school shooting in Michigan that resulted in the deaths of four Oxford High School students. The shooting suspect, Ethan Crumbley, has been charged as an adult with crimes including murder and terrorism. His parents, James and Jennifer Crumbley, each face four counts of involuntary manslaughter.

In the congressman’s image, the Massie family of seven smiled and posed in front of a Christmas tree, guns in hand. Massie, a Massachusetts Institute of Technology graduate, posted the photo with a caption saying “ps. Santa, please bring ammo.”

Michigan shooting suspect Ethan Crumbley received a gun for Christmas and tested it out with his mother, according to social media posts acquired by Oakland County Prosecutor Karen McDonald, days before investigators say he shot and killed students at his high school.

Some Twitter users expressed their disgust at the timing of Massie’s post and replied with images of the Michigan victims, who ranged in age from 14 to 17.

Being how fresh the shooting occurred, this is extremely disrespectful for the families of the victims.

Their parents would disagree pic.twitter.com/pWhUdeN7dj

Others brought up the uncanny resemblance of the Massie’s family holiday photo with those taken of extremists, including the Islamic State.

You must be so proud pic.twitter.com/kIxZoEyZih

While some replied and said that Massie’s implied pro-gun argument is rife with hypocrisy when compared to Republican anti-mask and anti-abortion stances.

Another person said it looked like one of them was pointing their gun at someone in the photo.

Finally, Fred Guttenberg, whose child Jaime was killed in the 2018 Parkland, Fla., school shooting, shared the last photo he took of her.

.@RepThomasMassie, since we are sharing family photos, here are mine. One is the last photo that I ever took of Jaime, the other is where she is buried because of the Parkland school shooting.

The Michigan school shooter and his family used to take photos like yours as well. pic.twitter.com/MsQWneJXAp

Material from the Associated Press was used in this report.

Lauren Booker, Globe staff, can be reached at lauren.booker@globe.com.