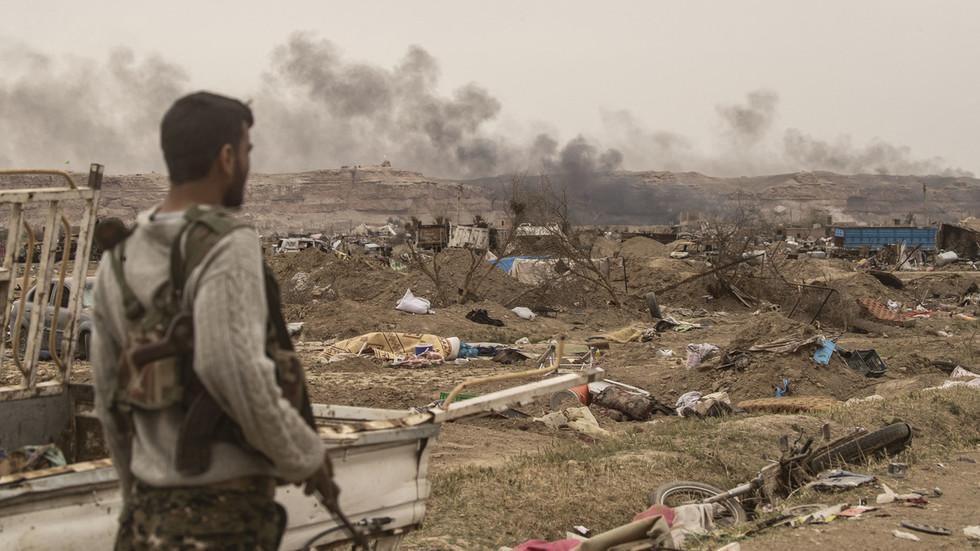 15 Dec 2021 – Two recent reports by the New York Times highlight some of the US’ manifold crimes in Syria, murdering untold numbers of Syrian civilians over the years, under the pretext of fighting the Islamic State.

They exposed a 2019 US bombing in Baghuz, eastern Syria, which killed 70 civilians, and that this was but one of numerous instances, with the Delta Force routinely launching “reckless airstrikes” while purportedly fighting ISIS.

Stating the obvious: had the wanton and repeated mass murder of civilians been committed by Syria or Russia, it would have been in headlines, ad nauseam… because the legacy media genuinely cares about the Syrian people. But, since the crimes were committed by the US, we’ll neither see outrage nor crocodile tears. In fact, it’s pretty shocking that the New York Times, a noted apologist for American Imperialism which has promoted outright fabrications about Syria over the years, has deigned to report honestly on actual war crimes in the country.

Former Pentagon and State Department adviser Larry Lewis said Talon Anvil's toll of innocents was ten times that of other units. "It was much higher than I would have expected from a US unit, The fact that it increased dramatically and steadily over a period of years shocked me."

In April 2019, Airwars (and Amnesty International) reported that, “at least 1,600 civilians died in Coalition strikes on the city of Raqqa in 2017 during the battle to evict so-called Islamic State – ten times the number of fatalities so far conceded by the US-led alliance, which had admitted 159 deaths to April 24th.”

It noted that, “most of the destruction during the battle for Raqqa was caused by incoming Coalition air and artillery strikes – with at least 21,000 munitions fired into the city over a four-month period. The United Nations would later declare it the most destroyed city in Syria, with an estimated 70% laid waste.”

Along with reporting from Syria since 2014, I’ve keenly followed news on the subject and, unless my memory betrays me, I don’t recall overwhelming media outrage following this report.

In November, former United Nations Weapons Inspector and former Marine Corps Intelligence Officer, Scott Ritter, wrote: “The Battle of Raqqa became a template for all future anti-ISIS operations involving the SDF and the US going forward. By the time the mopping up operations around Baghuz were conducted, in March 2019, there was in place a seamless killing machine which allowed the US to justify any action so long as it was conducted in support of an SDF unit claiming to be in contact with ISIS.”

in March 2017, aircraft directed by the team dropped a 500-pound bomb on a building in the village of Karama, where more than 50 people were taking cover.

The US strikes were apparently meant to be portrayed as “self-defense” protecting US proxies on the ground, a feeble excuse for the slaughter that occurred. Yet, what Syria, with the aid of allies, has been doing the past ten years has literally been self-defense: defending the country against the death squads supported and funded by the West, the Gulf, Turkey and Israel in their war on Syria.

Were such death squads to descend on Western cities, they would almost immediately be eviscerated. This scenario is highly unlikely given that the terrorists are tools of the West, but this illustrates the hypocrisy of the situation: Syria has been doing its utmost to restore security to the nation, via strategic warfare against terrorist factions, as well as reconciliation deals enabling Syrian armed men among the foreign terror groups to lay down their weapons and return to civilian life. Simultaneously, the US, their allies, and the terrorists they support, have wantonly murdered Syrian civilians and wreaked destruction on the country.

Referring to the New York Times reports, RT reported recently that former Pentagon and State Department adviser Larry Lewis, who co-authored a 2018 DoD report on civilian harm based on classified casualty data, said the rate was “10 times that of similar operations he tracked in Afghanistan.’ … and that, when interviewed by the New York Times, Gen. Townsend blamed any civilian casualties on “the misfortunes of war.”

It should be no surprise to any thinking person that the US has committed untold war crimes in Syria (and many other countries) during its illegal presence in the country. Still, even with ample documentation of these crimes, the US is not held accountable. Completing this unjust scenario, the US and allies have repeatedly hurled unfounded accusations of chemical weapons attacks and Russian war crimes, providing no evidence and generally relying on unnamed sources or the al-Qaeda-affiliated White Helmets.

I wrote about this last year, noting, “A UN-mandated report, which accuses Russia of war crimes in Syria, heavily relies on anonymous sources and lacks evidence, but also smacks of deliberate disinformation that is halting the eradication of terrorism in Idlib.”

Emphasizing that this report was based on testimonies taken in Turkey, Jordan, Lebanon or by phone, I noted, “I scoured the 24 pages of the report, but even in the annexes I could find no transparent and credible sources, only the following vague terms repeatedly referred-to: Witnesses, civilians, NGO rescuers, medical teams, first responders, flight spotters, and early warning observers.”

In the relentless propaganda against Syria, and Russia, that report got a lot of traction in regime-change media. The recent reports on US crimes in Syria? Not so much.

Some days ago, the Twitter account @USEmbassySyria tweeted about the US standing firm in its commitment to human rights and the rights of women. A ludicrous tweet given the US’ support for terrorists who quash human rights and imprison and rape women.

…which is why the US backed terrorism in Syria. …because: women's rights 🙄🤦🤦‍♂️🤦‍♀️ https://t.co/1LhIL23khR

It is also worth mentioning that Twitter account represents a non-existent entity: in their push for human rights for Syrians (as they bomb and murder Syrians or starve them with sanctions), the US Embassy in Syria long ceased to exist, as did most embassies involved in the plan to put extremist terrorists in power.

In a world where Israel can daily imprison and slaughter children and other Palestinians, and Saudi Arabia can wage war on Yemen while beheading its own civilians, the crimes of the US (and allies) in Syria are sadly not surprising.  Nor are they new. The US has a decades-long history of attempting regime-change in Syria.

But seriously? Syria and Russia are to blame in this upside-down world…?