The increase in cattle in Acre helps drive the state’s economy, but activists say they’re concerned it could lead to an increase in deforestation in the Amazon. In 2021, Acre recorded its highest deforestation rate in the 18 years.
Image courtesy of Dr. Eduardo Mitke/Federal University of Acre

With about 80% of its forests still untouched, Acre is one of Brazil’s least-deforested Amazonian states. Bordered by Peru on the west, it represents just 1.7% of Brazil’s huge land mass but is of great ecological importance as it’s mostly covered in both dense and open Amazon rainforest, home to giant anteaters, sloths, and harpy eagles, among hundreds of endemic species.

But in the past three decades, the thriving cattle industry has become a major threat to Acre’s forests, with livestock now outnumbering the state’s human population by a factor of four.

In 1990, Acre’s human population was 400,000, with an almost identical number of cattle, according to data from the Brazilian Institute of Geography and Statistics (IBGE). By 2020, the number of people had grown to nearly 900,000, while the number of cattle was a record high 3.8 million, IBGE data showed.

The livestock population in 2020 marked an 8.3% increase from the year before, according to IBGE data, the highest increase in all the nine states that make up the Brazilian Amazon. The number of cattle within the region grew by 4.2%, while nationwide there was an overall increase of 1.5%.

A report from the Acre state government’s data analysis foundation says the “economic potential of the state’s natural resources is immeasurable” in terms of timber, fruits and medicinal plants. Yet it’s cattle that also plays a key part in Acre’s economy. While wood products contributed 38.7% to the state’s total exports in 2020, meat products were responsible for 28.3%, according to Acre government data.

“The economy in Acre is centered on agriculture, especially livestock,” Dr. Eduardo Mitke, a veterinarian and professor of cattle farming at the Federal University of Acre, told Mongabay by phone. “There’s little economic value in fruit, and the rubber industry is over. While corn and soya have been growing in Acre in the last two or three years, the strongest economic driver in the agribusiness sector is undoubtedly livestock.” 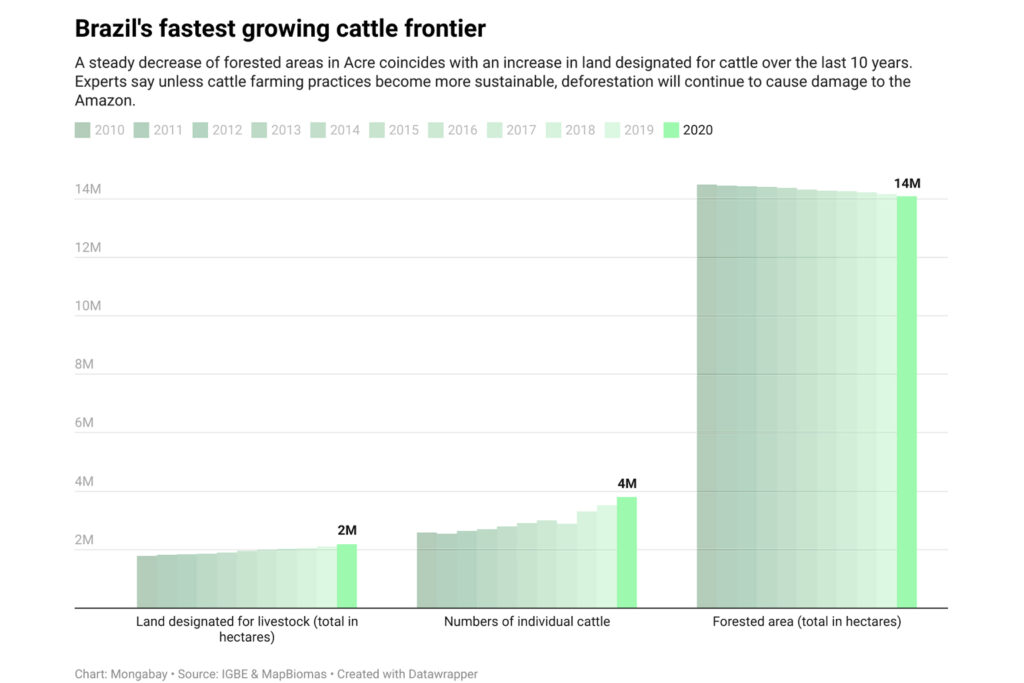 A look at changes in Acre’s cattle numbers from 2010 to 2020. The data shows a mostly consistent increase in cattle, except for in 2011 and 2017 which both had less cattle than the year before. However, over the last ten years, there has been an overall increase by nearly 1.3 million individual cattle in the state. Data from the Association of Brazilian Geographers and IBGE.

The state capital, Rio Branco, has the highest number of cattle in Acre, with 14% of the population. The municipality of Sena Madureira is the second, with nearly 365,000 head of cattle. With 236 km² (91 mi²) of forest loss in August 2021 (15% of the total recorded in the entire Amazon), Acre entered for the first time in third place in the ranking of states that most destroyed the Amazon last year, according to data from Brazilian conservation nonprofit Imazon. Only two municipalities, Sena Madureira and Feijó, accounted for 40% of the state’s deforestation.

Several factors have fueled the growth of the cattle industry in Acre, including an increase in international demand for meat products, especially from China, according to IBGE data. Dr. Mitke said productivity in the Brazilian cattle industry has also gone up by 150% in the last 30 years, allowing ranches to grow their herds. “There’s a technological revolution. It’s slow, but it’s a revolution, nonetheless,” he said. “With improved technology, we’re able to increase the number of animals per hectare, which means we can put more cattle in the same sized area and provide a potential sustainable solution to having livestock.”

Rômulo Batista, a Greenpeace Amazon campaigner, said another possible factor is the practice of land grabbing, where unscrupulous parties occupy and exploit public land and then claim it as private property. “Unfortunately, it’s increasingly common to have livestock in the Amazon as an attempt to validate land ownership,” he told Mongabay by phone. “[The people who take the land] put cattle on the land they took to say there’s some type of farm production there in an attempt to legalize it.”

Activists have raised concerns about the link between the growing cattle industry and deforestation. “Of all the area that has been deforested in the Brazilian Amazon that didn’t later grow back as secondary vegetation, 90% of it is some type of pasture used for livestock nowadays,” Batista said. “We’re now seeing the destruction of the Amazon, a forest with the most biodiversity in the world, just to put two species there: grass and cattle.”

Data from Mapbiomas, a network of NGOs, universities and tech firms that include Google, show that the loss of Acre’s forests over the past 10 years is strongly correlated with the annual increase in land designated for cattle, suggesting a link between the two (see chart below). In 2020, 84,925 hectares (209,854 acres) was deforested in Acre; that same year, land designated for cattle and livestock in the state increased by an almost identical amount: 84,735 hectares (209,384 acres), Mapbiomas data showed. 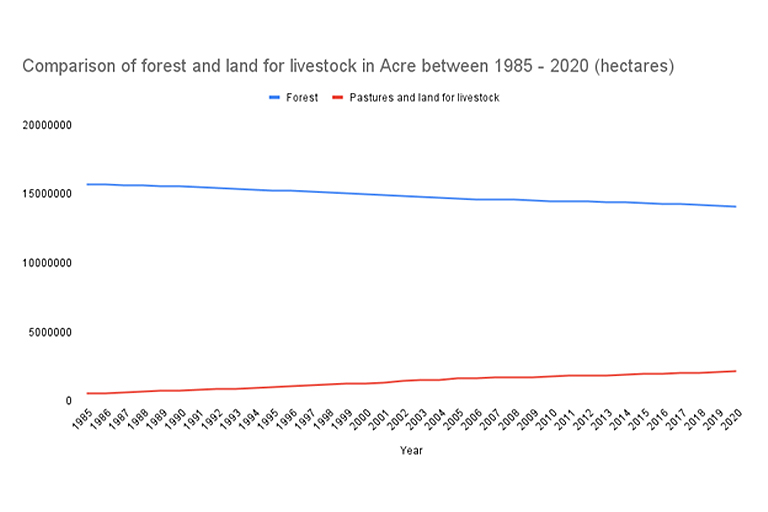 The graph shows a steady decrease of forested areas compared to an increase in land designated for cattle over the last 30 years in Acre. Experts say unless cattle farming practices become more sustainable, deforestation will continue to cause damage to the Amazon. Data from Mapbiomas.

Several studies indicate that the cattle industry is a major driver of deforestation, including a 2013 paper that says “in recent years, 48% of all tropical rainforest loss occurred in Brazil, where cattle ranching drives around three-quarters of forest clearing.” In 2021, with its cattle population swelling, Acre recorded its highest deforestation rate in 18 years, according to data from the National Institute for Space Research (INPE). In total, 10% of forest area in Acre has so far been cut down, according to data from Brazilian conservation nonprofit Imazon. “Acre is not the most deforested state in the Amazon region,” Batista said. “But it stands out because it’s a new area of deforestation. Five, 10 years ago we were always talking about [the states of] Rondônia, Mato Grosso and Pará. Now, we have our eye on Acre.”

The agribusiness sector has justified clearing land to make way for agriculture as a positive development. “Deforestation for us is a synonym of progress, no matter how shocking that is to people,” Assuero Doca Veronez, the head of Acre’s Agricultural Federation, said in a 2020 interview. At the time of the interview, he was referring to Amacro, a planned agribusiness zone in the border area between the states of Amazonas, Acre and Rondônia. The initiative was renamed in late 2021 to the Abunã-Madera Sustainable Development Area (ZDS) and repositioned as a multisectoral and sustainable initiative.

Despite reported changes to the project’s core goals, Batista said he remains concerned about the impact of the ZDS project and the way “development” is managed in Acre. “Without proper planning, livestock and infrastructure cause both cultural and environmental destruction.”

Studies suggest it’s possible to increase cattle production while relieving the pressure on the Amazon rainforest. “This paradigm of horizontal expansion of agriculture over ecosystems is outdated,” a 2020 study says, referring to the traditional method of cattle ranching commonly used in Brazil, where small herds graze on vast expanses of land. The study suggests using a more intensive method that increases production sustainably by raising more cattle on smaller areas of land. 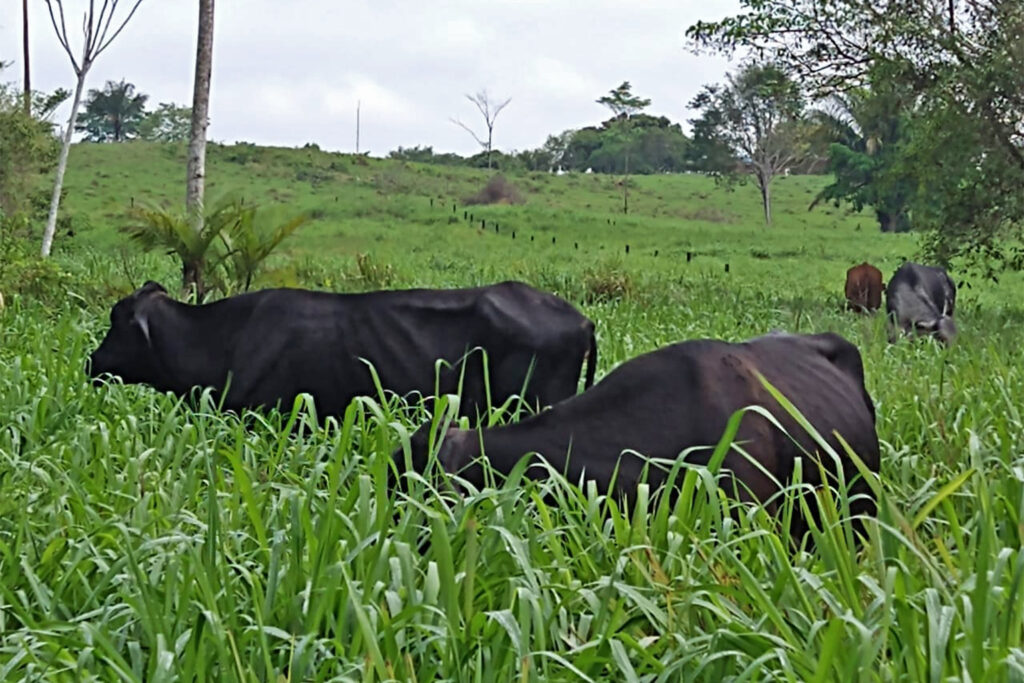 Traditional cattle farming, where cattle are left free to graze on large expanses of land, is the predominant style of ranching in Acre as well as across Brazil. According to Dr. Eduardo Mitke, a veterinarian and professor of cattle farming at the Federal University of Acre, it’s an inefficient method that requires more land to be cleared to accommodate larger herds.
Image courtesy of Dr. Eduardo Mitke/Federal University of Acre.

Dr. Mitke said it’s “economically, environmentally and technically viable to have cattle in Acre while conserving the Amazon” if done in the right way. He added there’s even opportunity to reforest deforested areas while increasing cattle production.

However, he said the current trend of cattle growth in Acre isn’t sustainable, and farmers lack technical assistance and sustainable farming know-how. “The farmer [in Acre] doesn’t know how to expand without deforesting. We need to show them other farming alternatives that don’t harm the environment,” Dr. Mitke said. “We don’t have the slightest need to deforest any more. And if we don’t farm in the right way, we will undoubtedly end up destroying the Amazon.”

Sarah Brown is a freelance journalist with a passion for the environment, sustainability and travel. Her work has been featured in the Evening Standard, Atlas Obscura, World Travel Magazine, among others.