The Danger of False Accusations of Antisemitism 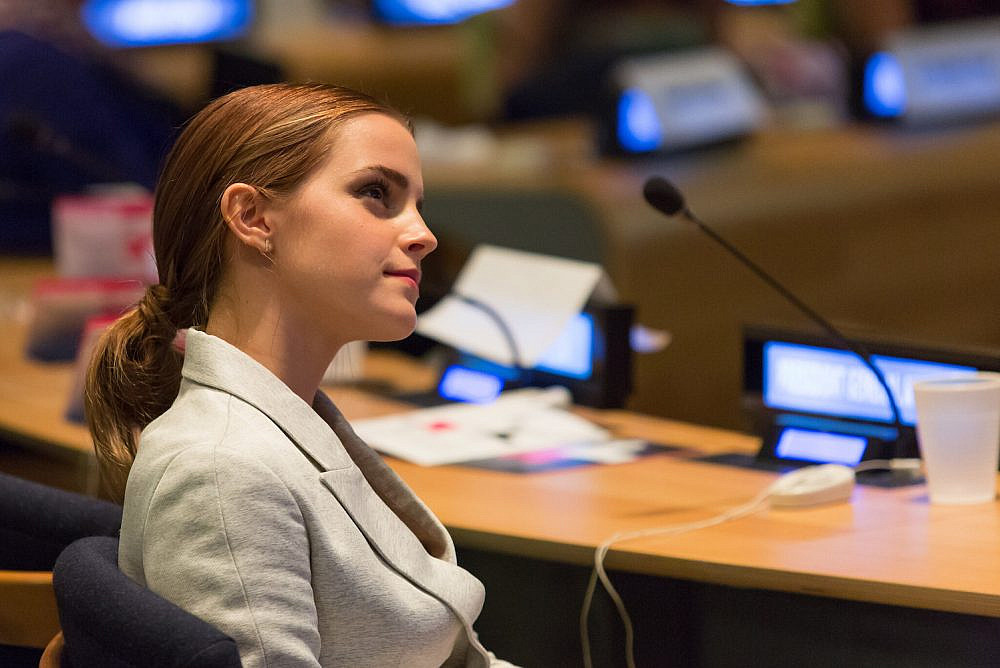 Emma Watson at the launch of the HeForShe campaign in the United Nations Headquarters, New York, September 20, 2014.
(UN Women/CC BY-NC-ND 2.0)

7 Jan 2022 – We are just about a week into 2022, and already the efforts to redefine antisemitism — or, rather, make the term so self-contradictory and amorphous that it is emptied of all meaning — are continuing apace. Mere days before the first anniversary of the Capitol assault, in which an armed, conspiracy-fueled, antisemitic mob tried to sabotage Congress’ electoral vote count, a high-profile Israeli official suggested that posting a picture of Palestinian flags at a protest alongside an open-ended slogan about solidarity is tantamount to anti-Jewish hatred.

The public insistence of Israel’s former UN Ambassador Danny Danon that the British actor Emma Watson is an antisemite for making said post should be recognized for the farce it is. But it also presents an opportunity to assess the deeper meaning of the attempt, by many of Israel’s representatives and supporters, to make the discourse around antisemitism almost entirely coterminous with the one around Israel-Palestine.

Danon’s criticism is a particularly egregious example of what has been the conceptual engine of hasbara, or Israel’s state-sponsored propaganda, for some time: namely, the idea that it is at best ignorant, and at worst antisemitic, to reference Palestinians outside the context of either harm to Israel and Jews, or Israeli munificence on both sides of the Green Line.

This logic rests on a few assumptions. The first is that there is no distinction between the State of Israel and Jews worldwide (which is an antisemitic belief). The second is that, because Palestinians are to be almost exclusively associated with terrorism, anything that suggests they might be deserving of rights, sovereignty, and solidarity is in itself an expression of support for violence against Jews. And the third is that the military occupation is a force for good, not only for the safety of Israel and the Jewish diaspora, but also as “the West’s” last line of defense against “the forces of radical Islam.” From this position, it’s an easy step to condemn support for Palestinians and criticism of Israeli oppression as two sides of the same antisemitic coin.

Slander, false equivalences, and conflation aside, there are several problems with making these claims as a form of Jewish defense. One is that doing so essentially posits Israeli state violence (ethnic cleansing, mass incarceration, extrajudicial killing, land theft, etc.) as a form of protected behavior because it is being carried out by Jews.

The second issue — and this is where the Capitol assault comes in — is that this narrative replicates the kind of conspiracy-mongering that has been so devastating to Jews in the past, and which has made a breakneck resurgence in recent years on the global far right. So much of hasbara rests on the working assumption that Palestinians are part of an international effort to subvert “the free world,” and that they use trickery, deceit, and media manipulation to achieve their aims. The idea of a global Islamic conspiracy is by no means an original one, but its near-universal promotion by successful far-right political parties around the world is a testament to its enduring pull.

All of this is why a seasoned Israeli diplomat can, with a straight face, libel someone as an antisemite over a statement that — with all due respect to Emma Watson — doesn’t actually say a great deal, beyond acknowledging that Palestinians are people with rights that should be fulfilled.

The damage that such spurious accusations cause, including to efforts to tackle actual antisemitism, are, for hasbaristas in the Danon mold, entirely irrelevant. What matters is maintaining the fiction that by supporting Palestinians, you are by default hating Jews. And that — at any time, but especially during a week in which we remember GOP-backed white supremacists rampaging through the Capitol — is a folly, an insult to those fighting and experiencing real antisemitism, and bad news for Palestinians and Jews alike.

Natasha Roth-Rowland is an editor and writer at +972 Magazine, and a doctoral candidate in history at the University of Virginia. Her research and writing focus on the Jewish far-right in Israel-Palestine and the United States. Natasha previously spent several years as a writer, editor, and translator in Israel-Palestine, and is now based in New York. She writes under her family’s true last name in memory of her grandfather, Kurt, who was forced to change his last name to ‘Rowland’ when seeking refuge in the UK during WW2.