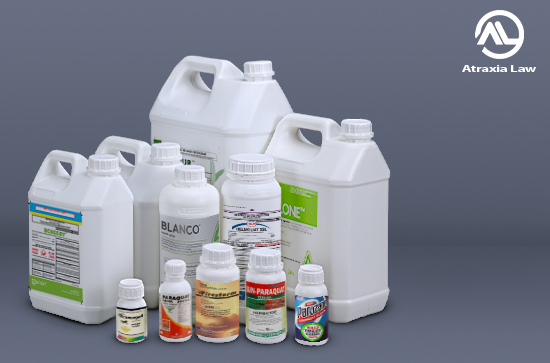 What Are the Brand Names of Paraquat? | Atraxia Law

Over 1 billion pounds of pesticides are used across the United States every year on 900,000 farms and 70 million households. The primary goal of pesticides is to keep unwanted weeds and grasses at bay and to prevent insects from causing damage to crops and plants.

However, many of these substances are toxic to humans, particularly children. Children have a higher uptake rate by the gastrointestinal tract, incompletely developed blood-brain barrier, and undeveloped detoxification system. They are more susceptible to experiencing the negative health consequences of pesticide exposure.

In children, exposure to pesticides occurs by eating tainted foods or living near areas where pesticides are sprayed on crops. The most toxic fruits and vegetables include apples, potatoes, cherries, tomatoes, peaches, strawberries, and celery. Some children’s pesticide exposure stems from both sources, in which case they are more likely to develop a neurodevelopmental disorder early on. Recent studies found that even low concentrations of pesticides could affect young children’s neurological and behavioral development. One of the most infamous pesticides is Paraquat, sold under multiple brand names throughout the United States, responsible for causing Parkinson’s disease.

How Does Paraquat Exposure Cause Parkinson’s Disease?

Over the last two decades, the causal relation between Paraquat exposure and Parkinson’s disease has been widely explored by medical researchers. They concluded that Paraquat exposure induces the neurological disorder by depleting the brain of dopamine, a neurotransmitter involved in movement and coordination, and causing oxidative stress, which contributes to dopamine cell degeneration. The most affected brain region in people with Parkinson’s disease is the substantia nigra.

Most people who struggle with Parkinson’s disease are 60 or older. When the disorder occurs in younger individuals, it is referred to as early-onset Parkinson’s disease. This is often the case of children who develop the neurological disorder known as pediatric parkinsonism. Nevertheless, it is important to mention that a child can have many of the disorder’s symptoms without actually developing Parkinson’s later on.

While the link between Paraquat exposure and pediatric parkinsonism has not yet been clearly documented in medical literature, the disorder can occur due to pesticide exposure. Parkinsonism is partly caused by genetics and partly by environmental factors. Regardless of the age during which it manifests, parkinsonism is accompanied by the following symptoms:

The earlier a child is exposed to Paraquat, even in trace amounts, the higher their chances of developing Parkinson’s disease when they get older are. Shockingly, the risk of developing Parkinson’s disease if exposed to Paraquat increases by 150%. From 1990 to 2014,  the number of people struggling with this neurological disorder more than doubled. The number is expected to double again by 2040. This alarming increase is believed to have a strong connection with air pollution, certain industrial chemicals, metal production, and exposure to chemical pesticides such as Paraquat.

Furthermore, a study from the American Journal of Epidemiology found that exposure to Paraquat within 1,600 feet of a home increases the chances of developing Parkinson’s disease by 75%. Therefore, children who live on farms or in close proximity to agricultural sites where crops are regularly treated with Paraquat are even more likely to come to struggle with Parkinson’s disease. Lastly, suppose the mother was exposed to Paraquat while pregnant. In that case, the child already has a certain pesticide concentration in their body, which only increases their risk of developing Parkinson’s if they are further exposed during infancy and childhood.

To diagnose pediatric Parkinsonism and Parkinson’s disease in adults, a physician would perform a dopamine transporter scan, also known as a DaTscan. This novel imaging test can help observe this neurotransmitter and how it acts in the individual’s brain. Following a DaTscan, the physician might find a breakdown or loss of the cells that produce or contain dopamine. This test is of tremendous help, as before it was created, parkinsonism was diagnosed only by physically examining the patient and going through their health history.

What Other Neurodevelopmental Disorders or Symptoms Can Children Exposed to Paraquat Develop?

In addition to pediatric parkinsonism, children who come in frequent contact with pesticides are at high risk of developing other neurodevelopmental disorders, such as juvenile amyotrophic lateral sclerosis. Furthermore, children might come to struggle with symptoms and issues like cognitive damage, lower IQ, conduct disorders, learning disabilities, vision and hearing impairment, and multiple sclerosis.

Cognitive damage, another neurodevelopmental effect that can be the consequence of pesticides exposure, occurs when a child lacks short-term and long-term memory, has identity confusion, and displays poor judgment. A study from Toxicology Letters found a significant indication supporting a link between exposure to neurotoxic pesticides such as Paraquat and cognitive dysfunction. Moreover, it also uncovered a connection with Alzheimer’s disease, another neurological disorder people exposed to Paraquat and other toxic pesticides are prone to developing.

The Future of Paraquat Use

Paraquat is currently banned in over 30 countries. Strong regulations should be enforced to minimize children’s exposure to pesticides such as Paraquat in the United States, as their risks outweigh their benefits. While some pesticides are very effective in protecting crops from pests, they are extremely dangerous to human health. So far, the use of Paraquat in the United States has been reviewed multiple times by the Environmental Protection Agency. Still, the pesticide remains on the market with various legal ways of using it.

On July 17, 2019, the Protect Against Paraquat Act was introduced in the House by Representative Nydia Velázquez, requesting that the Environmental Protection Agency cancels the registration of all uses of Paraquat and bans Paraquat residue on food. The bill also forbids the sale and use of the existing stock of Paraquat. In early 2021, the Environmental Protection Agency started considering renewing its approval for Paraquat and is to adopt a decision by the end of 2022.

Miguel Leyva is with Atraxia Law, working with people injured by pesticide exposure by gathering and organizing information about Paraquat exposure and Parkinson’s disease.

Anticopyright: Editorials and articles originated on TMS may be freely reprinted, disseminated, translated and used as background material, provided an acknowledgement and link to the source, TMS: Early Life Exposure to Pesticides and Neurodevelopmental Outcomes, is included. Thank you.