How to End the Ukraine Crisis in 4 Steps

Two former top policymakers — one Russian, one American — have a plan they think could work. 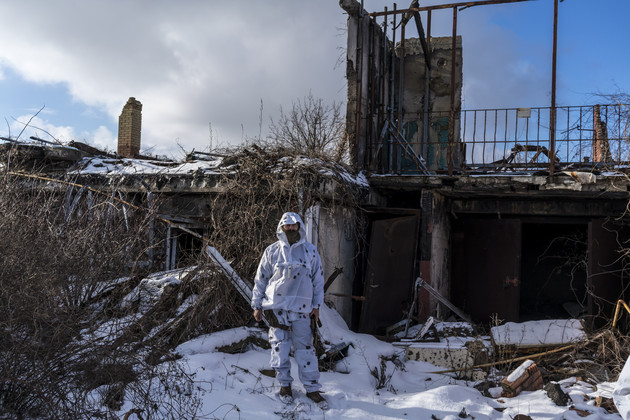 A Ukrainian soldier stands on the front line in Pisky, Ukraine on January 18. Russia has amassed around 130,000 troops on the border with Ukraine.
| Brendan Hoffman/Getty Images

9 Feb 2022 – Europe is on the brink of war. The United States and its allies are convinced that Russia is planning an invasion of Ukraine, and they are threatening “devastating” sanctions should it take that step. Moscow vehemently denies any such plans, while maintaining that Kyiv is preparing for an assault on the Donbas separatists in Eastern Ukraine. Russian military maneuvers in Crimea, Western Russia and Belarus unnerve the West, while NATO plans a buildup of forces along its long frontier with Russia stretching from the Baltic Sea to the Black Sea. Meanwhile, a fitful round of diplomacy preserves hope that the crisis can be defused without military conflict — although the leaked “confidential” U.S. response to Russian demands to halt NATO expansion underscores how far apart the two sides remain.

Is there a diplomatic resolution that will bring enduring peace and stability to the troubled region of Eastern Europe? There is, but getting there requires understanding the essence of the current crisis. It is not simply about Ukraine. It is about the broader European settlement at the end of the Cold War 30 years ago, which Moscow contends was imposed on it at a time of extreme weakness and fails to take into account its national interests. The subsequent eastward expansion of Euro-Atlantic institutions — notably NATO, a political-military organization designed to contain Russia, and the European Union, an economic community that Russia can never join — in Moscow’s views jeopardizes Russia’s security and prosperity. A revived Russia is determined to halt, if not reverse, that process, using all necessary means.

This should not come as a surprise. Great powers, once they can, will seek to revise a peace that was imposed on them after a defeat in a major war. That was the lesson of the Versailles Treaty at the end of the First World War, which was negotiated without the participation of Germany or Soviet Russia. Russia’s economic recovery in the 2000s and the rapid modernization of its military in the past decade have given it the capacity to dispute the Cold-War settlement for the sake of what Moscow believes is a more just one.

The United States will be reluctant to revise a European order that has served its interests extraordinarily well for the past three decades. Absent significant adjustments, however, intermittent crises such as the current standoff are inevitable. A lasting peace requires that Russia’s interests be accommodated so that it has a stake in that order. The challenge is to find a way forward that satisfies at least Moscow’s minimal security requirements without requiring the United States and its allies to compromise their core principles and interests.

To be sure, the path forward is treacherous, but it exists. It will take flexibility and creativity on both sides to navigate it successfully. The risk of a war that would prove catastrophic for Europe, and first of all Ukraine, and threaten escalation to a nuclear cataclysm should concentrate minds.

We see four elements to a solution. First, restrictions on military operations along the NATO/Russia border. Second, a moratorium on NATO expansion eastward. Third, resolution of ongoing and frozen conflicts in the former Soviet space and the Balkans. And fourth, modernization of the 1975 Helsinki Accords, which created a pan-European forum and articulated agreed principles of interstate relations to undergird East-West detente.

These four elements must be negotiated as a package, although progress is likely to proceed at different paces along the four tracks, because both the United States and Russia need to see where they are headed before they will engage in substantive talks on details.

Curb military operations. To reintroduce military restraint along the Russia/NATO frontier, the two countries can begin by resurrecting aspects of Cold War agreements that have fallen into abeyance in recent years as one or the other side lost interest in adhering to them. Both sides agree that this is an important step, although Russia insists that it be taken only after the issue of NATO expansion is addressed — one more reason why all aspects of the settlement must be on the table if there is to be progress on any one of them.

Today, the two sides need to reaffirm agreements to avoid dangerous incidents at sea or in the air. They need to negotiate something akin to the Conventional Forces in Europe Treaty that regulated military activities in nonthreatening ways in border areas, taking into account current realities. They need to resurrect the INF Treaty at least for Europe — that is, no deployment of land-based intermediate-range ballistic missiles on the continent. That will require the United States and Russia to resolve grievances that led to the treaty’s demise in 2019, when neither country was prepared to muster the political will to pursue the technical fixes that could answer its concerns. Reaching agreement on these matters will take time, as it did for analogous agreements during the Cold War, but agreement is surely possible.

Agree to a moratorium on NATO expansion. NATO’s expansion eastward is the crux of the current dispute. One of us has proposed a formal moratorium on expansion into former Soviet states, including Ukraine, for 20-25 years. The other proposes 2050 as the year in which the moratorium would end. There is nothing magical about the period; it just needs to be long enough so that Russia can claim its minimal security requirements have been met, and short enough so that the United States can credibly claim it has not abandoned the open-door policy. Even if a moratorium cannot be agreed, it should prove possible to find a mutually acceptable way to make it clear that Ukraine is not going to join NATO for years, if not decades, to come — something American and NATO officials will readily admit in private.

At the same time, the two sides should seek agreement on limits to NATO activities in and around Ukraine that meet Russia’s security concerns, but once again do not compromise NATO’s principles. Those could include a pledge by NATO member states not to build or occupy military bases in Ukraine or to supply Ukraine with offensive weapons systems that could strike Russian territory in exchange for a Russian pledge not to deploy certain weapons systems within a defined zone along Ukraine’s borders. This would not be an extraordinary concession by NATO members. In the 1997 NATO-Russia Founding Act, NATO pledged not to deploy nuclear weapons or substantial permanent combat forces to new member states — because it had no plans to do so in any event. Certainly, NATO can now make pledges to refrain from certain types of activities with regard to nonmembers, if that will help ease Moscow’s concerns.

Resolve “frozen” conflicts. The ongoing and frozen conflicts in the former Soviet space and the Balkans, including Crimea, Kosovo and Donbas, all involve separatism of some sort. All should be resolved on the basis of some form of local democracy, that is, a vote to ascertain the will of the people in the separatist regions is the starting point, after which a series of technical agreements need to be reached to regulate issues that would necessarily grow out of any peaceful secession of a territory from a larger state. The exact form of the vote could be adapted to the specific circumstances of each conflict. It need not be a referendum on the issue of separatism. In the cases of both Crimea and Kosovo, the most prominent conflicts, regularly scheduled elections could serve this purpose, with the stipulation that victory would require that a qualified majority of the electorate vote for candidates who support separatism. The only requirement would be that the vote be internationally observed and then certified as free and fair to erase any doubt that it was legitimate. Such votes would undoubtedly reaffirm what most impartial observers know to be the hard truths that Kosovo will remain independent and Crimea will never go back to Ukraine. A similar vote could be used to determine how to move forward with the Donbas separatist regions, including whether the Minsk agreements should form the basis of the resolution or whether some minor adjustments have to be made to take into account local preferences.

Update the Helsinki Accords. Updating and modernizing the Helsinki Accords would cap a comprehensive settlement, laying the foundation for decades of peace in Europe. In particular, the two sides should seek agreement on the interpretation of the 10 principles guiding relations between states, to which all the parties agreed, including respect for sovereign rights, self-determination, noninterference in internal affairs, restraining from threats or use of force, and peaceful settlement of disputes. The goal is to establish a firm basis for the organization of European security going forward that takes into account historical developments and technological advances since 1975 that affect the way states relate to one another and act on the global stage.

Reaching a comprehensive settlement will take considerable time and effort, but now is the time to start. As was true five decades ago when the Helsinki Accords ushered in a period of detente, no country will get all that it wants, and no country will capitulate to an imposed peace.

The final settlement will be far from ideal in the minds of many; critics will denounce it as appeasement. But the result will be better for all parties than any armed conflict could possibly deliver.

Alexander Dynkin is president of the Primakov National Research Institute of World Economy and International Affairs of the Russian Academy of Sciences and served as an assistant to former Russian Prime Minister Evgeny Primakov.

Thomas Graham, a distinguished fellow at the Council on Foreign Relations, was the senior director for Russia on the National Security Council staff during the George W. Bush administration.