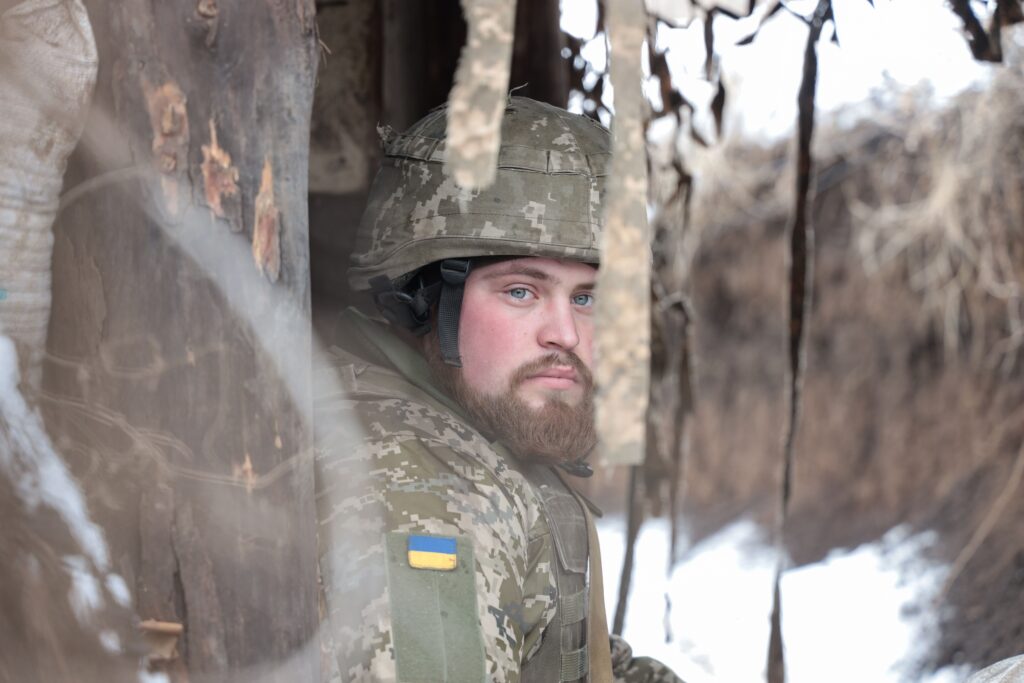 A Ukrainian soldier on the front line near Horlivka, Ukraine, on Jan. 31.
(Stanislav Kozliuk/EPA-EFE/Shutterstock) (EPA-EFE/REX/Shutterstock)

The Biden administration warns of “imminent war,” yet Ukraine’s president tells the administration to calm down, that the false alarms are damaging the country’s economy. Even though President Biden, his two predecessors, Germany and France have made clear that Ukraine is not a national interest worth fighting for, the Biden administration refuses to tell the Russians that it won’t do what it has no intention of doing, even at the risk of armed conflict.

The Russians would win any conventional clash but at a horrendous cost. The Ukrainians would suffer massive casualties and economic ruin. If the United States and Europe were to impose the sanctions that they are planning, the Russian people would suffer, but so would the French and especially the Germans, as Russia provides much of their energy supply.

In Russia, Putin is already under fire for not having taken Ukraine’s eastern Donbas region in 2014, when the Russian military could have walked in. In Washington, Biden is under fire for not being tough enough. Hawks on both sides peddle false historical analogies and lessons, assuming the other side will back down. Their strategy is based on bluster and a prayer.

Is there any way out of this exceedingly dangerous crisis? Perhaps the only hope is the Minsk II agreement, forged in February 2015 between Russia and Ukraine, brokered by Germany and France, and endorsed by the European Union and the United Nations.

Katrina vanden Heuvel: Stop the stumble toward war with Russia

The agreement essentially called for a recognition of reality in law. It guaranteed an independent Ukraine in control of its own borders, with Russian “volunteers” removed, the separatists disarmed and Ukrainian military standing down in the Donbas. It promised full autonomy for the Russian-speaking region of the Donbas within a decentralized Ukrainian federation, written into a revised constitution.

Samantha Power, then U.S. ambassador to the United Nations, told the Security Council in June 2015, “The consensus here, and in the international community, remains that Minsk’s implementation is the only way out of this deadly conflict.”

Obviously, the settlement envisioned by the Minsk II accords has not come to pass. The Ukrainian government refused to move forward on autonomy for the Donbas without prior disarmament of the separatists. The Russians refused to withdraw its volunteers; the separatists demanded first the referendums and constitutional changes before disarming. The United States has refused to pressure Ukraine to move forward on the agreement.

Minsk II is a compromise. As such, it requires hard choices on all sides. Ideally, the agreement would be accompanied by a treaty between Russia and the United States and Europe guaranteeing neutrality for Ukraine, similar to the enforced neutrality of Austria since the Cold War’s early years.

The Ukrainians would have to give up aspirations to join NATO, and accept an autonomous Donbas region. Russia would have to agree to Ukrainian independence and give up any effort to make the country part of any Russian-dominated alliance. As Quincy Institute senior fellow Anatol Lieven notes, this would be a major concession: Putin has seen Ukrainian membership in the Eurasian Economic Union as essential to countering the European Union.

What is the alternative? For all the screeching of the hawks, there is none in sight. The Russians have served notice that the status quo can’t go on. Economic sanctions will not be sufficient to force Russia to allow Ukraine to be part of the West. Ukraine can’t take back its Donbas region on its own. Neither the United States nor other NATO countries have any interest in fighting over Ukraine. But Russia cannot forcibly annex the Donbas, let alone any more of Ukraine, without devastating costs for both sides and Europe as a whole.

For all its hysteria about imminent war, it’s clear that the Biden administration believes Putin is bluffing, that he won’t risk the economic damage that the threatened “severe sanctions” would impose. (Then again, neither will Germany or France.) If that’s right, and Putin doesn’t act, the result is continued low-level war in Donbas, with no end in sight. Russia keeps Ukraine out of NATO, with Ukraine having no chance of developing either a sound economy or a stable democracy. And of course, the danger is that Putin will face escalating pressure from more hawkish factions within Russia. It’s hard to envision why that should be considered a victory.

In Paris last week, seven years after the Minsk II agreement, Ukraine and Russia held marathon eight-hour talks mediated by Germany and France. A new round of “Minsk talks” will be held in Berlin in the second week of February. As we confront the worst U.S.-Russian confrontation in decades, isn’t it time for the United States to join with its allies to revive a path to a settlement that might lead to a stable peace?

Katrina vanden Heuvel, editor and publisher of the Nation magazine, writes a weekly column for The Post. She has also edited or co-edited several books, including The Change I Believe In: Fighting for Progress in the Age of Obama (2011) and Meltdown: How Greed and Corruption Shattered Our Financial System and How We Can Recover (2009).