Arms Flood into Ukraine as US, NATO Pursue Proxy War over Peace 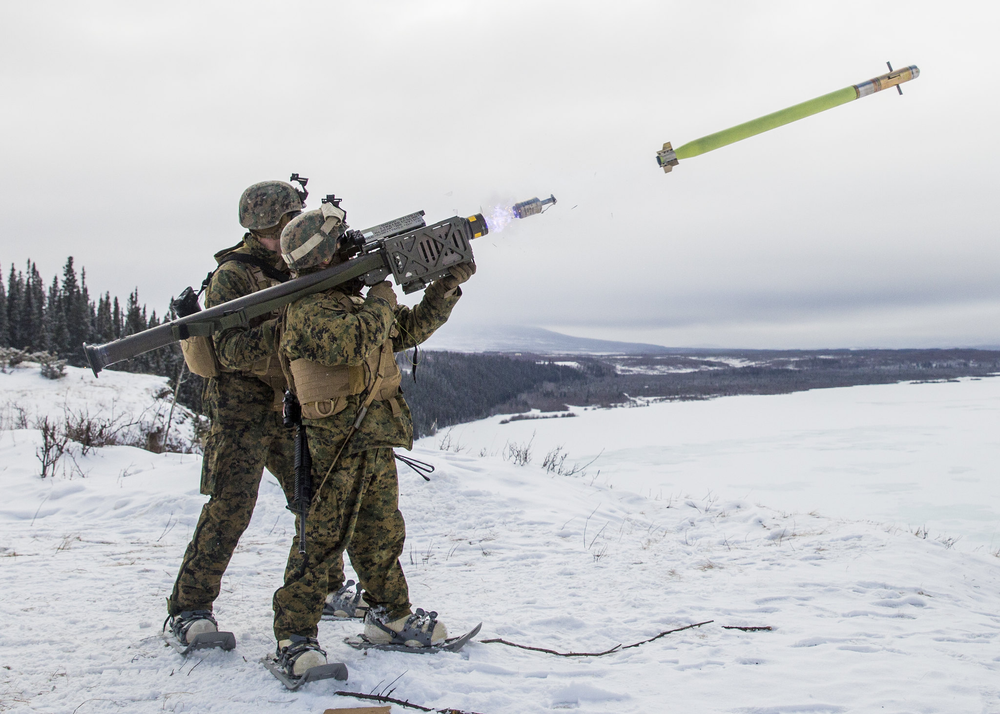 8 Mar 2022 – In the wake of Russia’s invasion of Ukraine, the country has been flooded with weapons and military hardware from Europe and North America.

An exclusive report published on March 5 by the Washington Post quoted anonymous sources, who claimed the U.S. and its overseas allies were “quietly” prepared to support a Ukrainian government-in-exile. This expatriated administration would “direct guerrilla operations against Russian occupiers” over the course of a “long insurgency” following Moscow’s takeover of Kiev.

While opposed to the establishment of a no-fly zone, the U.S. increasingly appears to be directly involved in the conflict against nuclear-armed Russia, which would make U.S. forces legitimate military targets or “co-combatants.”

As Russia presses on with their military operation, Western countries are increasingly determined to fuel a counter-offensive in Kiev. There is little consideration or concern for the potentially catastrophic blowback that may result for Ukrainians and the world.

The U.S. and its allies could urge Ukraine to enter ceasefire negotiations with Moscow and accept the likelihood that the country cannot become a member of North Atlantic Treaty Organization (NATO) without permanently threatening peace in the region. This would stabilize the global economy to avert a full-blown collapse and prevent the outbreak of another refugee crisis on Europe’s periphery.

Instead, the U.S. and NATO have chosen Ukraine as a staging ground for a proxy war with Russia, creating an environment that has the terrifying potential to result in nuclear catastrophe. Ukrainians, as well as Russians collectively punished by sanctions against their economy, will bear the long-term impacts of this belligerent brinkmanship.

But the strategy will significantly expand the growth prospects for military companies like Raytheon, Lockheed Martin, and Northrop Grumman.

Although the European Union has never supplied lethal aid to any country, Brussels is now providing arms to Kiev worth around $489 million.

Sweden has also broken with their two-century-long commitment to neutrality, by sending missile systems to Kiev. Neighboring Finland, long-averse to foreign entanglements of any kind, also pledged to provide thousands of assault rifles, rocket launchers, and vast quantities of ammunition.

On top of sending weapons to Ukraine, Denmark officially permitted their population to travel to Kiev and deploy as foreign fighters.

Ukrainian officials claimed “around 20,000” foreign volunteers, “mostly” from European countries, are now active in the conflict, as of March 6. President Volodomyr Zelenskyy encouraged more to join them.

From the outset, the Brtish government has taken a leading role in underwriting Ukraine’s war effort. Zelenskyy purportedly views Prime Minister Boris Johnson as his “closest ally,” and the pair have daily phone conversations to coordinate war efforts..

In the lead-up to Russia’s invasion, Johnson met with Lithuanian and Polish leaders to discuss battle plans, deployed specialist British troops to the region, and provided a welter of anti-tank missiles. London also trained 20,000 Ukrainian snipers.

British Foreign Secretary Liz Truss voiced her support for citizens who wish to fight in Ukraine. (Note: The same support has not been shown for Britons, who battled ISIS in Iraq and Syria – several have been prosecuted.)

Support from Britain pales in comparison to the military investment by Washington.

Two days after the invasion, President Joe Biden’s administration approved a $350 million “lethal aid” package for Kiev. Congressional oversight was bypassed to expedite delivery to Kiev. Even prior to the Maidan coup in 2014, Ukraine was a leading recipient of U.S. military aid in Europe and Eurasia.

Funds provided to Ukraine over the past year surpassed $1 billion, and the White House has since asked Congress for an additional $10 billion, with just under half assigned to the Pentagon to ensure U.S. troops in NATO countries can continue to replenish weapons supplies for the Ukrainian military and volunteer forces.

As reported in the New York Times, “the U.S. and NATO have pushed more than 17,000 antitank weapons, including Javelin missiles, over the borders of Poland and Romania, unloading them from giant military cargo planes so they can make the trip by land to Kyiv, the Ukrainian capital, and other major cities.”

Stinger missiles largely came from U.S. stockpiles in Germany, and one Pentagon official described the shipment as the “largest single authorized transfer of arms from U.S. military warehouses to another country.”

Though Ukraine has a right to self-defense, Responsible Statecraft warned, “Flooding weapons into what the Global Organized Crime Index describes as ‘one of the largest arms trafficking markets in Europe’ is a recipe for disaster.” The index called attention to “Ukraine’s role as a key link in the global arms trade,” which has “grown since conflicts intensified in eastern Ukraine in recent years.”

The dimensions of U.S. intelligence sharing with Ukraine are indistinct. Officials have consistently refused to share precise details of what is being shared, when, and with whom.

Reporting has suggested some sensitive information, which could facilitate decisive strikes on the Russian military, is being withheld due to Washington’s unwillingness to be seen as a direct participant in the conflict. But Moscow has already declared that any country supplying Kiev with equipment such as fighter jets is considered an active participant.

‘Supporting an Insurgency Is in the CIA’s DNA’

While official permission for Americans to volunteer in Ukraine hasn’t been granted, the New York Times along with U.S. state-funded media outlet Voice of America, have reported approvingly on how scores of veterans of U.S. conflicts, such as Iraq, are flocking to Kiev, often bringing with them military equipment.

Under normal circumstances, passengers would not be able to carry such items as baggage.

It seems likely upon arrival at least some veterans will make contact with the large number of “stay-behind” paramilitary units the CIA has since 2015 covertly trained at a secret facility in the southern United States. The facility has taught Ukrainians about the use of “firearms, camouflage techniques, land navigation, tactics like ‘cover and move,’ intelligence, and other areas.”

A former agency official spelled out the purpose of this program bluntly: “the US is training an insurgency” to “kill Russians.”

This program has palpable parallels with “Operation Gladio’,” a clandestine pan-European nexus of NATO, CIA, and MI6-supported fascist guerrilla units, which throughout the Cold War carried out false flag terror attacks, assassinations, and other heinous crimes with impunity for over four decades, as part of a “strategy of tension” to discredit the left, and justify ever-greater security measures.

Among other atrocities, Gladio operatives were responsible for the August 1980 bombing of Bologna train station, which killed 85 people, including a three-year-old child, and wounded over 200. Members of Gladio’s Italian unit were trained on British soil, and the CIA and MI6 provided the explosives used in the massacre.

It also bears similarities to U.S. assistance to the mujahideen before and during the Soviet–Afghan War. In fact, such a comparison was drawn by U.S. lawmaker Adam Smith, chair of the House Armed Services Committee, after legislation to establish a “Ukraine Resistance Fund” was drafted.

Writing in Foreign Affairs the day after the war began, four-decade CIA veteran Douglas London prophesized a “coming” insurrection, very much along Soviet-Afghan lines. (Note: Foreign Affairs is published by the Council on Foreign Relations, a think tank headquartered in New York.)

Acknowledging the far more powerful Russia “can likely seize as much of Ukraine’s territory as it chooses,” it conversely argues a well-financed and armed insurgency with “reliable supply lines, ample reserves of fighters, and sanctuary over the border can sustain itself indefinitely,” and in the process “sap an occupying army’s will to fight, and exhaust political support for the occupation at home.”

“Supporting an insurgency is in the CIA’s DNA,” London wrote. “The CIA’s recent experience in supporting and fighting insurgencies in Afghanistan, Iraq, and Syria prepares it well for opposing Russia’s modern conventional forces,” London added. “The U.S. can help Ukrainian insurgents in hitting targets with the greatest military value and psychological impact.”

Backing the mujahideen is widely venerated by U.S. foreign policy apparatchiks and nostalgically hailed as the decisive blow that destroyed the Soviet Union.

Speaking to MSNBC  on February 28, twice-failed Democratic presidential candidate Hillary Clinton stated this was “the model that people are now looking toward” in respect to Ukraine, as “armed insurgency basically drove the Russians out of Afghanistan.”

“The day that the Soviets officially crossed the border, I wrote to President Carter: We now have the opportunity of giving to the USSR its Vietnam war,” the strategy’s architect Zbigniew Brzezinski bragged in 1998. “For almost 10 years, Moscow had to carry on a war unsupportable by the government, a conflict that brought about the demoralization and finally the breakup of the Soviet empire.”

However, the Afghan fighters’ role in the USSR’s disintegration is considered by many historians—and Melvin Goodman, chief of the CIA’s Office of Soviet Affairs during this period—to be hugely overrated, if not an outright fantasy. What the policy primarily achieved was a wantonly protracted and bloody quagmire, in which thousands of people died needlessly.

The very same horror is likely to play out in Ukraine too. Zelenskyy has armed Ukrainian citizens and circulated instructions for making Molotov cocktails, urging the public to hurl improvised explosives at the invading Russians—potentially putting civilians’ lives at risk by making them military targets.

In one instance, this encouragement purportedly resulted in a battery of BM21 Grad MLRS inadvertently detonating and devastating the surrounding area. In another, a Ukrainian woman who flung a Molotov cocktail at a Russian army vehicle from a moving car set herself on fire in the process.

Add to this incendiary mix an influx of foreign fighters, one of whom told NPR of their desire to “hang from lamps as many Muscovites as I can,” and Ukrainian authorities releasing inmates with military experience from prison to fight invasion forces.

In sum, the country has been transformed into a veritable tinderbox, primed to explode in a gruesome manner.

When civil war erupted in Tripoli in 2011, London offered an “open door” to Libyan exiles residing in the country – including members of MI6-connected Al Qaeda-affiliate Libyan Islamic Fighting Group. These fighters proved pivotal in the brutal overthrow of Muammar Gaddafi, and remained in Libya for years thereafter.

In 2014, several were rescued by a Royal Navy vessel due to a “deteriorating security situation.”

Among the evacuees was Salman Abedi, who in May 2017 perpetrated a suicide bombing in Manchester Arena, killing 22, injuring over a thousand, and leaving hundreds suffering from psychological trauma.

The EU estimates that up to seven million refugees will be created by the war in Ukraine. That number likely does not account for a future where an insurgency turns the war into a “ten year event.”

The world can expect some who flee and take up refuge in Western countries will be battle-hardened and embittered former guerrilla fighters, like Abedi.

Clearly, Western countries are averse to learning the lessons that should be learned from previous protracted wars. No matter the global consequences, London and Washington will fight to the last Ukrainian.