Reporting from Moscow: Sanctions May Achieve the Opposite of Biden’s Stated Long-Term Goals

In Russia, sanctions have taken a bite out of the Russian economy, but interviews and data suggest they cannot fulfill the West’s strategic motives for imposing them. 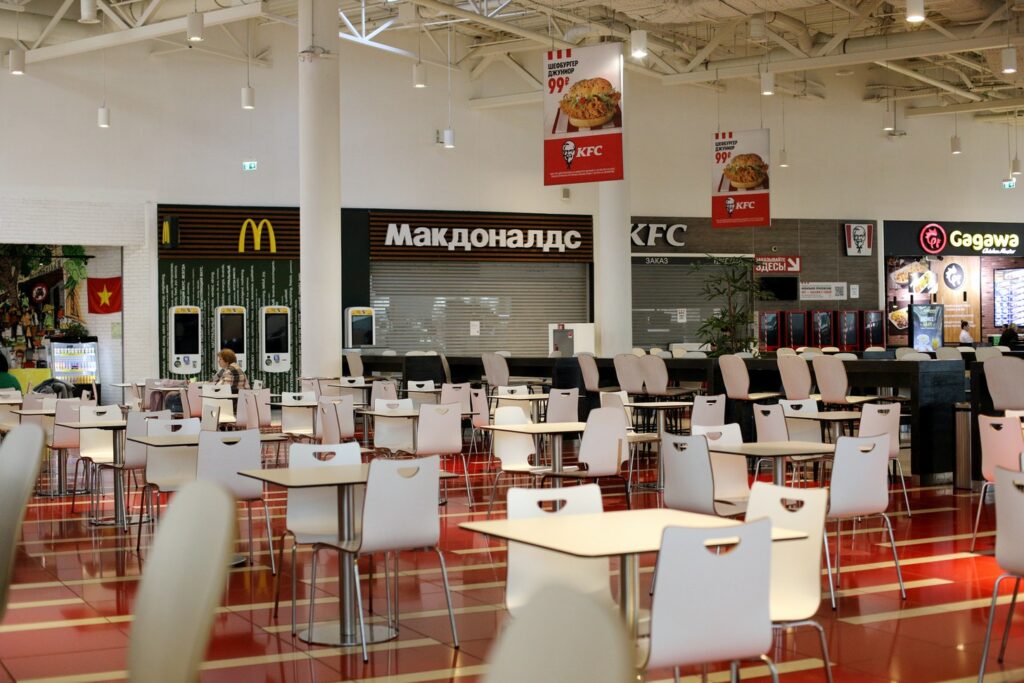 18 March 2022, Moscow, Russia: The logo of the closed McDonald’s restaurant in the Aviapark shopping center. (Photo by —/via Getty Images)

NOTE FROM GLENN GREENWALD: As is true with all of the Outside Voices freelance articles that we publish here, we edit and fact-check the content to ensure factual accuracy, but our publication of an article or op-ed does not necessarily mean we agree with all or even any of the views expressed by the writer, who is guaranteed editorial freedom here. The objective of our Outside Voices page is to provide a platform for high-quality reporting and analysis that is lacking within the gates of corporate journalism, and to ensure that well-informed, independent reporters and commentators have a platform to be heard.

27 Mar 2022 – During a visit to Brussels for the NATO summit on Thursday, President Joe Biden unveiled his latest Russia sanctions package. Biden told reporters that the U.S. and the European Union had agreed to sanction more than 300 Russian lawmakers and oligarchs, as well as several Russian defense companies.

Over the past month, Russia has overtaken both Iran and North Korea to become the most sanctioned country in the world. Some of the measures adopted by the U.S. and its European allies include the freezing nearly half of the Russian central bank’s $640 billion financial reserves, expelling several of Russia’s largest banks from the SWIFT global payment system, imposing export controls aimed at limiting Russia’s access to advanced technologies, closing down their airspace and ports to Russian planes and ships, and instituting personal sanctions against senior Russian officials and high-profile tycoons.

Multinational corporations have joined Western governments in cutting economic ties with Russia. Since the start of the Kremlin’s military campaign in Ukraine on February 24, more than 450 companies ranging from Apple to McDonalds have shut down their operations in Russia, according to a database compiled by Yale University’s Chief Executive Leadership Institute.

But what exactly are the goals of the new sanctions regime against Moscow? Biden has stated that its primary objectives are “to impose severe costs on the Russian economy, both immediately and over time” and to turn Russian President Vladimir Putin into a “pariah on the international stage.” The New York Times has reported, citing current and former U.S. officials, that another aim is to “create domestic pressure on Putin to halt his war in Ukraine.”

So far, Western sanctions have succeeded in delivering a serious blow to the Russian economy. The Russian ruble has lost almost 30% of its value against the dollar since February 24, a development which has caused prices on imported goods to skyrocket. Further exacerbating Russia’s inflation problem is a wave of panic buying in major cities across the country, with shoppers seeking to stock up on essentials ranging from basic food products to medicines. At the same time, Russian lawmakers have estimated that nearly 96,000 workers have been put on leave following the mass exodus of Western corporations.

Despite these economic costs, however, there is so far little sign that Western sanctions are changing Putin’s political calculus on Ukraine. If anything, there are some reasons to believe that growing sanctions pressure could encourage the Russian president to harden his stance.

Fyodor Lukyanov, chairman of the Council of Foreign and Defense Policy, a research group that advises the Russian government, explained to this page that the high costs inflicted on the Russian economy by Western sanctions have put significant pressure on Moscow to compensate for them with military successes. Consequently, the Kremlin could very well respond to increased sanctions pressure by doubling down on its military operation in Ukraine instead of seeking a diplomatic way out.

“If the West continues to impose new sanctions, then Russia will have no other option but to also raise the stakes because there is no room for retreat,” Lukyanov said. “There is no option in the current situation that would allow us to smoothly take a step back without suffering catastrophic political consequences.”

A similar argument was made by Dmitry Suslov, a professor of international relations at National Research University Higher School of Economics, one of Russia’s most elite universities. Suslov told us that there was currently a divide within the Russian political establishment between supporters of a diplomatic settlement with Ukraine and hawkish elements who want to continue fighting until the Russian military succeeds in bringing about “regime change” in Kyiv.

“Western sanctions right now are the central question,” he explained. “If the West makes it clear that sanctions will at least be partially removed once the military operation comes to an end, then the compromise faction will be strengthened. However, if Moscow gets the sense that the West is waging ‘total economic war’ against Russia, then Putin will have little incentive to not go all the way.”

Much of the Kremlin’s response to sanctions so far has centered on mitigating the damage to the Russian economy rather than hitting back at the West. For example, the Russian central bank has sought to keep the value of the ruble from sliding by hiking up its key interest rate to 20% and limiting foreign currency exchanges.

Yet both Lukyanov and Suslov predicted that Moscow could introduce its own export controls if tensions with the West continue to escalate. Although Russia’s economy ($1.65 trillion) is much smaller than that of the U.S. ($22.9 trillion) and the European Union ($17.1 trillion), Moscow is a major global supplier of key commodities such as oil, natural gas, grains, timber, and rare earth metals used in the production of computer chips, electric vehicles, and airplanes.

To be sure, such a move would also significantly damage the Russian economy by depriving it of much needed revenue, but Lukyanov and Suslov suggested that it’s a price the Kremlin may be willing to pay if it concludes that the West will maintain its sanctions against Russia indefinitely.

What about the impact of sanctions on Russian public opinion? It is difficult to fully assess since the Kremlin has tightly regulated domestic media coverage of the conflict in Ukraine, detained thousands of anti-war protestors, and even introduced new legislation that threatens jail time for those who spread “fake news” about the Russian military. Under such circumstances, many critics of the government’s actions in Ukraine will understandably choose to remain silent.

Dimitri Simes Jr. – I’m a Moscow-based journalist whose reporting on Russia, Ukraine, and Belarus has been published in The Financial Times, Nikkei Asia, Yahoo News, South China Morning Post, and The National Interest among others.