The Dangerous Assumption That Violence Keeps Us Safe

26 Feb 2022 – A romanticized belief in violence renders people irrational to the point of hurting ourselves, over and over again. 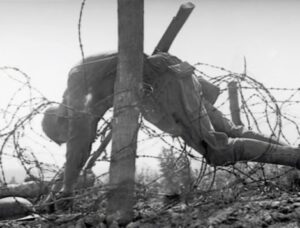 One of the most popular — and dangerous — assumptions in the world is that violence keeps us safe.

I live in the United States, a country where the more guns we have, the less safe we are. That helps me to notice irrational assumptions that prevent creative thought.

The Danish government — knowing as certainly as the Norwegians that they would be defeated militarily — decided not to fight. As a result, they were able to minimize their losses compared with the Norwegians, politically and economically, as well as the immediate suffering of their people.

The flame of liberty continued to burn bright in both countries under occupation. Along with an underground movement that included violence, nonviolent struggles on multiple fronts broke out that did both countries proud. The Danes saved most of their Jews from the Holocaust; the Norwegians saved the integrity of their education system and the state church.

Both the Danes and the Norwegians faced overwhelming military might. The Danes chose not to use their army and relied largely on nonviolent struggle instead. The Norwegians used their military, paid a high price for it and then turned largely to nonviolent struggle. In both cases, the nonviolence — unprepared, with improvised strategy and no training — delivered victories that sustained the integrity of their countries.

Many Ukrainians are open to nonviolent defense

There is a remarkable study of the views of Ukrainians themselves on the chances of nonviolent defense and whether they would take part in armed or nonviolent resistance in response to a foreign armed invasion. Perhaps because of their remarkable success in nonviolently toppling their own dictatorship, a surprising proportion do not assume that violence is their only option.

As Maciej Bartkowski, a senior advisor to the International Center on Nonviolent Conflict, describes the findings, “Clear majorities chose various nonviolent resistance methods — ranging from symbolic to disruptive to constructive resistance actions against an occupier — rather than violent insurgent actions.”

I am not arguing that the threat or use of violence never achieves a positive result. In this short article I’m setting aside the larger philosophical discussion while recommending Aldous Huxley’s remarkable book “Ends and Means” to readers who want to delve more deeply. My point here is that a compelling belief in violence renders people irrational to the point of hurting ourselves, over and over again.

One way we’re hurt is diminished creativity. Why isn’t it automatic, when someone proposes violence, that others say “Let’s investigate and see if there’s a nonviolent way to get that done?”

In my own life I’ve been faced with violence many times. I’ve been surrounded on a street late at night by a hostile gang, I’ve had a knife pulled on me three times, I’ve faced down a gun that was pulled on someone else, and I’ve been a nonviolent bodyguard for human rights activists threatened by hit squads.

I can’t know for sure the outcome of nonviolent or violent means ahead of time, but I can judge the ethical nature of the means itself.

I’m big and strong, and a while back I was young. I’ve realized that in threatening situations, as well as the larger confrontations we get into with direct action, there is a chance that I might have gained tactical victories with violence. I also knew there was a chance that I could have won with nonviolence. I’ve believed the odds are better with nonviolence, and there’s lots of evidence on my side, but who knows for sure in any given situation?

Since we can’t know for sure, it leaves the question of how to decide. This could be challenging for us as individuals, as well as for political leaders, be they Norwegian, Danish or Ukrainian. It’s no help to have a violence-loving culture pushing me with its automatic answer. To be responsible, I need to make a real choice.

If I have time, I can do the creative thing and research possible violent and nonviolent options. That could help a lot, and it’s the least we can demand of governments making decisions for its citizens. Still, developing creative options is unlikely to seal the deal because the situation before us is always unique, and predicting results is therefore a tricky matter.

I have found a solid basis for decision. I can’t know for sure the outcome of nonviolent or violent means ahead of time, but I can judge the ethical nature of the means itself. There is a clear ethical difference between violent and nonviolent means of struggle. On that basis, I can choose, and throw myself fully into that choice. At age 84, I have no regrets.

Editor’s note: The reference to the study on Ukrainians’ views on nonviolent resistance was added to the story after its initial publication.

George Lakey has been active in direct action campaigns for over six decades. Recently retired from Swarthmore College, he was first arrested in the civil rights movement and most recently in the climate justice movement. He has facilitated 1,500 workshops on five continents and led activist projects on local, national and international levels. His 10 books and many articles reflect his social research into change on community and societal levels. His newest books are Viking Economics: How the Scandinavians Got It Right and How We Can, Too (2016), and How We Win: A Guide to Nonviolent Direct Action Campaigning (2018).