“No war has the honesty of confessing, ‘I kill to steal.’”  — Eduardo Galeano 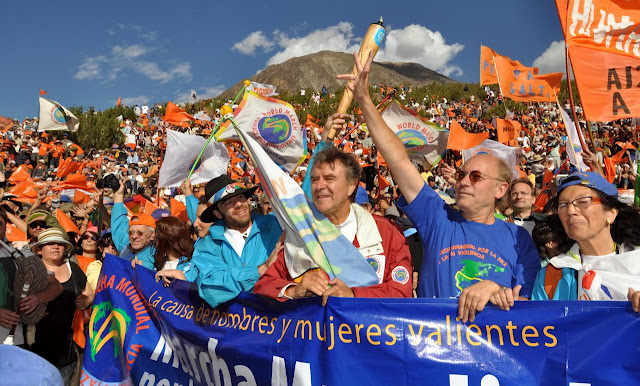 And just in case, if so many lies are not enough… the mass media are ready to invent imaginary enemies to justify the conversion of the world into a great madhouse and an immense slaughterhouse.

In King Lear, Shakespeare had written that “…in this world, the mad lead the blind…”. And… four centuries afterward, the masters of the world are madmen in love with death. They have turned the world into a place where every minute 10 children die of hunger or curable disease and every minute 3 million dollars are spent, 3 million dollars per minute on the military industry, which is a factory of death.

One wonders: How long will the peace of the world be in the hands of those who make the business of war? How long will we continue to believe that we were born for mutual extermination and that mutual extermination is our destiny? How long? If the world, this world deserves to be another world… The march for peace, the march of October 2nd deserves millions and millions of feet.

Eduardo Galeano’s endorsement of the World March for Peace and Nonviolence:

World Without Wars and Without Violence (MSGySV) was the humanist organisation that promoted the 1st WMW in 2009, the 2nd WMW in 2019 and is preparing the 3rd WMW for 2024.

Eduardo Galeano was one of Latin America’s most distinguished writers.  He was the author of many books, including the three-volume Memory of Fire, Open Veins of Latin America, Soccer in Sun and Shadow, and The Book of Embraces.  Born in Montevideo, Uruguay in 1940, he lived in exile in Argentina and Spain for 12 years before returning to Uruguay in 1985, where he spent the rest of his life. Galeano died in 2015.