The industry moved quickly to capture the narrative, going from disinformation blitz to policy wins within a matter of weeks. 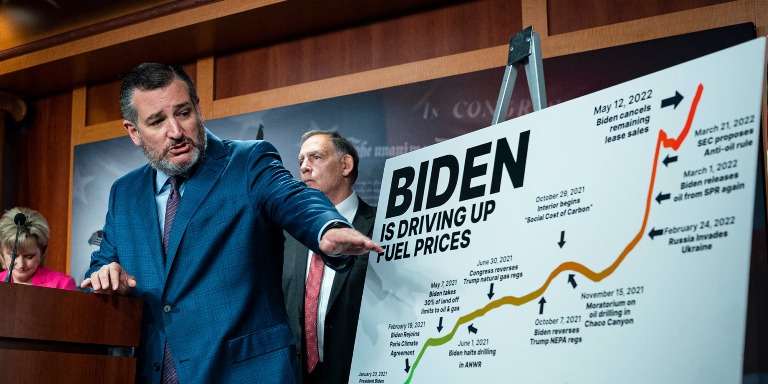 Texas Sen. Ted Cruz speaks during a news conference on gasoline prices at the Capitol in Washington, D.C., on May 18, 2022. Photo: Al Drago/Bloomberg via Getty Images

25 May 2022 – Back in late 2021, as Russian President Vladimir Putin began mobilizing troops at the Ukraine border, the fossil fuel industry got its foot soldiers ready too. With the threat of Russian aggression and subsequent sanctions looming, gas prices were on the rise, and the fossil fuel industry wanted the public to know that there was only one culprit: climate policy.

“There are a lot of factors at play as to why energy prices are surging,” Mike Sommers, president of the American Petroleum Institute, or API, told CNBC at the time. “But certainly one of the key factors is that the Biden administration has made an effort to reduce production in the United States. One of their first acts, for example, was cutting off the Keystone XL pipeline. One of their second acts was cutting up leasing and permitting on federal lands, and then they cut off access to ANWR,” referring to the Arctic National Wildlife Refuge in Alaska.

He gave roughly the same interview every week for months. On March 7, two weeks after the invasion of Ukraine, he repeated it again, telling a CBS reporter, “You know, first they cut off the Keystone XL pipeline. Then they put a moratorium on leasing and permitting on federal lands and on offshore waters. And then they cut off supply from the Alaska natural national wildlife refuge.”

That’s some consistent messaging! For the record, about 25 percent of fossil fuel drilling happens on public lands; the rest is entirely controlled by private companies. The fossil fuel industry is sitting on at least a decade’s worth of unused leases, so it’s unlikely that a lack of new leases has impacted current production or supply.

The Keystone XL pipeline was intended to transport tar sands oil from Canada to export terminals in the Gulf of Mexico, where two-thirds of it was earmarked for non-U.S. customers. It was nowhere near functional when it was canceled: About 8 percent of the pipeline had been built, and TC Energy, the company behind the project, still needed to find $6.9 billion of the $8 billion construction cost to finish it.

As for the Arctic National Wildlife Refuge, the holy grail for U.S. oil companies, it has been off-limits to oil drilling since 1977. For a brief moment in 2017, the Trump administration reversed that, but no major oil companies — no API members — even bid on leases. These are the only pieces of climate policy Sommers continuously referred to because they’re the only ones the Biden administration has actually managed to pass, but none of them have had any impact on the current supply of domestic oil and gas in the United States or the price at the pump.

But the facts don’t matter if you’re the first one to frame a story and you repeat it often enough. A new report out this week shows that consistent messaging, coordinated messengers, and a massive advertising blitz combined to deliver major policy wins to the fossil fuel industry as early as two weeks from the start of Russia’s invasion of Ukraine.

“On February 24, within hours of Putin’s invasion, I was just watching these serious patterns emerge,” said Christina Arena, a public relations and climate disinformation expert. Arena worked for the PR firm Edelman when it handled the API account, so she knows a campaign when she sees one. “API and other trade associations were echoing similar talking points immediately, anti-Biden talking points, anti-renewable energy talking points.” That kind of consistency and media training takes months, not days, to prep, she said.

That prompted Arena to reach out to InfluenceMap, a think tank that tracks the influence of corporate lobbying on climate policy. InfluenceMap teamed up with Media Matters for America and Triplecheck to look into what various fossil fuel interests were saying about Russia-Ukraine and how those messages were being amplified. The organizations’ resulting report pinpoints the top messages and messengers, and how they map to big policy wins.

Some of the findings are to be expected. API went big, as did Chevron, ConocoPhillips, and the U.S. Chamber of Commerce. The usual suspects amplified the industry’s messaging: Breitbart News, Fox News, conservative commentator Ben Shapiro, Texas Sen. Ted Cruz, Texas Gov. Greg Abbott, and Tennessee Sen. Marsha Blackburn. All told, API placed 651 Facebook ads from the end of January to April 1, reaching more than 19 million people. On February 24, the day of the invasion, API and its network got busy. “There’s a huge peak where we get to 100 fossil fuel misinformation posts that yielded over 5 million likes, comments, and shares,” Arena noted.

“I think you could call it a disinformation-driven heist of public policy.”

But there are some less expected findings too. After battling gas bans for two years, the gas side of the industry seems to have fully embraced the fact that the climate movement doesn’t see it as its friend anymore. Gas entities that joined the party include the American Gas Association (a trade group for gas utilities), Hess Corp., and Sempra Infrastructure.

The types of messages were also a surprise. After a decade or so of greenwashing, the fossil fuel industry is going full culture war. The report finds three key messages across hundreds of social media posts and media appearances: American fossil fuel production ensures freedom and national security; high gas prices are caused by climate policy, and the solution is more drilling; and climate change is something only liberal “woke” elites care about.

There’s also a push to convince people that some kind of Green New Deal-adjacent policy is in place and that is what’s driving up gas prices. “I think you could call it a disinformation-driven heist of public policy,” Arena said.

And there’s the timeline, and the dividends this campaign has paid to the industry. By mid-March, the Energy Department was starting to grant permits to increase the volume at some liquid natural gas export terminals. “So that’s two weeks maybe from the start of the crisis,” said Faye Holder, the lead author of the InfluenceMap report. “We’ve seen a heavy, heavy use of social media, both in advertising and organic content. And then they’re feeding off of media too. A lot of the things that are retweeted by API, for instance, are Mike Sommers on Fox News.”

By March 25, Biden was announcing a U.S.-European Union liquefied natural gas deal that the Trump administration had tried and failed to get done: 15 billion cubic meters in 2022, with a standing order for 50 billion cubic meters a year until 2030. “That’s just a little over four weeks. That’s a very short interval,” Arena said. “And I feel that interval should alarm lawmakers. It should alarm people in the climate community. That’s disaster capitalism.”