4 May 2022 – We can date the beginning of the war in Ukraine to October 2002, the date that a document published by U.S. oligarchs, the Project for the New American Century (PNAC) for the Pentagon, clearly and unambiguously stated U.S. foreign policy for the 21st century “Full Spectrum Dominance” declared by the Pentagon to rule the world. That is, to dominate (militarily of course) the nations, peoples and resources of the entire world. Not “Full Spectrum” or Global Peace, Diplomacy or Cooperation, but Domination.

America’s oligarchs, the ruling class, made up of the traditional elites that run the Republican Party and the Democratic Party, came up with this insane, maniacal, harebrained, foolish statement of US foreign policy. The list of those who signed the PNAC letter reads like a Who’s Who of the neoconservative 95% white male elite who helped pave the intellectual path to the Iraq nightmare of a combined civilian and combatant death toll of 1.2 million human beings: Elliott Abrams, Richard L. Armitage, William J. Bennett, Jeffrey Bergner, John Bolton, Paula Dobriansky, Francis Fukuyama, Robert Kagan, Zalmay Khalilzad, William Kristol, Richard Perle, Peter W. Rodman, Donald Rumsfeld, William Schneider, Jr., Vin Weber, Paul Wolfowitz, R. James Woolsey, and Robert B. Zoellick. These insane folk along with their equally dim-witted allies, is determined to take control of all the world, to become the greatest empire in history; and pretend it is the result, exclusively, of white “genius” and “ingenuity” and no one else. The 300 years of the brutal enslavement of African people is of no consequence. 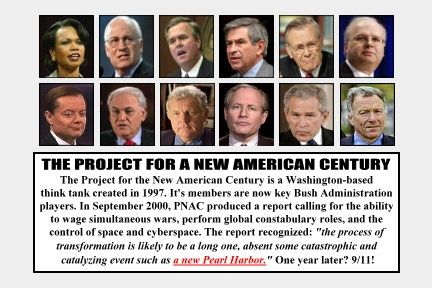 Of course, each and every one of the above mentioned individuals, along with Colin Powell and Condoleezza Rice for window dressing and a bit of color, is responsible for Crimes against Peace. In other words, War Crimes and Crimes Against Humanity. The Judgement of the 1946 International Military Tribunal at Nuremberg states: “To initiate a war of aggression is not only an international crime; it is the supreme international crime.” That is, waging an aggressive war is the original war crime from which all other war crimes spring.  No war, no crimes. North Americans fought to establish the primacy of crimes against the peace in the planning stages for Nuremberg. The planning and execution of the unprovoked war America launched against Iraq in 2003 is a clear example of crimes against peace, crimes against humanity and against International Law: according to Kofi Anan Secretary-General of the UN, at the time.

After the United States has tried everything in its power to malign, ignore and undermine the International Criminal Court since it came into being in 2002, now the U.S. government is pushing for the ICC to prosecute Russian leaders as war criminals for war crimes in Ukraine.  Well, it takes one to know one. Apparently, Washington thinks the ICC is reliable enough to try Russians but not to bring U.S. or Israeli officials to justice.

“Full Spectrum Dominance”!  The promulgation of this PNAC doctrine of U.S. foreign policy is the beginning of the war in Ukraine and the U.S. war on the world.  Preparation for war is a primary cause of war; and no nation spends more time passionately, enthusiastically, intensely making preparations for war than the USA. In January 2014, U.S. military trainers arrived in Ukraine.  In February 2014, Ukrainian President Victor Yanukovych was overthrown in a violent CIA backed coup.  In May of 2019 the clown (literally his resume) Volodymyr Zelensky was elected president of Ukraine after a false promise of peace. Also, in May 2019, the U.S. Rand Corp. think tank issued a manifesto to destroy Russia. Preparation!

The U.S. engages and activates all major institutions in preparing for and starting wars: Religious, Intellectual, Social, Economic, Political Cultural and Media.  Now, due to years of anti-Muslim terror propaganda, anti-Russian and anti-Chinese propaganda, entire populations and nations of the world are regarded as enemies by many U.S. people, seen as vicious, irrational, less-than-human creatures who are undeserving of basic decency, let alone the protection of international law.

Yet, dear reader, can you imagine this PNAC Gaggle of Goons noted above and their predecessors (including Barak Obama, Kamala Harris, Lloyd Austin) handling the next global Covid pandemic? Can you imagine the world, the entire globe under the exclusive incompetent and inept leadership of the USA – with a world leader advocating the drinking of Clorox or shining ultra-violent light into some orifice as solutions to this Covid health pandemic, while disparaging and insulting science and scientists? Have mercy!  This national “leadership” has cost the U.S. over one million lives and counting – the highest in the industrialized world. What do you think such leadership would mean to the world?

“Full Spectrum Dominance” for what?  To provide the world with Healthcare?  Housing? Childcare? Eldercare? Better Schools? Public Transportation? Clean Water? An adequate diet?  The people of Yemen are experiencing a dose of U.S. /Saudi dominance; and there the children are so hungry they are literally eating their hands. This is the meaning of and will be the result of  U.S. domination of the globe. Clearly, at the very least, the U.S. must rethink its foreign policy objectives. 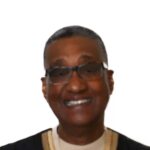 Fritz Pointer is a retired professor of English and African American Studies.  He is the vice president of Democratic World Federalists and has published numerous scholarly articles such as African Oral Epic Poetry: Praising the Deeds of a Mythic Hero (2013).  Being the older brother of the popularly known singing group, The Pointer Sisters, he has co-authored Fairytale: the Pointer Sisters’ Family History. Pointer’s main interests include combating racism, advancing human rights, ending war, eliminating nuclear weapons, and nonviolent solutions to global problems.