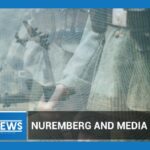 14 Mar 2020 – Journalists were among those prosecuted for War Crimes and Crimes Against Humanity during the Nuremberg Trials post WWII.  The Nuremberg prosecution argued: “By virtue of its functions, the German Press Division (think ABC, NBC, FOX, CNN, NPR, MSNBC, CBS, NY Times, Washington Post) became an important and unique instrument of the Nazi (think Project For the New American Century – PNAC) conspirators, not only in dominating the minds and psychology of Germans, but also as an instrument of foreign policy and psychological warfare against other nations.”