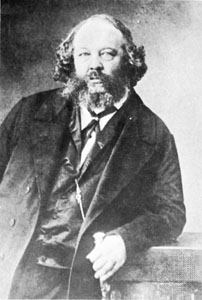 Bakunin was the eldest son of a small landowner in the province of Tver. His lifetime of revolt began when he was sent to the Artillery School in St. Petersburg and later was posted to a military unit on the Polish frontier. In 1835 he absented himself without leave and resigned his commission, an action for which he narrowly escaped arrest for desertion. During the next five years he divided his time between Premukhino, where he plunged into the study of the German philosophers Johann Fichte and Georg Wilhelm Friedrich Hegel, and Moscow, where he moved in the literary circles of the critic Vissarion Grigoryevich Belinsky, the novelist Ivan Turgenev, and the publicist Aleksandr Herzen. In 1840, with his opinions still in a fluid and turbulent state, he journeyed to Berlin to complete his education. There he fell under the spell of the Young Hegelians, the radical followers of Hegel.

After moving to Dresden, Bakunin published his first revolutionary credo in a radical journal in 1842, ending with a now-famous aphorism: “The passion for destruction is also a creative passion.” This brought him a peremptory order to return to Russia and, on his refusal, the loss of his passport. After brief periods in Switzerland and Belgium, Bakunin settled in Paris, where he consorted with French and German Socialists, including Pierre-Joseph Proudhon and Karl Marx, and numerous Polish émigrés who inspired him to combine the cause of the national liberation of the Slav peoples with that of social revolution.

The February Revolution of 1848 in Paris gave him his first taste of street fighting, and after a few days of eager participation he traveled eastward in the hope of fanning the flames of revolution in Germany and Poland. In Prague in June 1848, he attended the Slav congress, which ended when Austrian troops bombarded the city. Later that year, in the secure retreat of Anhalt-Köthen in Germany, he wrote his first major manifesto, An Appeal to the Slavs, in which he denounced the bourgeoisie as a spent counterrevolutionary force, called for the overthrow of the Habsburg Empire and the creation in central Europe of a free federation of Slav peoples, and counted on the peasant—especially the Russian peasant—with his tradition of violent revolt, as the agent of the coming revolution.

Tired of inaction, Bakunin once more plunged into revolutionary intrigues and, engaging in the Dresden insurrection of May 1849, was arrested. The Saxon authorities turned him over to Austria, where he was incarcerated and then transferred to Russia. There, in May 1851, he was back on Russian soil in the Peter-Paul Fortress in St. Petersburg. At the invitation of the chief of police he wrote an enigmatic Confession, which was not published until 1921. It consisted of expressions of repentance for misdeeds and abject appeals for mercy but also included some gestures of defiance, playing heavily on Bakunin’s devotion to the Slavs and hatred of the Germans—sentiments that were noted with interest and approval by the tsar.

Nevertheless, the work did not win Bakunin’s release, and he remained in the Peter-Paul Fortress for three years and in another fortress, the Schlisselburg, for three additional years, during which time his health deteriorated rapidly. In 1857 he was released to live in Siberia, where he contracted a marriage, which was not consummated, with the daughter of a Polish merchant. The governor of Eastern Siberia was a cousin of Bakunin’s mother, and it was probably through this connection that he obtained permission in 1861 to travel down the Amur, ostensibly on commercial business. Having reached the coast in a Russian ship, he transferred to an American vessel bound for Japan and traveled via the United States to Great Britain. 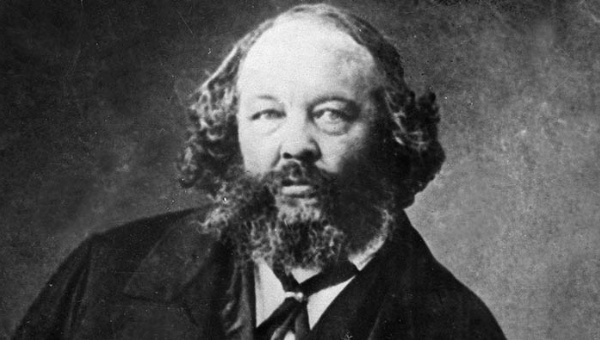 Bakunin’s arrival in London at the end of 1861 reunited him with Herzen, whom he had last seen in Paris in 1847 and who now occupied a preeminent position among Russian émigrés as editor of Kolokol (“The Bell”). Bakunin’s 14-month stay in London led to an irreparable rift with Herzen, who had shed some of the revolutionary ardour of his youth and had already crossed swords with the critic and novelist Nikolay Chernyshevsky and other extreme radicals of the rising Russian generation. Herzen now found Bakunin’s financial and political irresponsibility difficult to bear.

When the Polish insurrection broke out early in 1863, Bakunin eagerly embarked with a shipload of Polish volunteers for the Baltic, though he got only as far as Sweden. At the beginning of 1864 he established himself in Italy, which became his residence for four years. While in Italy he framed the main outlines of the anarchist creed that he preached with unsystematic but unremitting vigour for the rest of his life. It was there, too, that he began to weave a complex network—part real, part fictitious—of interlocking secret revolutionary societies that absorbed his energies and bewildered the followers whom he enrolled in them.

Two of Bakunin’s major writings, L’Empire knouto-germanique et la révolution sociale (1871; “The Knouto-Germanic Empire and the Social Revolution”) and Statism and Anarchy (1873), directly reflected his conflict with Marx. Bakunin was as uncompromising a revolutionary as Marx and never ceased to preach the overthrow of the existing order by violent means, but he rejected political control, centralization, and subordination to authority (while making an unconscious exception of his own authority within the movement). He denounced what he regarded as characteristically Germanic ways of thought and organization and championed instead the untutored spirit of revolt that he found embodied in the Russian peasant.

Bakunin’s anarchism took final shape as the antithesis of Marx’s communism. Both personally and theoretically, Bakunin threatened all Marxists. His belief that the first act of a revolutionary movement must be the abolition of the state appealed to rank-and-file revolutionaries, and his criticism of Marx’s readiness to maintain the state until socialism was achieved—until the state led to a bureaucratic tyranny that in turn would spur revolutionary change—proved all too prescient.