Recasting Attention to the Raging Genocide

19 May 2022 – Palestinian-American journalist Shireen Abu Akleh was a leading media voice since the intifada or uprising in Palestine in 2000.

But on May 11 her voice was silenced for ever when she was shot and killed while reporting on an Israeli raid on a Palestinian house on the West Bank city of Jenin.

Much sorrow has been expressed around the world about her killing. We, the members of the International Movement for a Just World (JUST), in solidarity with the global outcry against her assassination, wish to add our condemnation of her cold-blooded execution. To be silent would amount to complicity with the atrocity of her killing and the degrading and inhuman treatment meted to her in death by the belligerent behaviour of the Israeli forces at her funeral. As the casket was being carried to the Christian cemetery, Israeli police attacked the mourners with batons and stun grenades almost causing the pallbearers to drop the coffin! 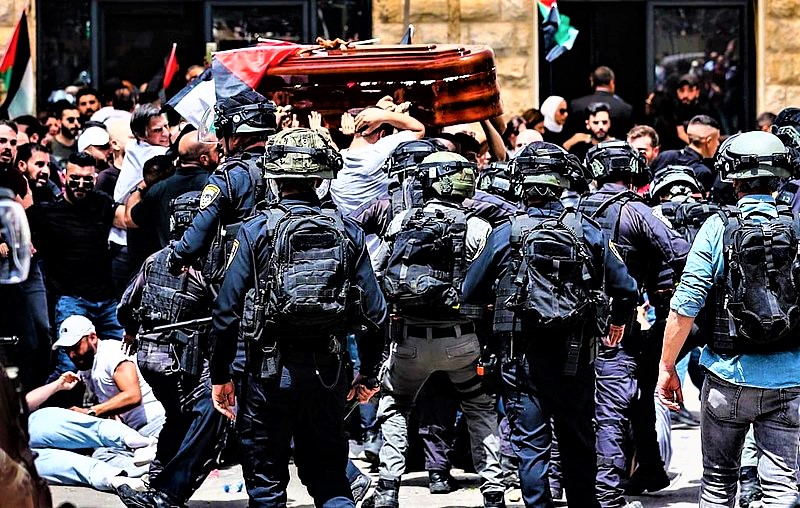 The Israeli Defence Force in “wolf pack formation” attacks the pallbearers carrying the coffin, during the funeral of Assassinated Journalist, Shireen Abu Akleh, with no respect for the dignity of the Dead.

For such targeted and senseless killings to cease, a high-level independent and international investigation is called for. Besides the atrocity of Shireen’s killing, the wider aggression against Palestinian journalists must be investigated. It is noteworthy that the International Federation of Journalists filed a complaint against the State of Israel with the International Criminal Court (the ICC) in April.  One also notes that Shireen’s targeted killing follows the fourth anniversary of the death of Palestinian journalist Ahmed Abu Hussein who also fell victim to an Israeli sniper while covering the “Great March of Return” in March 2018.

A bleak reminder of this type of systematic aggression against journalists is recanted by Reporters without Borders which registers the number of journalists who have been killed while covering the plight of the Palestinians.  The number of killings is more than 40 since 2000. This is despite the protection afforded to journalists by international humanitarian law.

We note with sorrow that though a multitude of international organisations have voiced condemnation over Shireen’s killing, there is deafening silence from certain states that preach human rights to the rest of the world. 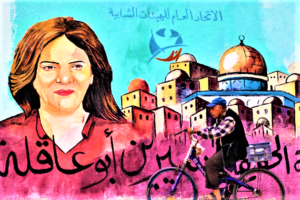 Ms Shireen Abu Akleh as depicted in the giant mural, painted by a Palestinian artist, was an inspiration for a generation of Palestinian women journalists [Mohammed Abed/AFP]

We wish to stand in solidarity with the family, friends, colleagues and the people to whom Shireen Abu Akleh gave her voice. We are adding our small voice to a larger call for justice.

We wish to reiterate that though the global attention these days is focused on the Russia-Ukraine war, the world needs to recast its attention and conscience to the genocide, protracted aggression and injustices in the illegally occupied territories of the West Bank. Shireen’s assassination underlies the daily reality of apartheid in occupied Palestine, the systemic violence against innocent civilians, and Israel’s aggression against anyone reporting these crimes. Preventing the media from conducting its duty is one of the messages behind this atrocity.

Prof Dr Shad Saleem Faruqi is vice president of the International Movement for a Just World.

Dr Jaspal Kaur Sadhu Singh is asst. secretary-general of the International Movement for a Just World.

This article originally appeared on Transcend Media Service (TMS) on 23 May 2022.

Anticopyright: Editorials and articles originated on TMS may be freely reprinted, disseminated, translated and used as background material, provided an acknowledgement and link to the source, TMS: Recasting Attention to the Raging Genocide, is included. Thank you.