Time is too short to reinvent the wheel if we want to win. Movements must take seriously how they train and strategize. 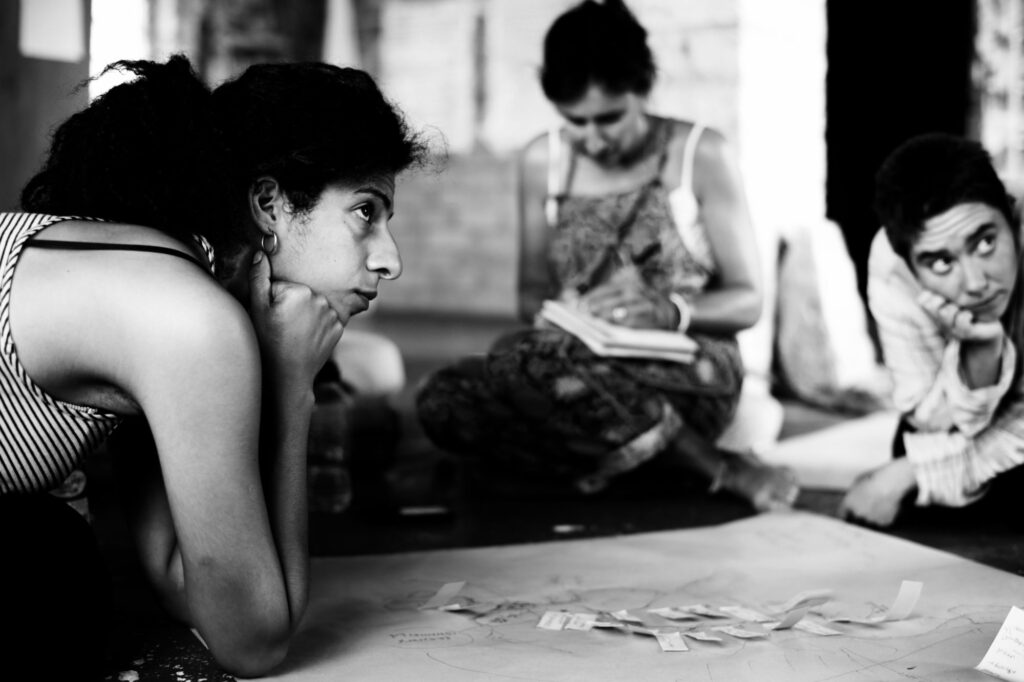 17 May 2022 – When we’re up against the state or powerful corporations, patriarchal or racial structures, we can’t take success or even survival for granted. What we do and how — our strategy and tactics, our understanding and skill — matters for the outcome. The stakes are high, and the cost of defeat is severe. This makes movement learning an ethical, as well as a practical, necessity.

Reinventing the wheel — only learning when we and our movements go through something ourselves — is a recipe for intensified and prolonged suffering. Meanwhile, a “Do something, anything” mentality is often justified by a macho celebration of action for its own sake, a preference for drama over results, or even our own past suffering. After all, if other people have successfully oppressed and exploited us for a long time, we have the moral high ground of having suffered, resisted and survived. But knowing how to suffer and survive is not the same as knowing how to overcome, “some day.”

Movements that take seriously the suffering they are already responding to typically seek to learn as much as they can from the experience of movements in other times and places. If we had enough time, and did not have to care about the cost, we could work out everything for ourselves, at whatever cost to our own lives and to those we love. Yet, there is something to be said for trying to shorten the time of learning and to make some of our learning less brutally hard won.

But how do we learn, and who can we learn from?

The “how” is in some ways simpler: as movements develop, as they endure and mature, they often go through a process of becoming not just collective actors, but actors who learn.

This often goes hand in hand with democratization. Generally, organizations whose internal discussions are only focused on raising outrage about injustice and highlighting the urgency of the next action — without discussing what that action should be and if we are getting anywhere — tend to be autocratic organizations. Someone (a charismatic leader or a small in-group) is doing the thinking about what to do next, but keeping the wider movement out of that discussion.

For this reason, authoritarian groups — be they founder-led charities, bureaucracies or circles of magical thinking — often leave their participants as they found them. When the vision of change they have sold participants fails to materialize, people often fall back into inaction and write off all activism as pointless, imagining that any other group would be just as bad as what they have experienced. Other times, they fall into conspiracy theories, far-right thinking and other ways of reproducing the same failure to learn.

Conversely, democratic movements mean lively internal discussions about strategy and tactics, with effective training and education programs that go beyond teaching a single magic method by numbers, instead engaging in real debate with other movements and oppressed communities. Being better at learning and being more democratic are two sides of the same coin. Internal democracy is not just a question of formal rules; it is also about a movement whose participants feel able to think and decide together.

Previous Coverage: A radical land occupation in Brazil shows how to reimagine our societies for the better

Genuinely democratic and large-scale movements and uprisings — the U.S. civil rights movement, the Zapatistas, Brazil’s Landless People’s Movement or the movements of 1968 — are necessarily also powerful learning spaces. This is because they bring together so many different kinds of people from so many different communities and places, who then have to agree on what to do together. This agreement can’t happen without a lot of deep listening and reflection on each other’s experiences and struggles — whether or not the words “education” and “learning” are ever spoken.

The shapes and spaces of movement learning vary hugely: the Highlander Folk School or a library of social change resources, the 19th century poor reading a radical paper together, Latin American popular education spaces, the teach-in during an occupation or the activist gathering. As official education has become more widespread and longer-lasting, movements have less need to emphasize some kinds of learning, and more need to distinguish themselves from schools that many people experience as spaces of oppression. But the need to think and learn together as part of the struggle to change the world has not gone away.

Who can we learn from, though? Where does the knowledge we need to change the world live? Activist educators give three kinds of answers to this. The first and most important is associated with the names of Italian anti-fascist organizer Antonio Gramsci and Brazilian popular educator Paulo Freire: It is to try and learn from our own experience, as activists and as members of exploited and oppressed communities.

Gramsci talks about “common sense” — the odd mix of ideas that most people bring to movements and reinforced by school and media, church and family. This often naturalizes injustice, denies that the problems we face are real or systemic, and tells us that we can solve them by working within the system and using approved channels. The alternative is to pay more attention to our practical “good sense,” which is already expressed in how we survive and resist, cope and struggle. Collectively, in spaces we create for the purpose of liberation, we can express and discuss this more, acting from a better understanding of what we already, at some level, know.

A second kind of answer is collaboration and conversation between activists and scholars. Historians of the movements of the past, researchers into other movements and the struggles of other places and communities, can make their experience and learning come alive for our own movement, here and now.

There are many different forms this kind of collaboration can take. In my own three decades as an activist social movements researcher, I have run many workshops and courses in activist spaces drawing on academic research as well as other movements; I have written books, articles, blogs and so on in radical spaces; and I have mentored activists doing research on their own organization’s practice.

Whatever the format, the most important thing is for it to fit into movements’ own thinking and learning processes, not into academic agendas — for example, running a short workshop on movement building as part of an oppressed group’s discussions towards a community charter.

Beyond these two answers, perhaps the most powerful tool is what I call “learning from each other’s struggles.” This involves encounters between activist peers, meeting people from other movements and talking about shared and different challenges. We articulate what we do ourselves and understand our own situation more clearly — while listening closely to the experience of struggle that someone else has gained at great cost, so we do not have to go through all of that cost ourselves.

What does all of this look like in practice? Right now, a pan-European alliance of activist training groups and academics is working on a project to deepen strategic thinking and the capacity for alliance-making between social movements across many different countries.

The Ulex Project in Catalunya works with radical movements across Europe — particularly through its two-week residential training “Ecology of Social Movements,” which helps activists think about where their organization stands within its movement and how their movement relates to others.

Meanwhile, the European Community Organizing Network in Slovakia works with disadvantaged grassroots groups that are self-organizing from scratch — particularly, but not only, in East and Central Europe. They co-run an annual Citizen Participation University in Hungary that brings together community organizers and activists to learn from each other’s experiences.

Based in Paris, Berlin and Palermo, European Alternatives’ School of Transnational Activism is geared specifically towards developing trans-national and trans-local organizing that doesn’t take the nation-state — or the European Union — as its unquestioned point of reference but tries to rethink and reorganize the future.

In Maynooth (Ireland), activist-scholars built on a long history of engagement with social movements and popular education to run a Masters in Community Education, Equality and Social Activism over five years. This was centered on supporting experienced activists to do participatory action research geared towards developing their own movements’ practice.

This alliance of activist educators is working together over the next two years to develop what we are calling a Movement Learning Catalyst — a project that doesn’t just exist for its own sake, but for the multiplier effects we are aiming for in movements. The immediate goal is a year-long training with residential and online elements for activists in many different movements and countries across Europe, based in research that is equally broadly based, asking what skills and knowledge people think their own movements most need in order to bring about a better world.

Out of this, we are developing open-access training resources that we hope will be widely shared and used in many different activist contexts (not only in Europe). The initial training will be expanded, with people taking selected elements of the training, regional groups working in different languages and so on. The wider goal is to develop a culture of thinking and working together across our different struggles, communities and places, that can be caught as well as taught — and to see networking and alliances growing out of that.

Learning from each other’s struggles

This is one particular model, responding to the needs we are experiencing in our own movements and networks, as well as the fragmentation of European movements that often struggle to see beyond a single place, a single issue or a single way of working. The movement learning needs are very different in other places; but it is certainly true across the world that our movements are not winning — whether in the face of climate crisis, the rise of the far right, in responding to femicide or racist policing, in resisting war and authoritarianism.

The time is too short, and the stakes are too high, not to try to learn from each other’s struggles, get the most out of our own experience, and think as hard as we can, together, about what we are doing and whether it is really working.

Laurence Cox has been involved in movements for over 35 years, including ecology and anti-war movements, anti-capitalist and international solidarity struggles, alternative education and community activism. In his day job he researches social movements and co-edits the activist/academic movement journal Interface. His recent books include “Haciendo otros mundos posibles: por qué los Zapatistas nos importan” (free, in English and Spanish); “The Irish Buddhist: the Forgotten Monk who Faced Down the British Empire;” and “Why Social Movements Matter.”