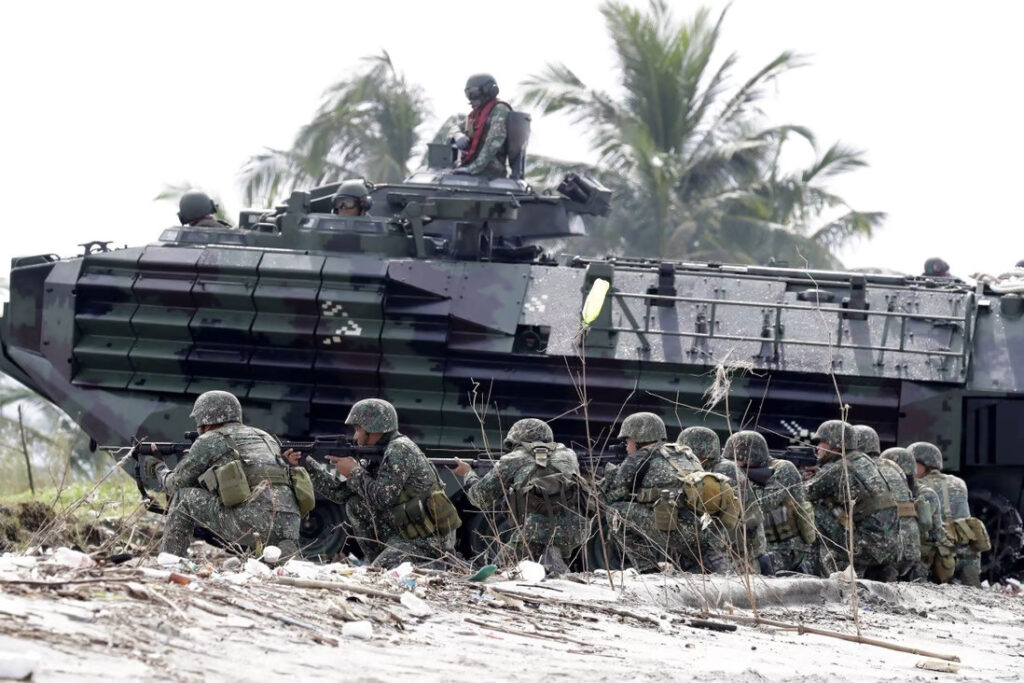 Philippine marines take their positions during a drill at the former US naval facility in Subic. File photo: AP

10 Jul 2022 – As newly-inaugurated President Ferdinand “Bongbong” Marcos Jr, son and namesake of the former Philippine strongman, begins forming his trade, security, and foreign policies, the United States and China are expected to seize the chance to reset ties amid a competing rivalry for influence.

Presidents Joe Biden and Xi Jinping were among the first world leaders to congratulate Marcos Jr days after his electoral win. US Deputy Secretary of State Wendy Sherman became the first high-ranking foreign official to meet Marcos Jr on June 9, shortly after he was declared president-elect. Not to be outdone, Chinese Foreign Minister Wang Yi was the first top-ranking foreign official to visit Marcos Jr after he was sworn in on June 30.

Both the US and China sent representatives to attend Marcos Jr’s inauguration in Manila. The American delegation was headed by Second Gentleman Douglas Emhoff, husband of Vice-President Kamala Harris, while Beijing was represented by Vice-President Wang Qishan. The Philippines’ ambassador to the US, Jose Manuel Romualdez, said on July 3 that Biden had invited his Filipino counterpart to visit the White House, though no schedule had yet been set. This makes Washington the first to extend such an invitation to Manila’s new chief executive.

Both the US and China are important partners for the Philippines, but its relations with both have their fair share of bumps.

Manila is Washington’s longest-tenured treaty ally in Asia, and the 70-year alliance remains a pillar of its external defence. The US is also a major market for the Philippines’ burgeoning business process outsourcing industry, and Manila is keen to attract more American and foreign capital diversifying away from China or expanding into Southeast Asia.

But the Duterte administration’s anti-US rants and human rights criticisms against its controversial drug war frayed ties between Manila and Washington in the last six years. China, on the other hand, is the Philippines’ largest trade partner, a huge investor and an increasingly important infrastructure builder. But it is also a fellow disputant in the South China Sea, and untoward sea incidents continue to mar ties.

The US is likely to dangle greater defence cooperation and capital, while China will pledge continued support for the Philippines’ infrastructure build-up and pour in more investment.

To forestall Chinese interest, US private equity firm Cerberus Capital Management in April took over the ex-Hanjin shipyard in Subic – a US$300 million deal billed as the biggest public-private partnership in the 75-year history of Philippine-US relations. Facing the South China Sea, Subic is a former US naval base, a bustling free port, special economic zone, and a new base for the Philippine Navy. An American defence firm, Daycraft Systems Corporation, also partnered with a local firm to operate a weapons assembly plant in neighbouring Bataan province.

China, in turn, is delivering on its infrastructure pledges and hoping to complete projects reached with the previous Duterte government. A month before the presidential election, a second Beijing-donated bridge that spans the Pasig River was opened in Manila. Five days before Marcos Jr’s inauguration, the Chinese-financed Chico River pump irrigation project in northern Luzon was also inducted into service. The project was a key piece in the Duterte government’s flagship Build, Build, Build infrastructure programme, which Marcos Jr has pledged to continue.

Early this year, a Chinese consortium also sealed a contract to design and build a railway to southern Luzon. The Philippine National Railways (PNR) Southrail, a US$2.8 billion project, is the highest funded government-to-government undertaking between the two countries. Work will begin this year on the first phase – 380km of the total 560km railway– and the railway is expected to run by 2025. Last Tuesday, China’s ambassador to the Philippines Huang Xilian confirmed the signing of a commercial contract for a Chinese-funded river bridge in Davao, expected to be completed in two years.

China is also set to submit a shortlist of design-build contractors for another rail line in Mindanao, the first such project in the Philippines’ second-largest island. Beijing is also involved in the Subic-Clark railway project, which would link two vibrant economic zones in central Luzon, and in the Kaliwa Dam project, which will enhance Metro Manila’s water security. The country was one of the first to sign up for the US-led Indo-Pacific Economic Framework (IPEF), which Biden unveiled during his maiden Asia tour in May. Last month, the Philippines attended the IPEF meeting in Paris.

Manila is also a member of the world’s largest free-trade agreement, the Regional Comprehensive Economic Partnership (RCEP), whose biggest member economy is China. While Duterte ratified RCEP last September, it has yet to be cleared by the Senate.

It remains to be seen whether Marcos will seek such concurrence given his concerns about the Philippines’ competitiveness and the deal’s impact on sensitive sectors like agriculture, which he is temporarily heading.

As the US-China rivalry heats up, with the South China Sea and the Taiwan Strait becoming arenas for great power muscle-flexing, the Philippines is increasingly squeezed in between.

The restoration of the US-Philippine Visiting Forces Agreement and the holding of one of the largest joint annual military drills in years may energise defence ties and fuel momentum for the implementation of the Enhanced Defence Cooperation Agreement. Washington may push for greater access to more Philippine bases to better respond to regional contingencies. This, however, may place its junior ally in a bind, especially if the US prepositions missiles that put Chinese targets within range.

That provides a cautionary tale for Marcos Jr. Advancing defence cooperation with its treaty ally, but avoiding antagonising its largest trade partner, will be a difficult balancing act.

Asian Angle – Lucio Blanco Pitlo III is a research fellow at the Asia-Pacific Pathways to Progress Foundation, fellow at the University of the Philippines Korea Research Centre, lecturer at the Chinese Studies Programme at Ateneo de Manila University, and contributing editor (Reviews) for the Asian Politics & Policy Journal.