The Haitian Revolution Today and the Limits of Token Solidarity 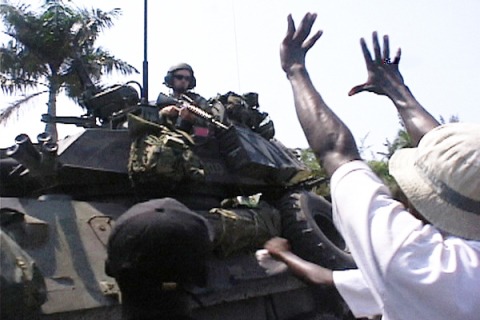 Demonstrator in Haiti in early March 2004, protesting the Feb. 29 coup. He is definitely facing the assault rifle of a U.S. soldier by raising both hands with his five fingers outstretched to symbolize the five-year term mandated by the Haitian constitution that President Aristide was not allowed to complete.
– Photo: Haiti Information Project.

24 Jun 2022 – In 1826, the Congress of Panama was organized by Simon Bolivar, including representatives from Peru, Mexico, and what was then Gran Colombia (Colombia, Ecuador, Panama, and Venezuela) and the United Provinces of Central America (Guatemala, El Salvador, Honduras, Nicaragua, and Costa Rica). Bolivar, who had been given refuge twice in Haiti,  promised that Haiti would be invited to what was arguably the first international Pan-American summit with the goal to unify the Americas against the imperial interests of Spain. The US government, however, recognized an opportunity to expand its hegemony in the region by implementing the Monroe Doctrine. Inserting itself as the new ‘protector’ in the region, it insisted that Haiti, the exemplary nation of anti-slavery Black revolution, be excluded from the Congress. Even those who were most committed to anti-imperialist unification accepted the condition – a betrayal which set a pattern not only against Haiti but against other countries that attempt to steer a course independent of North American imperialism.

Ever since the Haitian people successfully overthrew slavery and French colonialism in 1804, the US government refused to recognize the independent Haitian republic; instead the US sided with the French government to internationally isolate Haiti and force the Haitian people to pay “restitution” to their former enslavers in France, a massive robbery well-documented in the recent NYT article “The Root of Haiti’s Misery: Reparations to Enslavers”.

Echoing this history of the US exclusion of Haiti in 1826, the Biden Administration convened another Summit of the Americas in Los Angeles, excluding Cuba, Venezuela, and Nicaragua from participation. There was massive international attention and opposition by progressives to this measure. The Haiti Action Committee was part of this opposition and stands in full solidarity with the people of Cuba, Venezuela, and Nicaragua.

Compared to the opposition to this exclusion,  there has been little international opposition to the Biden Administration’s exclusion of the people of Haiti from authentic representation in the same Summit. Instead, the Haitian people were “represented” by the ruling Haitian Tet Kale Party (PHTK party), a neocolonial dictatorship installed, financed, and weaponized by the US government during the UN occupation of Haiti which followed the US-orchestrated 2004 coup against President Jean-Bertrand Aristide and the Fanmi Lavalas Political Organization. This coup was also backed by the French and Canadian governments. On June 7th, 2022, US Secretary of State Anthony Blinken was directly questioned by journalist Eugene Puryear about why the Biden Administration excluded Cuba, Venezuela, and Nicaragua from its Summit, but gave the “red carpet treatment” to the US-backed PHTK dictatorship in Haiti.

In opposition to the Biden Administration’s Summit, a wide range of activists organized a concurrent and successful People’s Summit, also held in Los Angeles as well, which included Cuba, Venezuela, and Nicaragua. The Summit was an important step forward for expanding and deepening ties of international solidarity.

But the question remains for anti-imperialist activists as we organize new international forums, alliances, and actions: will Haiti’s revolutionary popular movement be truly represented and involved in leading these efforts? Unfortunately, some US activists have supported and promoted Haitian “leftists” who have a track record in enabling and/or justifying the 2004 US-backed coup. One example is Raoul Peck, the renowned filmmaker, who belonged to the pro-coup Group 184 being funded by the US government. He was also a member of a group of Haitian intellectuals who opposed the celebration of the bicentennial of the Haitan Revolution prior to the coup.  Following the coup, Peck publicly and internationally carried out a campaign of vilification against President Aristide. For more information on the role of Peck and other Haitian intellectuals in the coup and the rewards bestowed upon them following the coup, see this article.

Another example is Camille Chalmers, an alleged representative of the Haitian popular movement. While Chalmers has been a prominent participant in previous World Social Forums and has a well-versed leftist vocabulary, he also has a history of collaboration with US imperialism in Haiti. Chalmers is a leader of the Haitian Platform to Advocate Alternative Development (PAPDA), an organization supported by Grassroots International. One of the journalists who documented the links between PANDA and the US and Canadian governments during the early coup years is Anthony Fenton. As Pierre Labossiere, the co-founder of the Haiti Action Committee, has noted:

“Camille [Chalmers] and PAPDA supported the racist, imperialist bloody coup d’etat in Haiti led by the US, France and Canada against the democratically elected and popular Lavalas government of President Jean-Bertrand Aristide. The late Senator Jesse Helms was the driving force to bring about the coup. After two failed attempts by Haitian “contras”, consisting of members of the FRAPH death squad, the disbanded repressive military and Duvalier’s Tonton Macoutes, special forces from the US, France and Canada carried out the kidnapping/coup on February 29, 2004, the year of the bicentennial of the Haitian Revolution. It resulted in an estimated 10,000 victims. The continuing 18-year US-UN occupation to shore up the coup d’etat with Brazil and other Latin American nations joining the US have added to the number of our sisters and brothers being killed, their lives destroyed and fleeing Haiti as refugees.

Camille Chalmers’ PAPDA was part of the ultra-right wing Latortue government imposed on the Haitian people by the US, France and Canada immediately after the coup. The record of atrocities of this and the succeeding US-installed coup d’etat governments is well-documented and continues to this day.”

Camille Chalmers and PAPDA did not stop at supporting the February coup and taking part in the imposed government that ruled after the coup, a regime that was jailing and killing thousands of Lavalas activists and supporters. In March  2004, immediately after the coup, Camille Chalmers and PAPDA circulated a letter urging people to publicly oppose the Jamaican government’s offer of asylum to President Aristide and Mrs. Mildred Aristide who were in the Central African Republic after having forcibly taken there by a US military plane. Many feared for their lives. At great risk, Congresswoman Maxine Waters flew to the Central African Republic to bring the Aristides to Jamaica. In this letter, Chalmers and a handful of others urged their “Caribbean partners to exert pressure on their respective governments so that they understand that Mr. Aristide’s presence constitutes a real threat to the fledgling and fragile democratic process.” In other words, they wanted the Aristides banished from the Caribbean while the new dictatorship in Haiti consolidated its power through a wave of extrajudicial killings. At the same time, the Bush Administration was exerting tremendous pressure on the Jamaican government, forcing the Aristides to accept asylum in South Africa.

The recent NYT article “Demanding Reparations, Ending Up in Exile” made clear that the coup against President Aristide was first of all in response to his call for reparations for the money Haiti had been forced to pay France for their “lost property”, in the form of human beings.

With knowledge of this history, the late veteran Guyanese activist Andaiye and Margaret Prescod, both with Women of Color/Global Women’s Strike, had to denounce the organizing committee of the World Social Forum in 2006 for inviting Chalmers. Andaiye stated:

While Chalmers strove to block the Aristides from receiving asylum in Jamaica, the repression wrought by the 2004 coup he supported has continued to intensify, culminating in a relentless pattern of massacres by paramilitaries against popular, poor neighborhoods that are bases of Lavalas. Fact-findings teams involving members of the Haiti Action Committee and the National Lawyers Guild have documented two such massacres, one carried out by UN occupation forces on July 5th, 2005 in Cite Soleil and the other carried out by the PHTK regime’s police and paramilitary attaches in Lasalin during several days in mid-November, 2018. While these massacres have proliferated across Haiti, along with targeted political assassinations, so too has destitution, reaching new levels of hunger and other forms of deprivation.

The Haitian revolution was the first in world history to decisively uproot slavery. Ever since then, Haiti has been relentlessly punished by the former slave owning and imperial powers such as the US and France. This never stopped the Haitian people from supporting Africans and Indigenous people escaping slavery and colonialism in the Americas. Haiti opened its borders and welcomed them, just as the Haitian republic provided material assistance to freedom fighters like Simon Bolivar.

Today, the Haitian people are waging the most courageous resistance against the US-backed PHTK dictatorship. Fanmi Lavalas– despite the thousands of its militants killed since the 2004 coup– continues to play a pivotal role in organizing and mobilizing popular resistance. Fanmi Lavalas is the political party that grew out of the Lavalas movement of Haiti’s poor majority, twice electing Aristide in overwhelming majorities, first in 1991 and then in 2000, both times being interrupted by US-backed coups. While Chalmers and PAPDA tried to discredit Fanmi Lavalas, they have not succeeded. As Margaret Prescod recently put it:

“Since the coup there are continued efforts on both the right and some sectors of the left to silence, discredit and sideline President Aristide and Fanmi Lavalas, an effort which has had more success within the international arena than on the ground in Haiti. Without US interference in the last Presidential election, the Lavalas candidate Dr. Maryse Narcisse would [quite likely] have become Haiti’s first elected woman president. Those in the popular movement in Haiti know very well who stands with them, who is being used by those who want to discredit Lavalas, and who has betrayed their movement.”

It is far past time that anti-racist and anti-imperialist activists organizing forums and summits make sure that coup collaborators are not given a platform to spread lies and undermine the Haitian popular movement and its leadership. Bridges of solidarity must be built with the true representatives of the Haitian people, including members of Fanmi Lavalas, in this decisive moment of their history. As US journalist and veteran Haiti solidarity activist Kevin Pina expressed during a June 22  interview on Pacifica Radio’s  Sojourner Truth with Margaret Prescod:

“The greatest act of solidarity is to carefully choose who you work with  and you do that based upon a very conscious understanding of the situation. Anything short of that, you should not be involved in solidarity. You’re doing more harm than good.”

Seth Donnelly is a member of the Haiti Action Committee and the author of The Lie of Global Prosperity: How Neoliberals Distort Data to Mask Poverty and Exploitation (MR Press 2019).