A Call to Cancel RIMPAC in Hawaiʻi

The movement to demilitarize and deoccupy Hawai‘i is guided by kapu aloha, a code of conduct grounded in nonviolent resistance and Hawai’ian values. 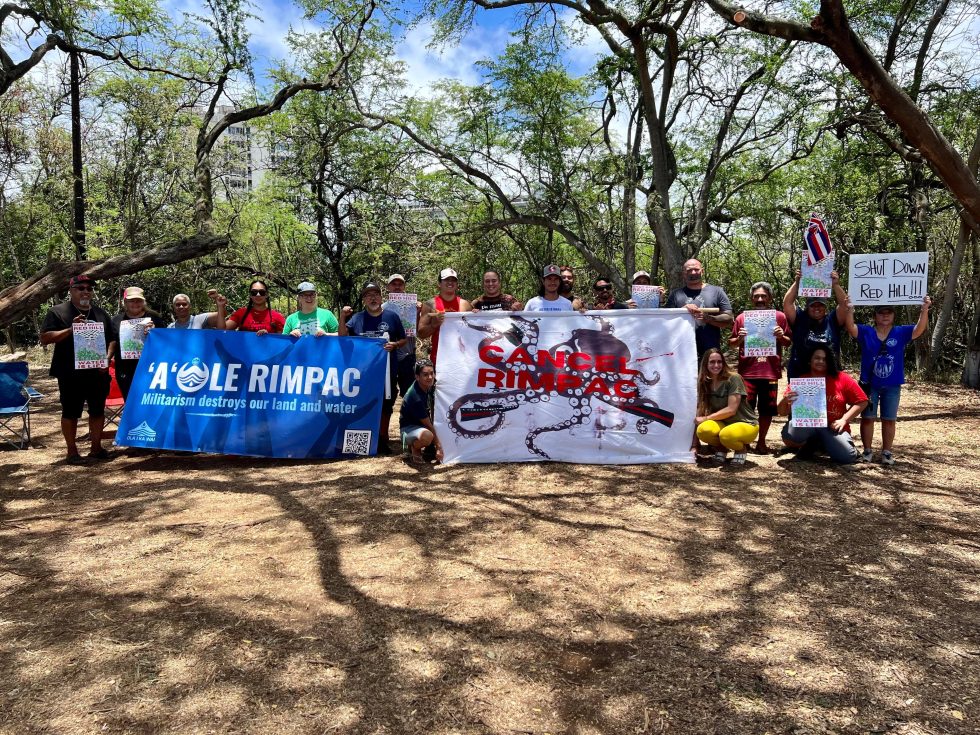 26 Jul 2022 – As headquarters to the U.S. “Indo-Pacific” Command, Hawai‘i is the site of RIMPAC 2022 where 26 nations, including 38 surface ships, four submarines, 170 aircraft, and 25,000 personnel are assaulting the Hawaiian islands, all at the invitation of the U.S. Navy. This bi-annual desecration has devastating impacts on Hawai‘i’s land, water, and people, especially indigenous Hawaiians, who have suffered more than 129 years of illegal occupation from this same Navy. Hawai‘i is already heavily militarized with 142 U.S. military bases and installations that occupy 224,897 acres of Hawaiian land. USINDOPACOM (formerly USPACOM) is the U.S. military’s oldest and largest unified military command, claiming jurisdiction over more than half of the earth’s surface and a majority of the world’s population.

As the center of the U.S. military empire and network of bases throughout the Pacific and Asia, Hawai‘i is a critical site to resist the endless U.S. quest for empire and war, especially against China. In the wake of the U.S. Navy’s massive fuel leaks at Red Hill/Kapūkaki that contaminated O‘ahu’s largest freshwater source, poisoning 93,000 people including mostly U.S. soldiers and their families, the U.S. military holding war games on Hawai‘i adds further insult to injury.

Set over six weeks, RIMPAC is the largest maritime war exercise in the world. Although the U.S. military promises to be “good stewards of the environment,” RIMPAC has only ever increased harm, not reduced it.

Two years ago, due to COVID, RIMPAC was scaled down to only “at-sea” war games. As a result, dozens of endangered sea turtles at Bellows beach on O‘ahu nested for the first time. That moment of hope and regeneration is fleeting as RIMPAC exercises destroy our reef and marine habitats through large-scale amphibious assault landings. Additionally, several “Sinkex” exercises blow-up decommissioned ships off the coast of Kaua‘i, with no mandated clean-up and live-fire trainings into our conservation zones. 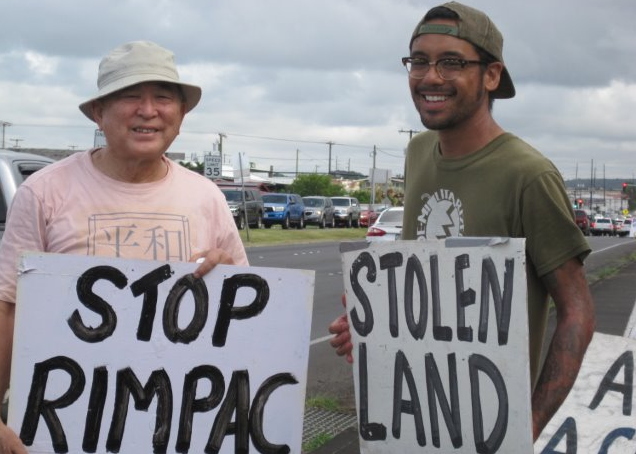 Not only do people in Hawaii oppose the RIMPAC war games they also want the liberation of Hawaii. From Jim Albertini

Alongside the U.S. military’s assault on the environment is its violence against women. Hawaiʻi has yet to comprehensively collect data on gender-based violence committed by the U.S. military like that collected by the Okinawan Women Act Against Military Violence on women raped and murdered by the U.S. since World War II. Yet, there is ample evidence of violence committed by U.S. servicemen against women in Hawai‘i, such as Ivy Harris who was murdered in 2013 by a Marine after being trafficked to Hawai‘i. Last year, Selena Roth was murdered by her U.S. Army husband at Schofield barracks, and in 2020, Kayla Holder and her six-month old baby Kainoa were both allegedly murdered by her Army reservist boyfriend. Just last week, Dana Alotaibi, was stabbed to death while pregnant, allegedly by her ex-husband, an active duty Marine in Kāne‘ohe.

According to the Hawai‘i Commission on the Status of Women, women and gender minorities face heightened vulnerability for military violence and sex trafficking during times of increased demand that surges during RIMPAC. As Executive Director Khara Jabola-Carolus explains, “RIMPAC is the military’s Super Bowl.”  That’s because of the toxic symbiosis between militarism and tourism, or “Militourism,” a term coined by the Pacific studies scholar Teresia Teaiwa. Sailors and soldiers arrive to the shores of Hawaiʻi with a sense of entitlement to have all of their desires fulfilled, leaving our people at heightened risk of Covid-19 and other diseases. “Hawaiʻi, like a lovely woman, is there for the taking,” wrote professor and Hawaiian sovereignty leader Haunani-Kay Trask, who famously described the United States as Hawaiʻi’s pimp, forever selling the islands to the highest bidder, with no concern for self-determination.

The U.S. military’s imperial patriarchal violence is important to highlight against RIMPAC’s eerily cheerful slogan, “Capable Adaptive Partners,” its adventure-seeking promo trailer, and non-stop reminders of RIMPAC‘s benefits to our economy. We are told to be grateful and to be silent about contaminated water, to ignore the sex trafficking, to ignore the loss of marine life because they are all part of the business of RIMPAC and continued U.S. military presence to advance “national security.”

But what twisted version of national security doesn’t include clean water? What kind of government poisons its own people, including its military families, then repeatedly lies about it? Many grassroots organizations in Hawai‘i and multiple international partners reject the military’s lies and demand genuine security.

The containment of China is an absurd excuse to destroy Hawaiian land and the entire Pacific Ocean. The United States continues to use “yellow peril” and a culture of fear to stay in a permanent state of war. Instead, we must center the voices of Indigenous people of the Pacific who have the most to lose in the war between empires. “National security doesn’t include us,” scholar and activist Tina Grandinetti reminds us. If the United States declares war on China, Hawaiʻi will provide a most convenient target, as will Guåhan, Okinawa, South Korea, the Philippines, and all the places occupied by U.S. military bases. If the bombing of Pu‘uloa (Pearl Harbor) taught us anything, it’s when the United States takes your land, you inherit all of America’s enemies. From our perspective, islanders are protecting the United States, not the other way around.

Over one million lives have been lost, $8 trillion of U.S. tax dollars have been spent, and 38 million people have been left refugees in the so-called “war on terror,” according to the Cost of War Project. Add to that the increased domestic violence, rape, and suicide within the U.S. military, and the evidence is clear: the U.S. version of militarized “security” isn’t working. These endless wars only “secure” endless profits for the military industrial complex, and endless misery for ordinary people. As horrified as we are by what RIMPAC does to Hawai‘i, we are equally horrified to be the unwilling host of militaries from Israel, the Philippines, and Indonesia, all guilty of gross human rights violations against indigenous people.

In November 2021, in response to the Red Hill leak, Hawaiian leaders built a beautiful ko‘a (shrine), a place of prayer where people have gathered weekly right outside the headquarters of the U.S. Pacific Fleet. This is a place to make offerings of clean water to Kāne, the akua (deity) of creation. The movement to demilitarize and deoccupy Hawai‘i is guided by kapu aloha, a code of conduct grounded in non-violent resistance and Hawaiian values. Sadly, the ko‘a was desecrated on the first night of RIMPAC. The next day, it was rebuilt along with a kāhea (a call) to come and protect the land from further desecration. Over the ‘Anahulu (10 days of observation), the community was invited to practice aloha ʻāina (love for the land/ that which feeds us), engage in grassroots political education on demilitarization, and gain a deeper understanding of ea (sovereignty, breath, life). Instead of allowing the U.S. military and empire to continue to divide us, we must reimagine an Oceania that connects us and builds a generative future based on genuine security and aloha ʻāina.

Kim Compoc is an assistant professor of history at University of Hawai‘i-West O‘ahu, and an organizer with Women’s Voices, Women Speak.

Joy Lehuanani Enomoto is an artist and organizer with Hawai‘i Peace and Justice. They are both based in Honolulu.