All the Way to Odessa

As Eurasian integration will become an even stronger vector, Russian diplomacy will be solidifying the new normal. 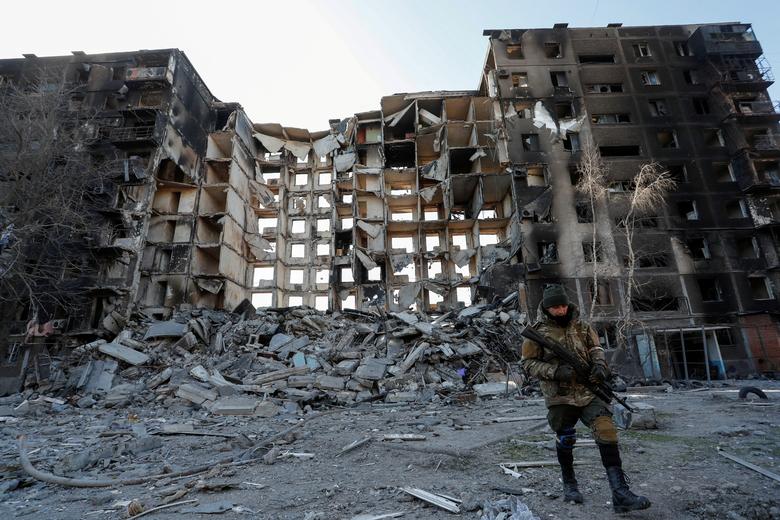 A service member of pro-Russian troops walks near an apartment building destroyed in the course of Ukraine-Russia conflict in the besieged southern port city of Mariupol, Ukraine. REUTERS/Alexander Ermochenko

26 Aug 2022 – Dmitry Medvedev, relishing his unplugged self, has laid down the law on the Special Military Operation (SMO). Bluntly, he affirmed there is a “one and a half” scenario: either to go all the way, or a military coup d’etat in Ukraine followed by admitting the inevitable. No tertium applies.

That’s as stark as it gets: the leadership in Moscow is making it very clear, to internal and international audiences, the new deal consists in slow cooking the Kiev racket inside a massive cauldron while polishing its status of financial black hole for the collective West. Until we reach boiling point – which will be a revolution or a putsch.

In parallel, The Lords of (Proxy) War will continue with their own strategy, which is to pillage an enfeebled, fearful, Europe, then dressing it up as a perfumed colony to be ruthlessly exploited ad nauseam by the imperial oligarchy.

Europe is now a runaway TGV – minus the requisite Hollywood production values. Assuming it does not veer off track – a dicey proposition – it may eventually arrive at a railway station called Agenda 2030, The Great Narrative, or some other NATO/Davos denomination du jour.

As it stands, what’s remarkable is how the “marginal” Russian economy hardly broke a sweat to “end the abundance” of the wealthiest region on the planet.

Moscow does not even entertain the notion of negotiating with Brussels because there’s nothing to negotiate – considering puny Eurocrats will only be hurled away from their zombified state when the dire socio-economic consequences of “the end of abundance” will finally translate into peasants with pitchforks roaming the continent.

It may be eons away, but inevitably the average Italian, German or Frenchman will connect the dots and realize it is their own “leaders” – national nullities and mostly unelected Eurocrats – who are paving their road to poverty.

You will be poor. And you will like it. Because we are all supporting freedom for Ukrainian neo-nazis. That brings the concept of “multicultural Europe” to a whole new level.

The runaway train, of course, may veer off track and plunge into an Alpine abyss. In this case something might be saved from the wreckage – and “reconstruction” might be on the cards. But reconstruct what?

Europe could always reconstruct a new Reich (collapsed with a bang in 1945); a soft Reich (erected at the end of WWII); or break with its past failures, sing “I’m Free” – and connect with Eurasia. Don’t bet on it.

Get back those Taurian lands

The SMO may be about to radically change – something that will drive the already clueless denizens of U.S. Think Tankland and their Euro vassals even more berserk.

President Putin and Defense Minister Shoigu have been giving serious hints the only way for the pain dial is up – considering the mounting evidence of terrorism inside Russian territory; the vile assassination of Darya Dugina; non-stop shelling of civilians in border regions; attacks on Crimea; the use of chemical weapons; and the shelling of Zaporizhzhya power plant raising the risk of a nuclear catastrophe.

This past Tuesday, one day before the SMO completing six months, Crimea’s permanent representative to the Kremlin, Georgy Muradov, all but spelled it out.

He stressed the necessity to “reintegrate all the Taurian lands” – Crimea, the Northern Black Sea and the Azov Sea – into a single entity as soon as “in the next few months”. He defined this process as “objective and demanded by the population of these regions.”

Muradov added, “given not only the strikes on Crimea, but also the continuous shelling of the Zaporizhzhya nuclear power plant, the dam of the Kakhovka reservoir, peaceful facilities on the territory of Russia, the DNR and LNR, there are all preconditions to qualify the actions of the Banderite regime as terrorist.”

The conclusion is inevitable: “the political issue of changing the format of the special military operation” enters the agenda. After all, Washington and Brussels “have already prepared new anti-Crimean provocations of the NATO-Bandera alliance”.

So when we examine what the “restoration of the Taurian lands” implies, we see not only the contours of Novorossiya but most of all that there won’t be any security for Crimea – and thus Russia – in the Black Sea without Odessa becoming Russian again. And that, on top of it, will solve the Transnistria dilemma.

Add to it Kharkov – the capital and top industrial center of Greater Donbass. And of course Dnipropetrovsk. They are all SMO objectives, the whole combo to be later protected by buffer zones in Chernihiv and Sumy oblasts.

Only then the “tasks” – as Shoigu calls them – of the SMO would be declared fulfilled. The timeline could be eight to ten months – after a lull under General Winter.

As the turbo-charged SMO rolls on, it’s a given the Empire of Chaos, Lies and Plunder will continue to prop up and weaponize the Kiev racket till Kingdom Come – and that will apply especially after the Return of Odessa. What’s unclear is who and what gang will be left in Kiev posing as the ruling party and doing specials for Vogue while duly fulfilling the mass of imperial diktats.

It’s also a given the CIA/MI6 combo will be refining non-stop the contours of a massive guerrilla war against Russia in multiple fronts – crammed with terror attacks and all sorts of provocations.

Yet in the Bigger Picture it’s the inevitable Russian military victory in Donbass and then “all the Taurian lands” that will hit the collective West like a lethal asteroid. The geopolitical humiliation will be unbearable; not to mention the geoeconomic humiliation for vassalized Europe.

As Eurasian integration will become an even stronger vector, Russian diplomacy will be solidifying the new normal. Never forget that Moscow had no trouble normalizing relations, for instance, with China, Iran, Qatar, Saudi Arabia, Pakistan and Israel. All these actors, in different ways, directly contributed to the fall of the USSR. Now – with one exception – they are all focused on The Dawn of the Eurasian Century.

Anticopyright: Editorials and articles originated on TMS may be freely reprinted, disseminated, translated and used as background material, provided an acknowledgement and link to the source, TMS: All the Way to Odessa, is included. Thank you.