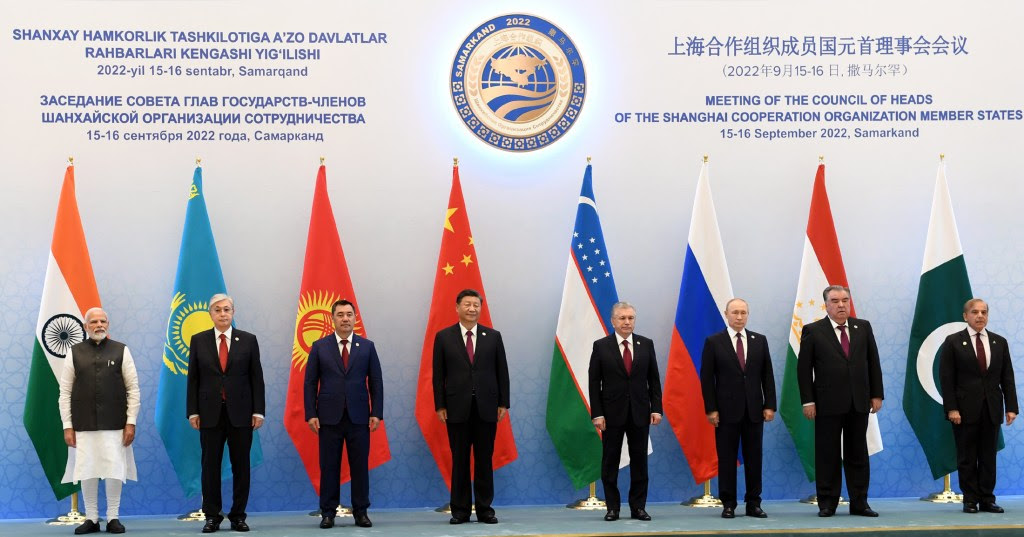 The 22nd Meeting of the Council of Heads of State of the Shanghai Cooperation Organization (SCO), in Samarkand, Uzbekistan on 16 Sep 2022. Prime Minister’s Office, GODL-India, via Wikimedia Commons

16 Sep 2022 – In the official Chinese and Russian statements regarding yesterday’s meeting between Presidents XI Jinping and Vladimir Putin in Samarkand lies not a scintilla of evidence that China’s support for Putin’s invasion of Ukraine has weakened.

In my view, if Putin decides to up the ante in Ukraine, XI would be likely to support him. Most analysts of China doubt that this would extend to China’s stirring up trouble in the South China Sea or opposite Taiwan, but most Chinese analysts did not expect China to tolerate, much less endorse, Russia’s invasion of Ukraine. So your guess is as good as mine.

Underneath the ‘Dear Friend’ professions of solidarity lies a concrete-reinforced commitment, so to speak, indeed a China-Russia entente that bespeaks an intention to coordinate closely – including before any major military initiatives against the U.S. or its proxies.

Some of the mutual statements of solidarity may sound boilerplate, but it is important to remember that the boilerplate has acquired additional steel reinforcement, so to speak, in the crucible of this year 2022. Each country has pledged strong support for the other’s “core interests” – for Russia, re. Ukraine; for China, re. Taiwan.

The “core interest” mutual support was given prominence in the official Chinese readout of the Putin-Xi conversation:

“President Putin noted that the world is undergoing multiple changes, yet the only thing that remains unchanged is the friendship and mutual trust between Russia and China.

“The Russia-China comprehensive strategic partnership of coordination is as stable as mountains. … The Russian side is firmly committed to the one-China principle and condemns provocative moves by individual countries on issues concerning China’s core interests. Russia will consolidate and deepen bilateral and multilateral communication and collaboration with China and expand cooperation in key areas such as trade and energy.”

In his remarks, Putin emphasized the “key role” played by “the foreign policy tandem of Moscow and Beijing” in ensuring global and regional stability and took another potshot at the undefined “rules-based” order promoted by Washington. He also expressed appreciation for “our Chinese friends’ balanced position in connection with the Ukraine crisis.”

Putin also fleshed out the progress in Russia’s trade with China:

“Last year, trade grew by 35 percent to over $140 billion. In the first seven months of this year, our trade increased by another 25 percent. I am convinced that by the end of the year we will reach new record high levels, and in the near term, as agreed, we will bring our annual trade to $200 billion or more.”

On a personal note, in the early 60s when I was responsible for analyzing Sino-Soviet relations, mutual trade amounted to $200 million. Granted: bilateral relations back then were in the pits. But still, $200 million to $200 billion is something we never imagined in our wildest dreams.

The Chinese and Russians can thank the reckless-feckless team of Secretary of State Antony Blinken and national security adviser Jake Sullivan, as well as their immediate predecessors for helping that increase to be as large as it it.

Finally, right after the Xi-Putin meeting yesterday, ABC’s Martha Raddatz read the following words of wisdom into the TV camera:

“Given what has happened in Ukraine, with Russia losing territory and its forces exposed as weak and hapless, even if Russia gets nothing [from XI], the meeting will signal an anti-Western bond which is significant – it IS significant.”

I believe Martha got that last part right. We shall have to wait and see how this all plays out regarding Ukraine and Taiwan.