A Four-Week Festival of Double Standards 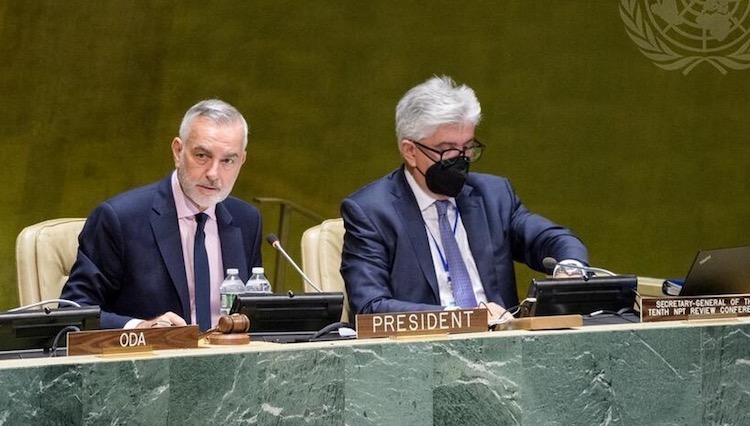 30 Aug 2022 – The alarm bells have been ringing right across Europe as the Russian invasion of Ukraine has not only triggered nuclear threats by one of the world’s major nuclear powers but also set off emergency drills outside a nuclear power plant in Zaporizhzhia which has come under fire.

Against this distressing backdrop, a four-week Review Conference of the Nuclear Non-proliferation Treaty (NPT) concluded on August 26 on a note of abject disappointment.

Despite multiple closed-door meetings and a wide range of open discussions, the meeting failed to agree on a final “outcome document”.

The International Campaign to Abolish Nuclear Weapons (ICAN), a coalition of non-governmental organizations (NGOs) in over a hundred countries promoting adherence to and implementation of the nuclear weapon ban treaty, blamed Russia for “blocking a final agreement”.

The conference was held amid sharply rising international tensions and increasing risks of the use of nuclear weapons following Russia’s invasion of Ukraine and its associated threats to use nuclear weapons, said ICAN.

During the conference, many of the 191 state parties to the NPT spoke of the need to take decisive action to reduce nuclear risks, condemn nuclear threats, stop the expansion and modernization of nuclear arsenals, and make progress on carrying out the nuclear disarmament obligations of the treaty.

“This result is terminally unserious, and a total abdication of responsibility in the face of an unacceptably dangerous global situation,” ICAN Executive Director Beatrice Fihn said.

“At a time when an NPT nuclear-weapon state is using its nuclear weapons to facilitate an illegal invasion when the nuclear-armed states have not only failed to make progress on their disarmament obligations but have spent over $82 billion on maintaining and upgrading their arsenals when the risk of use of nuclear weapons is higher than ever, the failure of the review conference to take any action is inexcusable,” she declared.

Tariq Rauf, former Head of Verification and Security Policy, and former Alternate Head of the NPT delegation at the International Atomic Energy Agency (IAEA) told IDN “It is not at all surprising that the Tenth NPT Review Conference ended without agreement on recommendations and actions to strengthen implementation of the NPT and of the measures and actions agreed at the 1995, 2000 and 2010 review conferences”.

Though this review conference failed over the matter of Russia’s attack on Ukraine and armed hostilities at the Zaporizhzhia and Chernobyl nuclear power plants; there was a lot of dissatisfaction with the lack of agreement on any timelines, benchmarks and accountability for nuclear disarmament.

While unexpectedly, Rauf said, Egypt signed off on a very weak and essentially useless text on setting up a nuclear-weapon-free zone in the Middle East that lacked any call on Israel to give up its nuclear weapons.

He said many other Arab States were privately incensed at this sellout by Egypt to the US.

“Attending my seventh NPT Review Conference as an official delegate, I was disappointed at the lack of ambition on nuclear disarmament by the five nuclear-weapon States and their dependent allies, as well as their unified thwarting of all efforts to recognize the Treaty on the Prohibition of Nuclear Weapons as complementary to the NPT.”

Rauf said risk-reduction was the priority for the cabal of nuclear dependent States, not reductions in nuclear weapons.

“The 2003, 2005 and 2015 stalemates also involved Egypt, 2007 also Iran, and now 2022 it is Russia. The danger of nuclear conflagration is increasing, but the nuclear-armed and nuclear-reliant Neros are fiddling away as the skies darken under nuclear threats,” Rauf warned.

Under the Presidency of Ambassador Gustavo Zlauvinen of Argentina, the Tenth NPT Review Conference was the best organized, he pointed out, but the Conference President could not pull a rabbit out of his hat at the conclusion on August 26 evening, as there was no rabbit to be found in the President’s hat—the NPT States had ensured there would be no rabbit [final declaration].

Dr Rebecca Johnson, NPT expert and author on nuclear issues for over forty years, told IDN “amid heightened nuclear threats, proliferation and war, this most recent NPT Review Conference failure is dangerous but not surprising”.

“Long before Russia vetoed over references to the endangered Zaporizhzhia nuclear power plant in Ukraine, the draft NPT outcome document had already been fatally weakened on disarmament, nonproliferation and the necessity to prevent nuclear use, war and accidents,” she pointed out.

“Without in any way downplaying the globally serious humanitarian and environmental dangers when military threats combine with nuclear facilities, let’s face the fact that Russia and other nuclear-armed NPT members had spent four weeks criticising each other but colluding to block meaningful recommendations and actions on nuclear disarmament and nuclear dangers that would have impact on existing nuclear arsenals.”

Despite the rhetoric, she said, they help each other to keep nuclear weapons and ignore or belittle nuclear disarmament initiatives, including the Treaty on the Prohibition of Nuclear Weapons (TPNW).

“France had shamefully insisted on deleting practically every reference to the TPNW, including the basic fact that the first meeting of TPNW states in Vienna this year had adopted a declaration and programme of action. Ignoring reality is foolish as well as dangerous.”

“The NPT failure is because the nuclear-armed governments are busy expanding nuclear reliance and enhancing nuclear weapon capabilities. They think nuclear weapons give them deterrence and freedom of military action in countless ways. They are wrong.”

She added: “How can they present themselves as responsible NPT members as they promote and sell nuclear technologies to the highest bidder as if this trade could be safe, secure or environmentally friendly?”

At the NPT Conference the US, UK and China wrangled about Australia’s nuclear submarine plans (AUKUS) while ignoring concerns and opposition from numerous Pacific countries. No wonder NPT conferences keep failing, Johnson said.

“Having worked for nuclear safety, disarmament and security at every NPT meeting from 1994, I have seen few successes, many failures and much political posturing. In the General Assembly Hall late Friday night (August 26), we heard expressions of anger, disappointment, hope and determination. Austria called on all NPT members who want to achieve actual progress on nuclear disarmament to join the TPNW.”

The Vienna meeting of States Parties showed what needs to be done and laid foundations for more collective, inclusive and practical steps to achieve nuclear disarmament and security in the real world.

Building on that, “we all need to embrace the promise and commitment enshrined in Mexico’s joint statement on behalf of many nuclear-free nations and peoples: ‘We will not rest until the last state has joined the TPNW, the last warhead has been irreversibly dismantled and destroyed, and nuclear weapons have been totally eliminated from the Earth’.”

UN Secretary-General António Guterres expressed disappointment over the inability of the Conference to reach consensus on a substantive outcome and to capitalize on this opportunity to strengthen the NPT and advance its goals.

While he welcomed “the sincere and meaningful engagement by NPT parties and the fact that the Conference recognized the Treaty as the ‘cornerstone’ of the global disarmament and non-proliferation regime,” he regretted that it was unable to address the pressing challenges that are threatening collective security.

“The fraught international environment and the heightened risk of nuclear weapons being used, by accident or through miscalculation, demand urgent and resolute action,” he said, while appealing to all member states to use every avenue of dialogue, diplomacy, and negotiation to ease tensions, reduce nuclear risk and eliminate the nuclear threat once and for all.

A world free of nuclear weapons remains the United Nations’ highest disarmament priority and a goal to which Guterres remains firmly committed.

The Secretary-General expressed his sincere appreciation to Ambassador Zlauvinen, President of the Review Conference, for his vigorous efforts to facilitate agreement on an outcome document.

Daryl G. Kimball, executive director of the Washington-based Arms Control Association (ACA), which has tracked the progress of treaty implementation since the first NPT review conference in 1975, said the NPT is often called the cornerstone of global nuclear nonproliferation and disarmament, but the debate and results of this meeting reveal there are cracks in the foundation of the treaty and deep divisions between nuclear-armed states.

“Even if Russia had been more flexible on how the NPT Review Conference should address the Zaporizhzhia nuclear crisis, the draft text that emerged from the conference negotiations illustrates there is general support for the treaty, but a deficit of leadership—and concrete action—on disarmament goals and objectives,” Kimball said.

“This NPT conference represents a missed opportunity to strengthen the treaty and global security by agreeing to specific action plan with benchmarks and timeframes that is essential to effectively address the growing dangers of nuclear arms racing and nuclear weapons use,” he said.

“There was one important item on the list of disarmament measures that was agreed to in the draft conference document that does set forth a specific, unconditional action step within a set timeframe,” Kimball noted. In paragraph 187.17, the document says:

“The Russian Federation and the United States commit to the full implementation of the New START Treaty and to pursue negotiations in good faith on a successor framework to New START before its expiration in 2026, in order to achieve deeper, irreversible, and verifiable reductions in their nuclear arsenals.”

“The ugly truth, no matter how we wrap it is that all nine nuclear weapon states have no intention to disarm; quite to the contrary the trajectory is towards more sophisticated ‘usable’ weapons and delivery systems. The emperor has no clothes …”.  [IDN-InDepthNews – 30 August 2022] 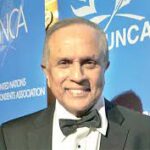 Produced as a joint media project between The Non-profit International Press Syndicate Group and Soka Gakkai International in consultative status with ECOSOC.

This article is published under the Creative Commons Attribution 4.0 International licence. You are free to share, remix, tweak and build upon it non-commercially. Please give due credit.