14 Oct 2022 – Huwwara has been under near constant attack since yesterday, when groups of armed settlers began attacking several points in the town as they were escorted and enabled by the Israeli army. 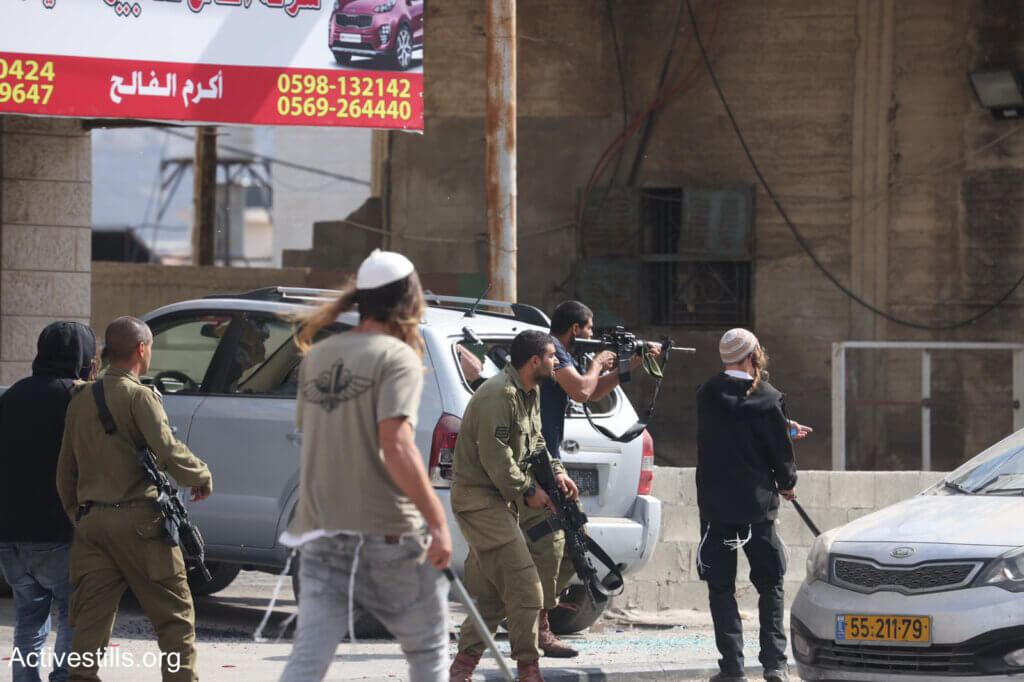 Israeli settlers and soldiers during the attack on Huwwara on October 13, 2022.
(Photo: Oren Ziv/Activestills)

Israeli settlers continued their attack on the Palestinian town of Huwwara in the northern occupied West Bank for the second day in a row today, vandalizing several storefronts, vehicles, and homes, while Israeli forces fired live ammunition at Palestinians in the town.

At around 1 p.m., as Friday prayers were ongoing in the town, groups of armed and masked Israeli settlers began attacking homes and storefronts off the main road of the town, that connects Huwwara and the surrounding villages with the city of Nablus to the north.

“They started throwing rocks at passing cars, breaking the windows of the stores and vandalizing them from the inside, vandalizing vehicles, trying to set them on fire, and attacking homes,” Salamah Saleem, 60, a local activist, told Mondoweiss.

“They did all this during prayer time, when most of the men in the village were in the mosque, and it was just the women and children who were at home alone,” Saleem said. “These are planned attacks, and they are getting worse with each day.”

At least two Palestinians were injured with live ammunition, with one reported to be in serious condition, according to local sources.

Huwwara has been under near constant attack since Thursday afternoon, when groups of armed settlers began attacking several points in the town, primarily on the main road, vandalizing dozens of storefronts and vehicles. The settlers also burned olive trees, and attacked several homes, a local amusement park, and a cafe on the outskirts of the town.

Israeli settlers set Palestinian agricultural lands on fire in the town of #Huwwara in the north of the occupied West Bank. pic.twitter.com/K8xiNFOgLd

A representative from the local council in Huwwara told Mondoweiss that at least eight young men were detained from the village since yesterday, four of whom have been released, and four who are still in Israeli custody.

“What’s happening right now in Huwwara is terrifying, and it’s a sign of what’s to come in the rest of the West Bank as the settlers continue their violent rampages on Palestinian towns like ours,” Saleem said.

The first attack began shortly after 2:30 p.m. on Thursday afternoon, when a gang of masked and armed settlers arrived on the main road of Huwwara, and began attacking cars that were both passing by and parked on the road.

“It all happened suddenly. They started throwing large rocks at the cars, trying to break the windows of any Palestinian car that they saw around them,” Saleem said. “Then they started to attack the shops and storefronts.”

“They started breaking the windows and doors down, and entering the shops and breaking everything inside,” Saleem said, adding that the settlers were armed with bats, large sticks, rocks, knives, and guns. “There were teenagers with guns. We saw 15-year-old settlers with guns.”

Today: Israeli settlers backed by Israeli colonial forces attack Palestinian cars and shops in Huwwara village, near Nablus. Since Tuesday, there has been an Israeli military closure on Nablus, after one Israeli soldier was killed.

He added that several store owners were injured when they were hit with rocks and broken glass.

While the settlers were attacking the shops and vehicles, Israel soldiers stationed in the area began firing tear gas, rubber bullets, and sound bombs at the Palestinian civilians in the area.

Videos taken on the scene were posted on social media, showing armed Israeli forces working in tandem with the settlers, pointing their guns and shooting towards the Palestinians in the area.

“The soldiers were there to protect the settlers. They did nothing to stop the settlers from their attack, they were only suppressing any Palestinians who were trying to defend themselves from the settlers,” he said.

At the same time that the settlers were attacking shops on the main road, another gang of settlers were coordinating an attack on the outskirts of Huwwara, around 1 kilometer away from the Israeli settlement of Yitzhar, which is home to notoriously violent settlers that frequently attack the Palestinian villages surrounding the settlement.

“I was at home when I got the call around 3 p.m. that my coffee shop up on the hill was on fire, and that the settlers were attacking the area,” Shadi Yaseen Odeh, 33, a resident of Huwwara told Mondoweiss.

But by the time Shadi got up to where his coffee shop was, it was too late. The entire shop had been burned to the ground. Nothing was salvageable. The local amusement park and a number of homes next door had also been vandalized, and Israeli settlers had set fire to a number of vehicles and olive trees in the area.

“I was speechless when I saw the state of the coffee shop. I couldn’t believe my eyes. Everything was gone,” he said. “I lost everything.”

Odeh said that a number of the neighbors and employees from the amusement park next door had attempted to defend the area from the settlers, and put out the fire that the settlers started, but they were stopped by a group of Israeli soldiers who were in the area.

“My entire source of living is gone. I don’t have the money to rebuild this place. I’ll have to go look for work in order to support my family,” he said.

The attack on Thursday afternoon was just the beginning of what turned into “24 hours of hell” for the people of Huwwara, as one resident described it.

A few hours after the first attack on the main road and the outskirts of Huwwara, another gang of armed and masked settlers returned, this time at around 9:30 p.m. on Thursday night.

“She called me freaking out, saying the settlers and soldiers were attacking our home and our shop below, which is on the ground floor below us,” Dalal told Mondoweiss.

“I didn’t hear anything else she said, I just ran. I could barely press the elevator button to go down because I was shaking so badly. I was scared for my wife and kids,” Dalal recounted.

“When I arrived and started trying to defend my home from the soldiers and settlers, the settlers threw rocks at our house and the soldiers fired tear gas at us,” he said, adding that the windows were broken by the settlers, and the house was slowly filling up with tear gas.

“My daughter fainted because she inhaled a large amount of tear gas, but we couldn’t get out of the house because the settlers were surrounding us,” he said.

“They were throwing stones at cars, windows, anything they saw,” he said.

After what felt like an eternity, the settlers moved on from Dalal’s house, and continued to wreak havoc on shops and homes down the street, as Israeli soldiers protected them. He was able to evacuate his daughter to the hospital, where she was treated along with several other Palestinians from the town for tear gas inhalation and other injuries.

Settler terror is rampant tonight all over the West Bank. Reports of cars attackedband injured Palestinians from areas of Nablus, Salfit, Ramallah, Jordan Valley, & others.

This video is from Huwwara from shortly ago.

Notice the settlers are aided by the Israeli military. pic.twitter.com/IdehGhCBXj

The attacks did not stop there.

At around 3 a.m., residents of Huwwara began posting on local Facebook and Whatsapp groups that the settlers had returned to the main road, this time further up north, and were vandalizing more shops.

“They started attacking people’s houses in the middle of the night while they were sleeping,” Salamah Saleem told Mondoweiss.  “We just heard screams as stones broke through people’s windows. Some people reported that their shops were shot at.”

By 1 p.m. the next day, the settlers returned to Huwwara and launched another attack, in tandem with dozens of Israeli troops stationed in the area. Palestinians from the town confronted the settlers and soldiers, who violently suppressed the Palestinians using live ammunition.

The confrontations lasted into the evening in Huwwara.

“We still don’t know exactly how many people have been injured, or just how much damage has been done to people’s shops and houses in the town over the past 24 hours, because the attacks are still ongoing as we speak,” Saleem said.

The attacks on Huwwara come amidst an intensification of Israeli military and settler violence in the West Bank, as Israel cracks down on growing armed resistance in the occupied territory.

At the same time as the attack on Huwwara on Thursday, Israeli settlers were also invading Al-Tireh neighborhood in Ramallah. According to eyewitnesses, at least two buses of settlers arrived under the protection of Israeli military and border police during the attack.

On Thursday and Friday, settler attacks on Palestinians, their property, and olive groves were reported in Nablus City, the Jordan Valley, and the Nablus-area villages of Urif, Qusra Qariyot, and Azmut.

The Palestinians in Huwwara say that the attacks  are an indication of worsening settler violence in the West Bank amid a culture of impunity for settlers, as well as the protection they receive from Israeli forces during their attacks.

“Yesterday was really bad, unlike anything I’ve seen before,” Shadi Odeh told Mondoweiss, sitting outside what remained of his burned down coffee shop.

“We are frequently attacked by the settlers in the area, but things are getting worse. We can feel it,” he said. “It’s gotten to the point where you can’t even safely take a walk down the street, or you don’t feel safe in your own home.”

“The settlers and the soldiers are working together,” Mohammad Dallal said. “They are the same. When the soldier takes off his uniform, he is a settler.”

“The settlers and soldiers have traumatized our town, our children, our elderly,” he said. “If this attack and others like it happened without the support of the soldiers, it would not have escalated this far — the settlers  wouldn’t have been as confident,” Dallal said.

Saleem echoed similar sentiments, saying “the moment you try to defend yourself or your family, the soldiers start attacking you. They point their guns at us, they shoot at us, etc, but not the settlers.”

The policy of “settler-state collusion,” where Israeli forces supervise, protect, and even work in tandem with settlers while attacking Palestinians and their property is well documented by human rights group B’Tselem.

“Settler violence against Palestinians is part of the strategy employed by Israel’s apartheid regime, which seeks to take over more and more West Bank land,” B’Tselem said in its report ‘Settler Violence = State Violence’.

“The state fully supports and assists these acts of violence, and its agents sometimes participate in them directly. As such, settler violence is a form of government policy, aided and abetted by official state authorities with their active participation,” the group said.

Palestinians like Odeh, Saleem, and Dallal all say that the state’s policy when it comes to settler violence is part of the larger attempts by the settlers, and Israel, to kick Palestinains off their land.

“These attacks are a form of ethnic cleansing,” Odeh told Mondoweiss. “The point of all of this,” he said, pointing to the debris of his shop, “is to scare us off, and make us leave our land so they can take it.”