I Was Canceled for Criticizing Israel

I contributed to The Hill TV’s “Rising” for three years. But one monologue defending Rep. Rashida Tlaib and Palestinians cost me my job. 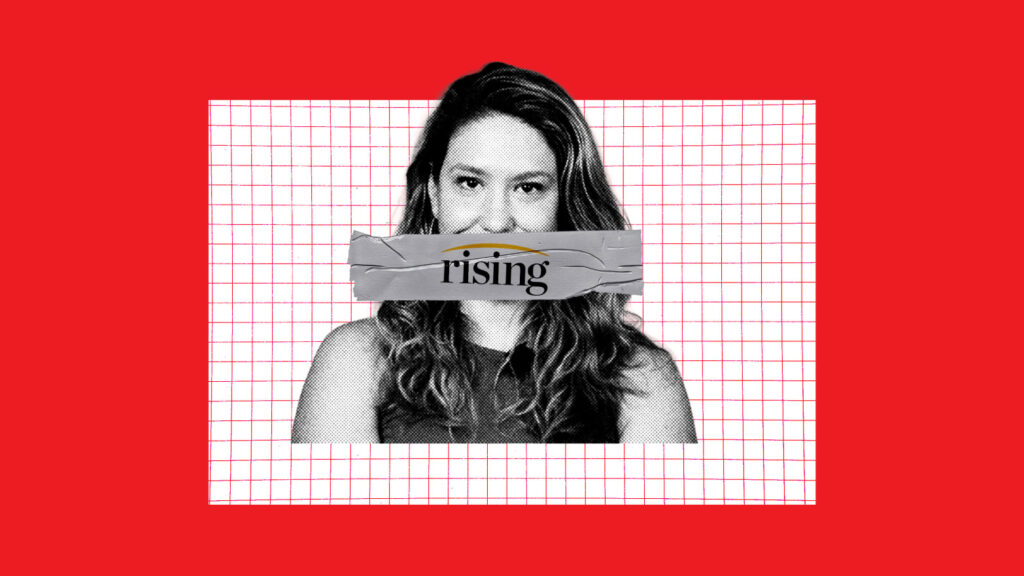 4 Oct 2022 – On Monday, September 26, I delivered a video monologue as part of my job as a rotating co-host for The Hill TV’s political commentary show, Rising. I’d been a weekly guest on the show for three years, and this was my first “Radar”—an op-ed delivered straight to the camera. It was also my last. On September 28, I was fired.

In my years as a contributor on the show, there were no complaints about my performance. I had recently begun guest-hosting and even shot a pilot for another show that I had pitched to The Hill TV (the video arm of the D.C.-based political website, The Hill).

Rising is—or is supposed to be—a show where hosts and guests from both the right and the left can say the things that are verboten on other corporate media outlets. On several occasions over my years at Rising, I had criticized Israeli government policy and the corporate media’s whitewashing of its mistreatment of Palestinians—both inside Israel and in the occupied territories. And so I assumed this would be a good, thought-provoking topic when I co-hosted last Monday.

On each episode of Rising, hosts deliver something called “Radars”—op-ed monologues delivered straight to the camera. As noted by former Rising co-host Ryan Grim, who estimated he read over 150 “Radars,” there is no editorial process. No higher-ups tweak the copy or veto the topic. The host writes the script, it’s uploaded to a teleprompter, and read in front of a camera. That’s the routine.

I focused my Monday “Radar” on the vicious attacks leveled against Michigan Rep. Rashida Tlaib for labeling Israeli’s policies as “apartheid,” and for calling out the moral contradiction among people claiming to be progressive except when it comes to Palestine. I used a clip of Jake Tapper speaking on CNN as a jumping off point.

The Video That Got Me Fired: Israel IS an Apartheid State

Tapper opened his segment by saying Tlaib was “facing criticism today for what several of her Jewish colleagues have deemed antisemitic comments.” Tapper then cut to a video clip of Tlaib’s remarks at an online event organized by Justice in Palestine Action, in which she said: “I want you all to know that among progressives it has become clear that you cannot claim to hold progressive values yet back Israel’s apartheid government. And we will continue to push back and not accept this idea that you can be ‘progressive except for Palestine.’”

Tapper responded: “The CEO of the Anti Defamation League, Jonathan Greenblatt, slammed the comments, saying that Israel does not have an apartheid government and said she should not be imposing a ‘litmus test,’ tweeting that Tlaib ‘tells American Jews that they need to pass an anti-Zionist litmus test to participate in progressive spaces.’ Some of Tlaib’s Jewish colleagues agreed. Florida congresswoman Debbie Wasserman Shultz called her comments ‘outrageous’ and ‘nothing short of antisemitic’.”

This was not the first time that Tapper insinuated that Tlaib is an antisemite and extremist. In fact, he has faced allegations of Islamophobia and anti-Palestinian bias, which prompted #cancelTapper hashtags and protests at CNN’s headquarters. I decided it was time to voice my own protest.

My monologue made the case that Israel is, indeed, an apartheid state, drawing on many different sources and authorities: the UN, the International Criminal Court, Israeli law, human rights organizations (including Israel’s own B’tselem), several Israeli politicians (including former prime ministers), and South Africa’s Nelson Mandela, Bishop Desmond Tutu, and Minister for International Relations Naledi Pandor.

I also laid out my relationship to the issue: “I was born in New York City. My great grandparents were from Eastern Europe. I could move to Israel today, buy a house, get a job, travel around with no problem. So could Jake Tapper and Jonathan Greenblatt. But a Palestinian like Rashida Tlaib can’t even visit her family home in what is now Israel.”

Rising recorded my monologue, and my work co-hosting that day’s show was done.

But as I was leaving the office I got a call from a producer who wanted me to “hear it from her” that my monologue would not be posted on The Hill TV’s YouTube channel. Higher-ups (at The Hill and/or its corporate parent, Nexstar) had seen it and decided not to run it. Apparently there was a new policy in place—of which the producer had not been informed—against opinion pieces on Israel, either written or filmed.

Over the next few days, I urged the producers to convince Nexstar/The Hill’s executives to publish the video. We also discussed the possibility of releasing the “Radar” along with a discussion between me and someone else with an opposing view. Another producer told me she was “cautiously optimistic” that we would be able to reach some kind of compromise that brought in a countering voice.

“I could move to Israel today, buy a house, get a job, travel around with no problem. So could Jake Tapper and Jonathan Greenblatt. But a Palestinian like Rashida Tlaib can’t even visit her family home in what is now Israel.”

Later, I received a call from The Hill’s editor-in-chief, Bob Cusack, saying they were not going to run the monologue. My “Radar” now killed, I asked the producers if I could cover the controversy on my weekly segment, which I was scheduled to present the next morning. I was told to check my email.

An executive at Nexstar Media had written to inform me that they would “not be needing [me] to appear on Rising.” But she generously encouraged me to “feel free to submit any unpaid invoices” and even graciously wished me “all the best.”

For three years, I looked forward to my weekly appearance on Rising. I enjoyed choosing the stories, discussing and debating them with the hosts, and, whenever possible, using humor to engage people with difficult subjects. I was grateful to work on a show that let me talk about Palestine, Latin America, the labor movement, corporate censorship, free speech, and neo-McCarthyism. My segments won a large audience, and the feedback on my hosting was overwhelmingly positive and enthusiastic—a real accomplishment in the normally toxic YouTube comments section. I had even filmed a pilot for a show that I had pitched to The Hill, which the producers were excited about and which was widely viewed.

For three years, Rising and I worked well together. But after three days of back and forth, the bosses decided they were done with me.

How are you supposed to feel when you’re canceled and fired? People in power attempting to put you in your place, disposing of you? Initially, I felt diminished. Hurt, even.

But then I considered my company:

Marc Lamont Hill, who was fired by CNN as a contributor after he called for “a free Palestine from the river to the sea” during a speech at the UN.

Angela Davis, whose award from the Birmingham Civil Rights Institute was revoked over her support of the Boycott, Divest, Sanction movement (BDS).

Political scientist (and son of Holocaust survivors) Norman Finkelstein, whose tenure was denied and reputation was tarnished by DePaul University over his criticism of Israel.

Historian Juan Cole, who was blackballed and rejected over his criticism of Israel by Yale University’s Department of History.

Journalist Nathan Robinson, who was fired as a Guardian columnist after sarcastically joking about U.S. aid to Israel.

Journalist and filmmaker Abby Martin, who was banned from speaking at the University of Georgia after refusing to sign a pledge vowing to not participate in the Boycott, Divest, Sanction movement.

Scholar Steven Salaita, who was fired by the University of Illinois at Urbana-Champaign over “disrespectful” tweets he published from his personal Twitter account criticizing Israel’s strikes on Gaza in 2014, which killed over 500 children. The good news is Salaita won a settlement against the university. The bad news is that he’s been unable to find another academic job and, as of 2019, was supporting himself as a bus driver.

I’ve been incredibly fortunate to have been showered with an outpouring of support.

After having been censored by a corporate media company which merely masqueraded as a brave and risk-taking outlet, I turned to an actually independent, brave, and risk-taking media organization, Breakthrough News. And we re-produced the video of the monologue I had originally recorded for Rising.

Rashida Tlaib, Roger Waters, Susan Sarandon, countless journalists, and supporters have tweeted, emailed, left comments expressing support and solidarity, emailed The Hill to complain, and unsubscribed from The Hill TV’s channel. The story has received media attention from people like ex-Rising host Ryan Grim, who broke the story at The Intercept, Branko Marcetic, who wrote in Jacobin about the possible troubling motives behind Nexstar Media’s censorship of criticism of Israel—as well as sites such as Mondoweiss, Common Dreams, Scheer Post, and more.

You know who I haven’t heard from? Bari Weiss, Ben Shapiro, Jordan Peterson and many of the other self-professed champions of free speech and open debate, who decry cancel culture but speak out against it very selectively.

That’s OK. I can move on. Ehren is fil tei’erer far gelt. There is more work to be done.

In the last year, several Palestinian journalists have been killed by Israeli forces. The prominent Palestinian-American Al Jazeera journalist Shireen Abu Akleh is perhaps the best-known example, which the Israeli government initially tried to cover up. But she’s not the only one. Ghufran Harun Warasneh was shot on her way to work and Yousef Abu Hussein was killed in an airstrike last year in his Gaza home.

The stories of these murdered journalists, and the future stories they did not live to report on, still need to be told. Censorship and cancellation and firings have a chilling effect—that’s their purpose. We can find our own purpose in fighting back.

What happened to me doesn’t compare to what has happened to Palestinian journalists. But knowing what they face makes me all the more determined to speak out.

Katie Halper is the host of The Katie Halper Show, a livestream podcast, and WBAI radio show and the co-host of Useful Idiots. a YouTube show and podcast. She’s written for The Nation, New York Magazine, The Guardian, FAIR, and more.