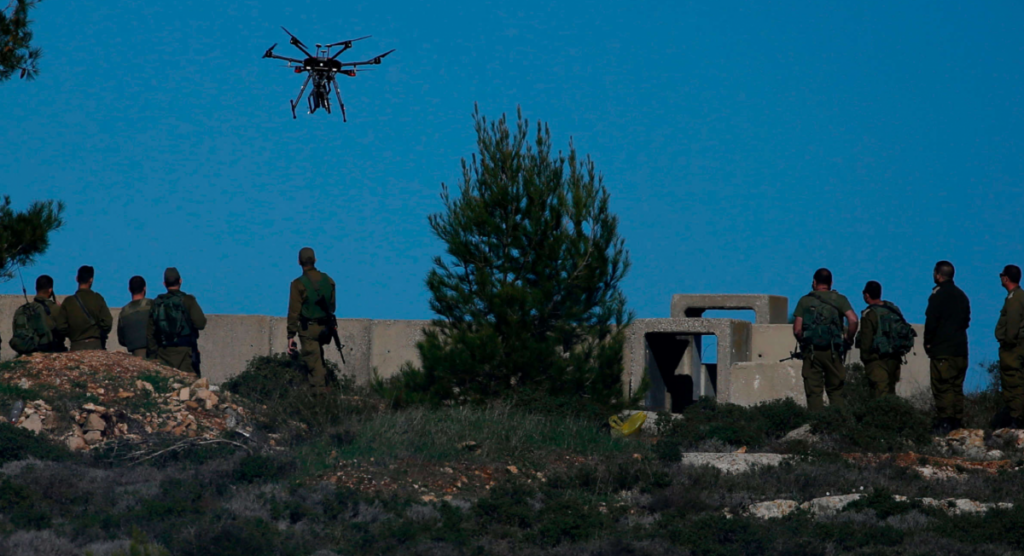 Israeli soldiers look at a drone prepared to throw gas canisters during clashes with Palestinian protestors in Ramallah, near the Jewish settlement of Beit El, in the occupied West Bank on December 14, 2018. Abbas Momani/AFP via Getty Images.

15 Oct 2022 – Commanders of the Israeli Occupying Forces (IOF) have been authorized to use armed drones to kill Palestinians in the occupied West Bank, with the approval of Chief of Staff Lt.-Gen. Aviv Kohavi.

Hamas called the order “a dangerous step” and urged Palestinians “to continue resisting the Israeli occupation with all means possible until they regain their legitimate rights.”

The authorization to expand the use of killer drones coincides with “a significant rise in shooting attacks and massive gunfire during arrest raids, specifically in the northern West Bank cities of Jenin and Nablus,” according to The Jerusalem Post. On September 28, the IOF killed four Palestinians and injured dozens more during protests in Jenin.

Since as early as 2008, the Israeli Air Force has been killing Palestinians in Gaza with drones. They have also been used to fire gas bombs and live rounds in occupied Jerusalem. Although drones have been employed for surveillance, this is the first time armed drones will be utilized in the occupied West Bank. Drones comprise 80 percent of the total flight hours in the Israeli Air Force.

Israel justifies targeting Hamas and Islamic Jihad “terrorists” with drones for “counter-terrorism” operations if armed gunmen are thought to pose an imminent threat to Israeli troops. But Israel has no right of self-defense against the people whose land it occupies. The Fourth Geneva Convention says that an occupying power has a legal duty to protect the occupied. As an occupying power, Israel cannot use military force against the occupied Palestinian people.

Under international law, the Palestinians have a lawful right to resist Israel’s occupation of their lands, including through armed struggle. In 1982, the UN General Assembly “reaffirmed the legitimacy of the struggle of peoples for independence, territorial integrity, national unity and liberation from colonial and foreign domination and foreign occupation by all available means, including armed struggle.”

In May, Palestinian-American journalist Shireen Abu Akleh, known as the “voice of Palestine,” was reporting on an illegal IOF mass arrest raid on the Jenin refugee camp when she was assassinated by an Israeli sniper. The Rome Statute of the International Criminal Court (ICC) classifies the targeting of war correspondents or journalists reporting from war zones or occupied territories by killing or physical assault as a war crime.

Although Israel initially denied that an Israeli shot Abu Akleh, it later said there was a “high possibility” that she was “accidentally hit by [Israel Defense Forces] gunfire.”

The same day that Al-Haq and Forensic Architecture released their report, the International Federation of Journalists, the International Center of Justice for Palestinians and the Palestinian Journalists Syndicate filed a complaint in the ICC on behalf of the Abu Akleh family and journalist Ali Al Samoudi who was also shot by IOF forces at the same time as Abu Akleh.

Al-Haq is one of six Palestinian human rights groups that Israel baselessly designated “terrorist organizations” and one of seven raided by the IOF in August.

“The killing of journalists is an attempt to cover up and prevent their work in documenting human rights abuse and fosters impunity for the injustices that they are seeking to cover,” said Jennifer Robinson, a lawyer for the Abu Akleh family.

The Israeli High Court of Justice (HCJ) “effectively legalizes almost every act committed by Israel’s security forces,” Ishai Menuchin, executive director of the Public Committee Against Torture in Israel, wrote in my book, Drones and Targeted Killing: Legal, Moral and Geopolitical Issues. “One can only conclude that Israel’s HCJ is one of the primary enablers of the ongoing Israeli occupation of the Occupied Palestinian Territories.”

Another enabler of Israel’s illegal occupation is the U.S. government, which provides Israel with $3.8 billion annually in military assistance. The Biden administration has refused to condemn Israel for its illegal terrorist designations and raids on the Palestinian human rights groups or its unlawful assassination of Abu Akleh. U.S. President Joe Biden has twice refused to meet with Abu Akleh’s family face-to-face.

Those who speak out against Israel’s illegal occupation face serious consequences. Progressive journalist Katie Halper was “censored and fired” by The Hill for defending Rep. Rashida Tlaib’s description of Israel as an apartheid state. Amnesty International, Human Rights Watch and the Israeli human rights group B’Tselem have all characterized the system in Israel as apartheid. The Hill is owned by Nexstar Media Group, which calls itself “America’s largest local television and media company.”

Journalists who report the truth about Israel’s crimes incur the risk of being fired or even assassinated. Neither Israel nor the U.S. government and its corporate media will tolerate any criticism of the illegal Israeli occupation.

Marjorie Cohn is a professor of law at the Thomas Jefferson School of Law, San Diego, California, and a former president of the National Lawyers Guild. In 1978 Cohn received a job in the International Association of Democratic Lawyers. Wikipedia