The documents must now be verified by the Constitutional Court and ratified by parliament. 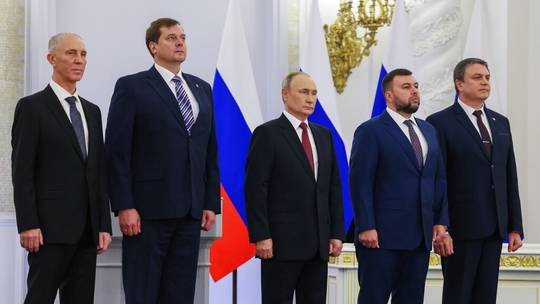 30 Sep 2022 – President Vladimir Putin has signed treaties on the inclusion of four former Ukrainian regions, into the Russian Federation. Today’s ceremony marked the start of the formal process of their accession.

Heads of the Donetsk and Lugansk People’s Republics, Denis Pushilin and Leonid Pasechnik, as well as the leaders of Kherson and Zaporozhye, Vladimir Saldo and Evgeny Balitsky, signed the documents together with Putin.

The move follows official requests by the Donetsk and Lugansk People’s Republics, as well as the two southern Ukrainian regions, which had declared independence, to join Russia. All four territories held referendums on the issue between September 23 and 27, which saw overwhelming support for the move, according to results announced earlier this week by local election committees.

In Donetsk, 99.23% of the people voted to reunite with Moscow, with Lugansk showing a slightly lower figure of 98.42%. Zaporozhye Region highly supported the idea of splitting from Ukraine and joining Russia, with around 93% of voters backing it. Some 87% voted in favor in Kherson Region as well.

The treaties will now be submitted to Russia’s Constitutional Court, which will assess them to ensure they do not violate Russian law. Once they are cleared, the agreements will have to be ratified first by the State Duma – the lower house of the Russian parliament – and then by the Federal Council, its upper house.

The lawmakers will also need to pass legislation on incorporating the two republics and two regions into Russia. The Donbass republics, as well as Kherson and Zaporozhye, will become part of Russia no sooner than the law is signed by Putin.

Yesterday, State Duma speaker Vyacheslav Volodin said that the lower house of Russian parliament would convene on October 3 to discuss a number of issues, including the treaties’ potential ratification. The Federal Council could also discuss the ratification at its regular session on October 4, the upper chamber’s head, Valentina Matviyenko, confirmed on Wednesday. “I do not see the need for extraordinary sessions,” she told journalists at the time.

In February 2022, the Kremlin recognized the Donbass republics as independent states, accusing Kiev of failing to implement the Minsk agreements, designed to give the regions of Donetsk and Lugansk special status within the Ukrainian state. The protocols, brokered by Germany and France, were first signed in 2014.

On February 24, Russia sent troops into Ukraine, citing the need to protect Donbass. It also demanded that Ukraine officially declare itself a neutral country that will never join any Western military bloc. Kiev insists the Russian offensive was completely unprovoked.

Most of the Kherson and Zaporozhye Regions were seized by Russian forces soon after the start of the conflict. Officials have repeatedly considered the idea of joining Russia since then before eventually holding referendums in September.