The Europeans Have Been Nicely Played by the Americans 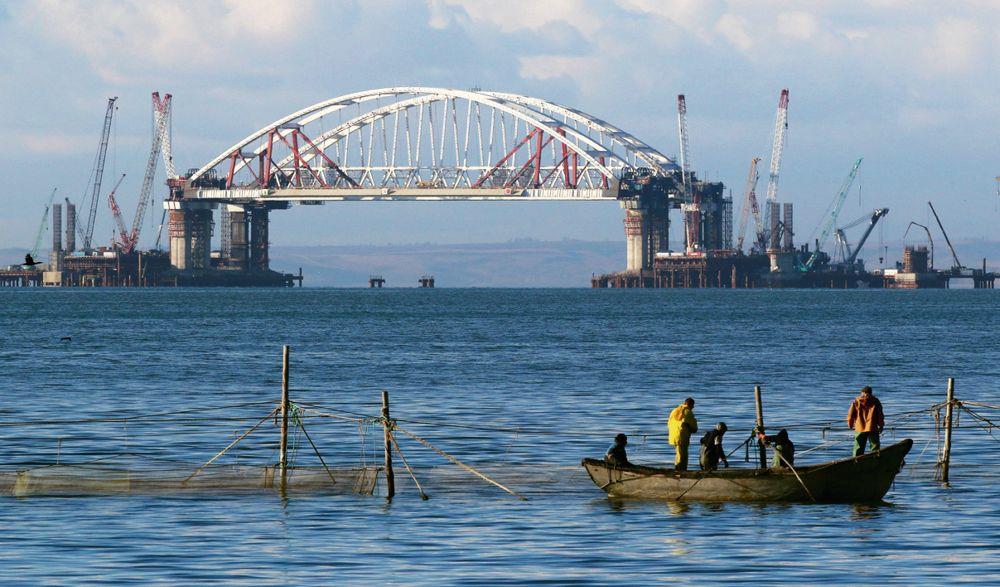 Breached: With the attack on the Crimean Bridge, Ukrainian President Zelensky has crossed a red line that Moscow had warned him against. Reuters

22 Oct 2022 – Two massive terrorist strikes misfired spectacularly and a terrible beauty is born in the Ukraine war. These two carefully planned attacks in quick succession — on Nord Stream gas pipelines and Crimean Bridge — were intended as a knockout blow to Russia. According to President Vladimir Putin, people ‘who want to finally sever ties between Russia and the EU, weaken Europe’ are behind the Nord Stream blasts. He named the US, Ukraine and Poland as ‘beneficiaries’.

India should expect the defeat of the US and NATO, which completes the transition to a multipolar world order.

Last Wednesday [19 Oct], Russia’s domestic intelligence service FSB identified Ukraine’s military intelligence chief, Kyrylo Budanov, as the mastermind behind the Crimean attack. The New York Times and Washington Post also pointed fingers at Kiev, quoting ‘sources’. While Nord Stream-1 has been crippled, one of the strings of Nord Stream-2 remains intact. Putin said last week that the pipeline could be restored and Russia could deliver about 27 billion cubic metres of gas. ‘The ball is on the side of the European Union, if they want — let’s turn on the tap,’ he said.

But mum’s the word from Brussels. It is a profoundly embarrassing moment for the EU. The triumphalism has vanished as Europe is threatened by years of recession caused by the blowback from sanctions against Russia, where the US insisted on the cut off of energy ties with Moscow. The EU has now become a captive market for Big Oil and is left to buy LNG from the US at the asking price, which is six to seven times higher than the domestic price in the US. (Contracted price for long-term Russian supply for Germany used to be about $280 per 1,000 cubic metres as against the current market price hovering around $2,000.)

Plainly put, the Europeans have been nicely played by the Americans. India should take note of the US’ sense of entitlement. Basically, the Biden administration created a contrived energy crisis whose real aim is war profiteering.

The Crimean Bridge attack of October 8 is much more serious. Zelensky has crossed a red line that Moscow had repeatedly warned him against. Putin has disclosed that there have also been three terrorist attacks against the Kursk NPP. Russians will settle for nothing less than the ouster of the Zelensky regime.

Russia’s retaliation against Ukraine’s ‘critical infrastructure’, something Moscow refrained from so far, has serious implications. Since October 9, Russia has begun systematically targeting Ukraine’s power system and railways. Noted Russian military expert Vladislav Shurygin told Izvestia that if this tempo was kept up for a week or so, it ‘will disrupt the entire logistics of the Ukrainian military — system for transporting personnel, military equipment, ammunition, related cargo, as well as the functioning of military and repair plants.’

The Americans are cocooned in a surreal world of their self-serving narrative that Russia ‘lost’ the war. In the real world, though, Ivan Tertel, KGB chief in Belarus, who has an insider view of Moscow, said last Tuesday that with Russia boosting its troop strength in the war zone — 3 lakh troops who have been mobilised plus 70,000 volunteers — and the deployment of advanced weaponry, ‘the military operation will enter a key phase. According to our estimates, a turning point will come in the period from November of this year to February of next year.’

Policy-makers and strategists in Delhi should make a careful note of the timeline. The bottom line is, Russia is looking for an all-out victory and will not settle for anything less than a friendly government in Kiev. Western politicians, including Biden, understand that there is nothing stopping the Russians now. The US’ weapon kitty is running dry as Kiev keeps asking for more.

When asked whether he’d meet Biden at the G20 in Bali, Putin derisively remarked on Friday, ‘He (Biden) should be asked whether he is ready to hold such negotiations with me or not. To be honest, I don’t see any need, by and large. There is no platform for any negotiations for the time being.’

However, Washington has not yet thrown in the towel and the Biden administration remains obsessed with exhausting the Russian military — even at the cost of Ukraine’s destruction. And, for the Russians too, there is still much to be worked out on the battlefield: the oppressed Russian populations in Odessa (which suffered unspeakable atrocities from the neo-Nazis), Mykolaiv, Zaporizhya, Dnipropetrovsk, Kharkov are expecting ‘liberation’. It’s a highly emotive issue for Russia. Again, the overarching agenda of ‘demilitarisation’ and ‘denazification’ of Ukraine must be taken to its logical conclusion.

When all that is over, Putin knows Biden will not even want to meet him. Hungarian PM Viktor Orban said last week, ‘Anyone who seriously believes that the war can be ended through Russian-Ukrainian negotiations lives in another world. Reality looks different. In reality, such issues can only be discussed between Washington and Moscow. Today, Ukraine is able to fight only because it receives military assistance from the United States…

‘At the same time, I do not see President Biden as the person who would really be suitable for such serious negotiations. President Biden has gone too far. Suffice it to recall his statements to Russian President Putin.’

India should expect the defeat of the US and NATO, which completes the transition to a multipolar world order. Sadly, Indian elites are yet to purge their ‘unipolar predicament’. Europe, including Britain, is devastated and there is palpable discontent over the US’s ‘transatlantic leadership’. Indo-Pacific strategy is hopelessly adrift. New power centres are emerging in India’s extended neighbourhood, as the OPEC’s rebuff to Washington shows. A profound adjustment is needed in the Indian strategic calculus.

MK Bhadrakumar is a former Ambassador.