Stark contradictions in West’s treatment of the Ukraine war and the occupation and siege of Palestine should serve as a wake-up call. 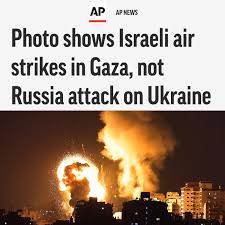 14 Oct 2022 – No one took responsibility for the explosion over the weekend that ripped through a section of the Kerch Bridge that links Russia to Crimea and was built by Moscow after it annexed the peninsula back in 2014.

But it was not just Kyiv’s gleeful celebrations that indicated the main suspect. Within hours, the Ukrainian authorities had released a set of commemorative stamps depicting the destruction.

Russian President Vladimir Putin was under no illusions either. On Monday [10 Oct], he struck out with a torrent of missiles that hit major Ukrainian cities such as Kyiv and Lviv. It was a pale, Slavic echo of Israel’s intermittent bombardments of Gaza, which are expressly intended to send the Palestinian enclave “back to the Stone Age”.

If the scenes looked familiar – an attack by one party, followed by a massive retaliatory strike from the other – the mood and language that greeted the Ukrainian attack and the Russian counter-attack felt noticeably different from what passes for normal western commentary about Israel and Palestine.

The blast on the Kerch Bridge was welcomed with barely concealed excitement from western journalists, politicians and analysts, while Moscow’s strikes on Kyiv were uniformly denounced as Russian brutality and state terrorism. That is not the way things work when Israel and Palestinian factions engage in their own rounds of fighting.

Had the Palestinians openly celebrated blowing up a bridge in East Jerusalem, a territory illegally annexed by Israel in the 1960s, and killed Israeli civilians as collateral damage in the process, who can really imagine western media reports being similarly supportive?

Nor would western academics have lined up, as they did for Ukraine, to explain in detail why destroying a bridge was a proportionate act and fully in accordance with the rights in international law of a people under belligerent occupation to resist.

Instead, there would have been thunderous denunciations of Palestinian savagery and “terrorism”.

In reality, Palestinian resistance nowadays is far more modest – and yet still receives western censure. Palestinians need only to fire a home-made rocket, or launch an “incendiary balloon”, usually ineffectually out of their cage in Gaza – where they have been besieged for years by their Israeli persecutors – to incur the wrath of Israel and the western powers that claim to constitute the “international community”.

Even more perversely, when Palestinians solely target Israeli soldiers, as they are unambiguously entitled to do under international law, they are similarly reviled as criminals.

But the double standards do not end there. Western media and politicians were unreservedly appalled by Moscow’s retaliatory strikes on the Ukrainian capital. Despite the media’s emphasis on Russia’s targeting of civilian infrastructure, the number of civilians killed across Ukraine by the wave of missile hits on Monday was reported to be low.