Plurality of Information Can Prevent War

Everywhere in the world we observe a multiplicity of media but no pluralism among them. All refer to the same sources which convey the same vision of the facts. However, we all know that if the facts exist in a unique way, the way we perceive them is multiple. Already in the 80’s, UNESCO had highlighted “information imperialism”; this way of imposing a single perception and denying all the others. Today, this domination is manifested with the News Checkers. The only way to free ourselves from this system is not to create new media, but new news agencies. 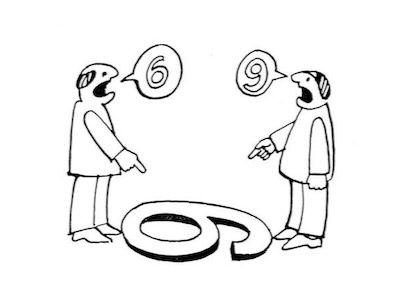 The perception of facts varies according to individuals. Here the same sign is read “6” by one and “9” by another.

29 Nov 2022 – After the Second World War, modern international law was established with the idea of countering “war propaganda” (United Nations General Assembly Resolution 110 of November 3, 1947 [1] and Resolution 381 of November 17, 1950 [2]). International legislators, i.e. sovereign states, soon agreed that war could only be fought against by ensuring the “free flow of ideas” (resolution 819 of 11 December 1954 [3]).

In recent years, however, we have witnessed an extraordinary backsliding that deprives us of the thoughts of others, exposes us to war propaganda, and ultimately leads us to a global conflict.This phenomenon began with the private censorship on social networks of the incumbent president of the United States, and continued with the public censorship of Russian media in the West. Now the thoughts of others are no longer seen as a tool to prevent wars, but as a poison that threatens us.

Western states are setting up bodies to “rectify” information that they consider falsified (Fake News) [4]. NATO is considering the creation of a unit, called Information Ramstein, which will be responsible for censoring not Russian information sources, but Russian ideas within the 30 member states of the Atlantic Alliance [5].

This is a complete reversal of the values of the Atlantic Alliance, which was founded in the wake of the Atlantic Charter, which incorporated President Franklin Roosevelt’s “four freedoms”. The first of these freedoms was the freedom of expression.

However, before the invention of the Internet, when the United States and the Soviet Union had just guaranteed the “free circulation of ideas” with the Helsinki Agreements, the United Nations and more particularly its agency in this field, UNESCO, were worried about “information imperialism”. The technical superiority of the West allowed them to impose their view of the facts on developing countries.

In 1976, during the Nairobi conference, the UN raised the question of the functioning of the media with regard to “the strengthening of peace and international understanding, the promotion of human rights and the fight against racism, apartheid and incitement to war.

Former Irish Foreign Minister and Nobel Peace Prize winner Seán MacBride formed a 16-member commission at Unesco. It included the Frenchman Hubert Beuve-Mery (founder of Le Monde), the Colombian Gabriel García Márquez (Nobel Prize for Literature) and the Canadian Marshall McLuhan (communication theorist). The United States was represented by Elie Abel, then dean of the Columbia University School of Journalism, and Russia by the director of the Tass agency, Sergei Losev. Only the fifth and final part of the report (Communication Tomorrow) was the subject of a general debate. The MacBride commission discussed the draft of the other parts, but could not question their final wording. In any event, its report, issued in 1978, seemed to be a consensus.

In fact, by pointing out that the same facts can be perceived differently and by opening up the question of the means of the media of the North and those of the South, he was opening a Pandora’s box. At the same time, Unesco was confronted with the propaganda of the South African apartheid regime and the propaganda of Israel, which denies Muslim and Christian cultures. In the end, the United States and the United Kingdom ended the debate by withdrawing from Unesco. We know today that the British Empire had ensured its intellectual domination by creating news agencies. Whitehall closed the Information Research Department (IRD) just before the MacBride report was published [6]. But the war against Syria has shown that the whole system has been reconstituted in another form [7]. Westerners continue to falsify information at its source.

In forty years, the media landscape has been transformed: the emergence of international television news channels, websites and social networks. At the same time, there has been a huge concentration of media in the hands of a few owners. However, none of the problems listed in 1978 have changed. On the contrary, with the unipolar world, they have become worse.

The journalistic profession today consists of either writing agency reports or contextualizing the news for the media. News agencies are factual and unsourced, while the media offer commentary and analysis by referring to news agencies. Contextualization requires a great deal of historical, economic and other knowledge, which today’s journalists are largely lacking. The immediacy of radio and television does not give them the time to read books and even less to consult archives, except during in-depth investigations. Commentary and analysis have thus become considerably impoverished.

The dominant ideology in the West, which tends to become “global”, has become a religion without God. There are now only two camps: that of the Good and that of the apostates. Truth is determined by a consensus among the elites, while the people reject it. Any criticism is considered blasphemous. There is no more room for debate and therefore for democracy.

The alternative press has become just as poor because it relies on the same data as the international media: news agency reports. It is indeed enough to control AFP, AP and Reuters to impose a vision of the facts on us. You can season it according to this or that tendency, Republican or Democrat, conservative or progressive, etc., but it will always be the same dish.

Since the September 11 attacks, those who challenge the official version of events have been called “conspiracy theorists ». Since the election of Donald Trump, those who contest the data of press agencies are accused of distorting reality and imagining Fake News. Journalists, after refraining from relaying the thoughts of “conspiracists”, i.e. dissidents, try to correct Fake News with Checked News.

Yet, at the same time, belief in the versions of the mainstream media has collapsed. In the United States, the Gallup Institute has been measuring trust in the print media since 1973 and in the broadcast media since 1993. Trust in newspapers has fallen from 51 percent to 16 percent, and trust in radio and television has fallen from 46 percent to 11 percent. The only solution is to increase the number of news agencies, i.e. the sources of information. Not to make them numerous, but diverse. Only then will we realize that the way an event is reported determines the way we think about it.

For example, today the three news agencies mentioned above present the conflict in Ukraine as a “Russian invasion”. They claim that Moscow has not been able to take Kiev and overthrow President Zelenky, but commits war crimes every day. This is one way of looking at it. We don’t have the means to publish dispatches all the time, but we publish a weekly identical bulletin [8]. Our criterion is different. We refer to “International Law” and not to Western “rules”. Therefore, we describe the same conflict as the application of the Security Council resolution 2202 and the “responsibility to protect” the oppressed populations since 2014. The events are the same, but for some the way they tell them leads to think that the Russians are wrong, while ours leads to think that the Russian position is legal. To tell the truth, there is another difference: we interpret the facts over time. For us and for the Security Council, there has been a civil war in Ukraine for eight years with 20,000 deaths, the three major agencies pretend to ignore it. For us, the “integral nationalists” have a long criminal history, having cost the lives of 4 million of their fellow citizens, the Western agencies also pretend to ignore it [9].

This difference can be applied to all subjects. For example, the major news agencies tell us that the West has imposed sanctions to punish Russia for invading Ukraine. We do not read events in this way. Once again, referring to “International Law” and not to Western “rules”, we note that the decisions of the Anglo-Saxons and the European Union violate the UN Charter. These are not “sanctions”, since there has been no judgment, but economic weapons to wage war against Russia, just as castles were besieged in the past to starve those who had taken refuge there.

Each difference in the interpretation of events provokes another. For example, when we point out that the Western pseudo-sanctions have not been endorsed by the Security Council, we are told that this is quite normal since Russia has a veto right in the Council. This is to forget why the UN was organized the way it was. Its purpose is not to say what is right, but to prevent wars. This is precisely what allowed the Council to adopt resolution 2202 to resolve the civil war in Ukraine. However, the West, despite the commitment of Germany and France, did not apply it, forcing Russia to intervene.

We could go on endlessly with this double reading. The important thing to remember is that the presentation of the facts radically changes the way they are perceived. To conclude, I invite you to find news agencies that describe the facts in their own way and not in the way of our leaders. It is in this way and not by glossing over biased information that we will regain our lucidity.

[3] “Strengthening of peace through the removal of barriers to free exchange of information and ideas”, Voltaire Network, 14 December 1954.

[7] “The fabrication of the myth of the “Syrian revolution” by the United Kingdom”, by Thierry Meyssan, Translation Roger Lagassé, Voltaire Network, 25 February 2020.