Qatar’s World Cup Is a Lavish Exercise in Sportswashing

1 Dec 2022 – Regardless of whether one calls it soccer or football, the FIFA Men’s World Cup tournament underway in Qatar may be the most-watched sporting event ever. It’s predicted that by the time the month-long tournament ends on December 18th, half the world’s population will have tuned in. One million fans are expected in this small, scorching desert peninsula in the Persian Gulf to watch teams from 32 nations compete. Since FIFA awarded Qatar the games back in 2010 (in a process suffused with corruption and bribery), planning and construction has occurred at a frantic pace. Seven massive new stadiums, a metro system, new roads, 100 hotels, over 100 practice fields and more have been built, almost exclusively by migrant laborers who work in Qatar with virtually no rights. The torturous, extraordinarily hot working conditions endured by workers are believed to have caused thousands deaths.

Abdullah Al-Arian, history professor at Georgetown University in Qatar said on the Democracy Now! news hour, “Football goes back to the colonial days, when it was being introduced by British and French officials as a way of instilling discipline and ‘civilizing’ the local populations.”

Qatar’s treatment of foreign workers is another consequence of colonialism. The “kafala system,” Al-Arian explained, “was the kind of migrant labor governance structure…put in place initially by British colonial authorities at a time when they were trying to preserve their own interests.” He went on, “They wanted to tie all of the migrant workers to their sponsorship, meaning that their employer would dictate the extent to which they would be allowed in the country, for how long. Things like changing jobs were not permitted without the permission of the employer. There was no real protection over things like a minimum wage or even safety considerations…this was a system that was then inherited by all of the independent states in the Gulf.” 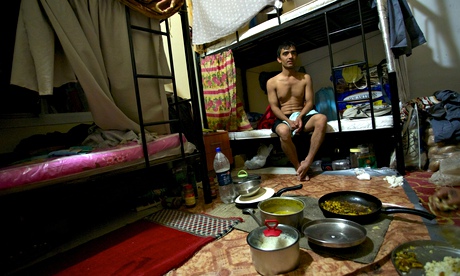 A worker formerly employed on a project to fit out offices in the Al Bidda Tower who now lives and works illegally after the company that employed him collapsed and failed to pay him for a year.
Photograph: Pete Pattisson for the Guardian

“We visited the labor camps, and what we saw was just unbelievable,” Dhungana said. “More than 50 migrant workers are living in the 12 to 14 rooms with very little facilities—no running water, no AC in several places. They are living in very squalid conditions…50 people have to queue up in the morning to use one toilet.” He concluded, “We expect to see more people will die working in the stadiums than the number of players playing in the Qatari stadiums.”

Geopolitics have also impacted the games. Qatar is an absolute monarchy. Like many dictatorships around the world, it enjoys the full backing of the U.S. government. Centcom, the U.S. military’s Central Command, has its forward headquarters just miles outside of Doha, at the Al Udeid Air Base. It’s the largest U.S. military base in the Middle East, and only about 150 miles from Iran.

A U.S. soccer team social media post depicted the Iranian flag without the emblem of the Islamic Republic, to show solidarity with women protesters in Iran. Iran responded by demanding the U.S. be ejected from the World Cup. Meanwhile, the Iranian team itself took a courageous stand, refusing to sing their national anthem, ostensibly in solidarity with the protesters back home.

The international athletes and tourists flooding Qatar have also come into direct conflict with the ruling monarchy’s deep-seated intolerance. Homosexuality is illegal in Qatar. On the eve of the games, FIFA banned “One Love” rainbow armbands that several teams were promising to wear to express solidarity with the LGBTQ+ community.

“We’re definitely seeing sportswashing, where political leaders are using the sports event to try to deflect attention from human rights,” Jules Boykoff, a former U.S. Olympic and professional soccer player said on Democracy Now!. “FIFA should…give some money to migrant workers and their families who haven’t been paid properly. Some of them have died, and they haven’t received proper compensation. So, if you win the World Cup, your team gets $42 million. That should be the bare minimum that should be then thrown in the direction of these families who have suffered so greatly because of the World Cup, that is giving so many people around the world so much joy.”

In a recent Op-Ed on the World Cup published in the New York Times, Abdullah Al-Arian quoted Palestinian poet Mahmoud Darwish, who wrote,”soccer is the field of expression permitted by secret understanding between ruler and ruled in the prison cell of Arab democracy.”

Soccer is called “the Beautiful Game,” but the 2022 World Cup should serve as a reminder that for many in the world, the fight for human rights, workers rights and equality is not a game. It is deadly serious.