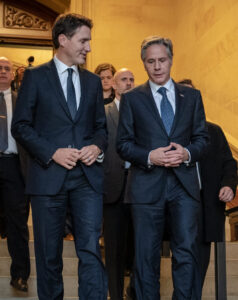 28 Nov 2022 – Six weeks after Haiti’s de facto government requested a foreign military intervention amid unprecedented levels of insecurity and the United States began work on a UN Security Council resolution authorizing a “rapid action force,” regional leaders are speaking out in opposition to the plan. Over the past few weeks, multiple countries, including Canada, which the US had hoped would lead such a mission, have said that political changes are a necessary first step. At the same time, as the weeks pass, the mandate and scope of a possible foreign military intervention appears to be changing.

“The security situation cannot be divorced from the political situation,” Ralph Gonsalves, prime minister of St. Vincent and the Grenadines, told the press following a meeting between US, Canadian, and CARICOM leaders in mid-November. He said that first, Haitian actors would need to come together and define the path forward.

“Unless you address that political question of a national dialogue bringing about this government of national unity, an inclusive government, you’re not going to be able to solve properly the security question because any security force which goes in there would be looked at with suspicion as though they’re propping up the current Haitian government,” the Western Hemisphere’s longest-serving political leader explained.

Gonsalves said that some countries instead favor a rapid response, not contingent on any political accord, and, he explained, those countries have been heavily lobbying CARICOM nations to get their support for such a mission. “Well, one thing I’ll tell you, St. Vincent and the Grenadines will not be sending any police in that situation because I don’t want anybody to interpret us as going to send the police there to help to prop up the government,” he said.

Though he did not mention any other countries by name, the reference is likely to the United States, which has remained a steadfast ally to Haiti’s de facto prime minister, Ariel Henry. While the US has been the most vocal proponent of a foreign-led security mission in Haiti, it has thus far refused to contribute its own personnel and has been persistently reaching out to other nations in the hope of finding a third party to take the lead. Those efforts have focused primarily on Canada, and included a visit to Ottawa by Secretary of State Antony Blinken last month.

Canada, while not explicitly rejecting the idea that it could lead such an intervention, has said it is considering its options. But, last week, Prime Minister Justin Trudeau publicly backed Gonsalves’s analysis.

“It is not enough for Haiti’s government to ask for it,” Trudeau said. “There needs to be a consensus across political parties in Haiti before we can move forward on more significant steps.” The Canadian leader once again said his country was open to participating in a military intervention, but that “we must have a Haitian consensus” first.

The US has approached a number of other countries about participating in such a mission, including Brazil, which led the last United Nations military force in Haiti, MINUSTAH, from 2004 to 2017. Diplomatic cables published by WikiLeaks reveal that, at the time, the US sought to find a third-party country to lead the UN mission as a way to save money and outsource its control over Haiti. “Without a UN-sanctioned peacekeeping and stabilization force, we would be getting far less help from our hemispheric and European partners in managing Haiti,” the then ambassador wrote in 2008.

But it appears Brazil has little appetite in returning to Haiti now. “Any Brazilian participation would be difficult, overall in a multinational force,” Celso Amorim, Brazil’s former foreign minister and a top advisor to president elect Lula da Silva, told Reuters. “We made an enormous effort that brought us a lot of problems, even internally,” he said.

Of course, obtaining UN authorization at all remains a question mark. China and Russia, who both hold veto power at the Security Council, have expressed skepticism. Last month, the Miami Herald reported that the US was “planning contingencies for a multilateral force that would enter Haiti without formal U.N. authorization,” though it is unclear if that could mean the deployment of US military assets.

What is clear, however, is that the US appears committed to at least some sort of foreign security intervention in Haiti. In closed-door meetings in recent weeks, US officials have repeatedly indicated their optimism that something will be done.

“We’re very supportive of something to be done for Haitian people,” Gonsalves, the St. Vincent & the Grenadines prime minister said. “But you have to learn properly the humanitarian, the security and the political. You can’t just link humanitarian and security and forget the political and there is a lot of tactical confusion because there is no strategic clarity.”

The military intervention was initially framed as a “rapid action force” that would help unblock the country’s main fuel terminal in Port-au-Prince and help to resolve the immediate humanitarian situation. “This resolution will propose a limited, carefully scoped” mission, Linda Thomas Greenfield, the US Ambassador to the UN, told the security council in mid-October.

However, more than a month has passed and the fuel terminal has been operational for two weeks. Meanwhile, the scope of a possible mission appears to have expanded.

“There continue to be longer-term challenges that an enabling force authorized by the UN Security Council would be able to help address,” State Department spokesperson Ned Price said, in response to a question about if the resumption of fuel deliveries had lessened the need for an intervention. Thomas Shannon, a former high ranking US diplomat, suggested that what Haiti really needs is a long-term “state-building” mission akin to U.S. efforts in Afghanistan.

After initially saying the plan would be ready by early November, last week, the Miami Herald reported that the US sees little hope for progressing its UN resolution over the holidays — pushing a potential timeline out until early in 2023. “A second U.S. official said that the plan is not dead, but that the formation of such an ambitious military mission would take time,” the Herald reported.

Nobody, it seems, has any idea what this military endeavor would actually look like. A spokesperson from the French embassy told Politico: “To date, the contours of this possible intervention force have yet to be specified.”

“The problem is that nobody really believes that you can restore order and leave quickly,” Richard Gowan of the International Crisis Group said earlier this month.

In 2004, following the February coup d’etat against Jean-Bertrand Aristide, the de facto government requested urgent foreign military assistance. The same day as Aristide was flown into exile, the Security Council authorized the deployment of a three-month multinational force led by the US and Canada. That, however, was always just a stop gap measure while longer-term preparations for the arrival of the UN Blue Helmets took place. That mission stayed for 13 years.

Though pitched to the world as a fine-tuned intervention only to help address a dire humanitarian situation, the US’ failure to find immediate support has revealed what has likely been the case all along: any military intervention is likely to morph into yet another long-term, foreign-led attempt at nation building in Haiti.

Jake Johnston is a Senior Research Associate at the Center for Economic and Policy Research in Washington, D.C.