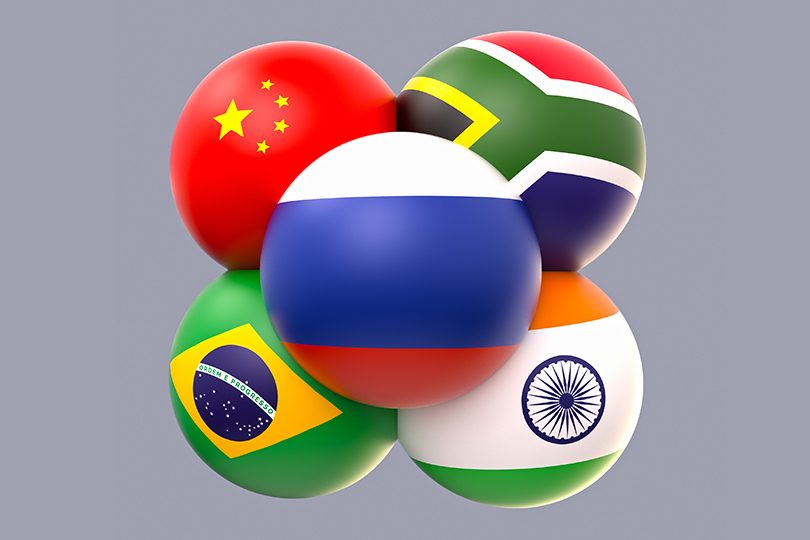 20 Dec 2022 – Despite frequent skepticism, the BRICS have come a long way. From a loose label given by investment bankers to four emerging economies in 2001 (Brazil, Russia, India and China), to a semi-formal group (adding South Africa in 2010). True, the differences between these five states have often hindered them from acting in concert; but they have still deepened their relationship with regular meetings at all levels (from leaders’ summits to scientific cooperation), and jointly-run institutions (such as a multilateral development bank, the NDB). This year a variety of countries, from Argentina to Iran, applied to join. But what does Russia get out of it – especially now?

Economic ties between its members have certainly increased, but still remain modest; so the explanation is often attributed to geopolitical clout. Bobo Lo, for example, argued in 2015 that  “what is most important to the Kremlin is the imagery of BRICS summitry.” This is because , first, “[it reaffirms] – to the leadership, the Russian public, and a wider international audience – that Russia naturally belongs to the global elite”; and, second, it “[conveys] that Russia is part of the dynamic group of ascendant powers, in contrast to a decaying and discredited West.” This is a common thread in the literature, with Alexander Sergunin terming this a “soft power” strategy, and André Gerrits a “brand-strengthening” one. This certainly was observable as this last June’s BRICS Summit, which a major Indian outlet remarked “was the first meeting of such a grouping including Russian President Vladimir Putin since the invasion of Ukraine – giving the message that Russia is not isolated” – a framing echoed by the Wall Street Journal, among others.

Such a view endorses one side of a scholarly and policy debate – that Russia’s overall behavior is motivated more by status-assertion than security-maximizing. The latter refers to a more rationalist and materially-grounded conception of safeguarding territorial integrity, and the survival of the Russian polity itself. This is not an abstract distinction, and has direct policy implications, as Olivier Schmitt argues: security motivations can be assuaged through “cooperation mechanisms . . . from exchanges of information to arms control agreements”; meanwhile, “status concerns are relational and often satisfied at the expense of other actors.”

This point is all the more relevant now, as policymakers still struggle to decide how best to handle relations with Russia as its war on Ukraine impacts the entire world. In this sense, Russia’s continued and firm commitment to the BRICS project reinforces the status-seeking thesis, and can help states calibrate their approach to this area accordingly. Yet, however useful this distinction might be, stopping one’s analysis here leaves too many potentially crucial factors on the table. A fundamental point cited by Lo above, “the Russian public,” hints at a world of further possibility—but it is left undeveloped.

This is all the more relevant because, if status-asserting abroad is Russia’s chief aim with the BRICS, then its success is highly debatable. The aforementioned Summit might have signalled Russia’s relative non-isolation, but its outcome document still did not explicitly mention the US nor its sanctions regime, as Vladimir Putin and Xi Jinping’s speeches had days before; which can be read as a sign that other members pushed to water it down. Regarding sanctions, even Chinese and Indian banks, as well as the China-led Asian Infrastructure Investment Bank and the BRICS’ own NDB, have suspended lending to Russia. Similarly, the BRICS’ reserve-pooling mechanism, the Contingency Reserve Agreement, has not come to Russia’s aid.

It is true that, in March, India, China and South Africa abstained on a UN General Assembly resolution condemning Russia’s invasion of Ukraine, with only Brazil voting in favor. But this is still less support than Russia saw from them in 2014, when all the other BRICS abstained from UN votes condemning its annexation of Crimea, and used much more direct and more supportive language on the matter. Even China, the BRICS member with the least equivocal (but still less than full-throated) rhetoric toward Russia, has still shown a willingness to express “questions and concerns” to Putin about the conflict, as he admitted.

Thus, rather than gaining status, Russia’s own peculiar decisions (such as invading Ukraine) are tied to its decreasing reputational dividends even among this relatively friendly group. Must it be so? Rachel Salzman’s 2019 book BRICS and the Disruption of Global Order adds to the discussion by historicizing it – that is, Russia’s BRICS strategy has significantly varied over time. Salzman argues that Russia used the group first as a “bridge” to the West, then, more recently, as a “bulwark” against it. The “bridge” phase was a part of the country’s relative turn to the West during Dmitri Medvedev’s presidency (2008–12), “nested within a firm argument that Russia is an integral part of the Euro-Atlantic world.”

This began to change when Putin returned to the presidency, and even more so after 2014. Such a dimension helps to avoid the sort of essentialism that can affect both a rational security-maximizing and status-sensitive approach, if overly focused on external, geopolitical forces. However, Salzman claims that Putin’s rationale for choosing more West-friendly Medvedev as president “remains unknown.” This returns us to the importance of the domestic sphere in shaping status concerns in the first place.

Alexei Tsygankov’s theory of Russian foreign policy, for one, is centered on the interplay between such foreign and domestic dynamics. It holds that the prism which is consistent across all Russian foreign policy regimes is the country’s relationship to the West – identifying with it, defining itself against it – but always something related to it. For example, Tsygankov presents the Mikhail Gorbachev (1985–91) and Medvedev (2008–12) governments, as well as Boris Yeltsin’s first term (1991–96), as periods of relative rapprochement with the West, due to domestic political conjunctures whereby those favoring that approach prevailed in government. In the latter case, Tsygankov argues that the Medvedev pivot was a reaction to the global financial crisis’ impact on the Russian economy, discrediting the ruling orthodoxy and requiring an olive branch to the West. This trans-historical through-line vindicates and reinforces Salzman’s evolutionary argument, and can serve to harmonize the aforementioned status vs security dichotomy – that is, the dominant logic varies over time, depending on the Russian political situation as well as external factors.

Jeanne L. Wilson, in 2019 article on the Russia-China relationship concludes, for example, that “the relationship with China contributes to Russia’s self-identified status as a great power, which functions as a pillar of regime legitimacy for the Putin government.” But Wilson’s more fundamental insight is that “the regime’s commitment to project Russia as a great power to its citizens can often take precedence over tangible foreign policy goals.” Indeed, relying on Russian scholars, media outlets and polls (the latter showing, for example, that 82% of Russians believe preserving their country’s great power status should be a priority), she argues:

While Wilson focuses only on one of the BRICS, it is not a stretch to apply this framework to Russia’s relations to its other members, especially considering the aforementioned existing literature’s emphasis on the scarce material as opposed to reputational gains it reaps therefrom. Such an argument deserves engagement, as it turns the usual terms of said literature on their head, and can greatly complement its analysis.

Acknowledging the crucial role of reputational concerns in Russia’s foreign policy has been a significant step in the scholarship, but it can be taken further by historicizing the variations in this behavior, as well as incorporating the multiple layers and audiences that mold it. Doing so also allows scholars and practitioners to gain insights into the vast body of work on Russian politics and society – largely obscured by an overly geopolitical framing. This also has direct policy implications, such as regarding the current war. Conflict scholar Hein Goemans, for example, already makes a probing domestic-foreign connection by arguing that the often-proposed “off-ramp” for Putin to deescalate and potentially cease hostilities neglects audience costs that could involve his own assassination.

As to the BRICS, given that the group is not going away anytime soon (especially with the return of Lula to Brazil’s presidency), and that Russia’s reliance on the group will only increase as this war drags on, anyone wishing to understand this relationship, let alone engage with it, would benefit from this more expansive analytical starting point.

Lucas Dias Rodrigues dos Santos is a PhD candidate at the Geneva Graduate Institute. His current research focuses on efforts to change the process of multilateral diplomacy, with a special attention given to differing visions of global governance democratization.